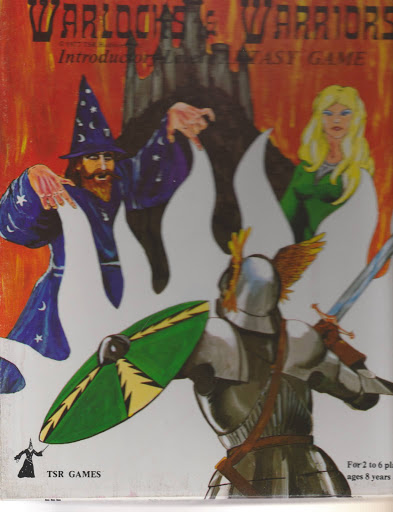 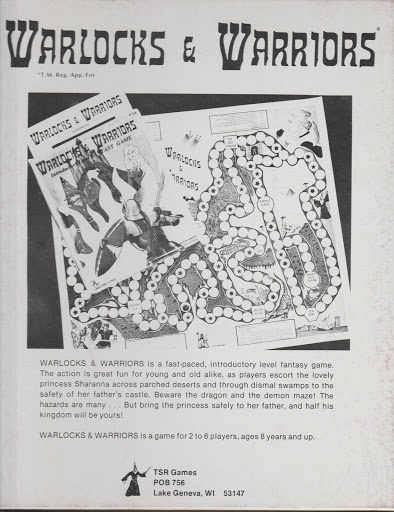 As my Marie Kondo deathmarch through my shelf-full of early TSR boardgames I've had for years and for the most part never played  continues, we come to WARLOCKS & WARRIORS (1977), product #1003.

This turns out to be yet another of TSR's confusing array of intro-level games (this one retooling the target audience down to age 8 & up), with this particular entry complicating that tangled history just a little more.

It also turns out to be another of the games designed by fantasy authors Gygax liked (the 'Famous Authors' or 'Famous Writers' Series),  like de Camp's COHORTS and, presumably, Leiber & Fischer's LANKHMAR .

In this case the sword and sorcery writer in question was Gardner Fox--who though remembered today primarily as a third-rate Conan imitator* was clearly a favorite of E. Gary G.**

The basic idea underlying this game is paring down the character classes to just two: Warlock (magic-users) and Warrior (fighter). The best thing about it, looking back from the present day, is the Dave Sutherland art, which is reminiscent of the art towards the end of the DMG depicting an adventuring group's up and downs in their explorations.

As for the game itself, the puzzle is why did they need this when they had Megarry's DUNGEON  (which is in fact advertised on the last page of WARLOCKS & WARRIORS' rulesheet)?

Just as an aside, I shd record that my copy was a gift from Slade Henson (June 7th 1994). Slade was at that time downsizing his own collection. It's perhaps amusing to note that Slade credited his having such a nice collection to his having arrived in Lake Geneva to start work at TSR (circa 1989?) on the same weekend that Frank Mentzer had a big garage sale . . .

*Fox's main claim to fame are not his fiction but his work in comic books: he played a major role in the creation and scripting of ADAM STRANGE.

I shd have included in the post above information from Zenopus's comment on my earlier post re. COHORTS: Roman Checkers. It is clear from Z's additional researches that the three works so listed as belonging to this series are

Thanks to Zenopus A. for clarifying this.