So, I've finally finished Ruth Franlin's biography of Shirley Jackson (A RATHER HAUNTED LIFE), after picking it up again upon our return from Arkansas.*

In the course of doing so, I came to realize that Jackson and her husband (the critic Stanley Hyman) were biblioholics.** That is, they bought books -- not unusual in people who wrote stories and reviewed books for a living. But the Hymans did so at a scale which suggests that they enjoyed buying books just as much as they did reading them:

"Shirley and Stanley's main source of books, aside from review copies that poured in from The New Yorker and elsewhere, was the Seven Bookhunters. This group of men traveled around the country buying books from secondhand bookstores and reselling them, often at a high markup . . . Whenever Stanley and Shirley needed an obscure, out-of-print or otherwise hard-to-obtain title . . . they put in a special request to Scher*** . . . [who] was 'as familiar with secondhand bookstores . . . as a policeman is with his beat' . . .
Stanley was accorded the ultimate privilege: every year he accompanied Scher on a book-buying trip, sleeping in cheap hotels or on the benches of railway stations, eating and drinking with Scher's friends along the way, and buying as many as a thousand books."
(Franklin p. 273-274)

As many as a thousand books a year: that's a lot of books. And they seem to have kept just about everything they bought: Franklin reports that at the time of Jackson's death (from a sudden heart attack at age forty-eight) they had at least twenty-five thousand books, maybe more (Franklin p. 273)

Elsewhere it claims that Hyman knew exactly where every book was (p. 79), but I'm skeptical on this point.

Perhaps the biggest surprise that emerged from reading this biography was learning that Jackson in her life time was famous for two kinds of fiction: the unsettling psychological horror of "The Lottery", THE HAUNTING OF HILL HOUSE, and WE HAVE ALWAYS LIVED AT THE CASTLE, and also for comic accounts of life with a houseful of kids (think PLEASE DON'T EAT THE DAISIES, which comes from about the same era). Those latter books and stories are entirely forgotten now, but it's interesting to learn of an author with two distinct reputations, one of which endures and the other vanished away. 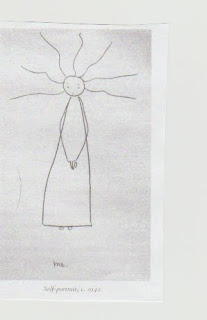 (2) here's an evocative  fragment from a poem written by Jackson's pen-friend Jeanne Beatty:


make me a charm
so the dark won't find me
and the frightful things
rise up behind me.
(p. 433)

(3) finally, here's a witty clip from one of Jackson's short stories:


I have never liked the theory
that poltergeists only come
into houses where there are children,
because I think it is simply too much
for any one house to have
poltergeists and children
--Shirley Jackson, mother of four (p. 304)

*where I'm happy to report that the courthouse square in my hometown now has not one but two coffeehouses. Go Magnolia.

**cf. the hilarious but all-too-true book BIBLIOHOLISM: THE LITERARY ADDICTION

Thought of the Day (Evening Edition)

Colds: They're not over when you think they're over.

Sorry all for my laggardliness in posting: first I got busy, then distracted, then was off to Arkansas, rounding this all off with a cold that had me going the Dayquil/Nightquil routine. I'm now on the mend and shd be back to posting tomorrow.

Thanks to all for the comments, which shd now all be up; my responses shd also be up sometime tomorrow.

So, it's been sixteen years since we brought Hastur home from the pet store, a tiny adorably gooney torbie kitten just a few weeks old. Over time she's gone from being our middle cat (of three) to a solo senior. 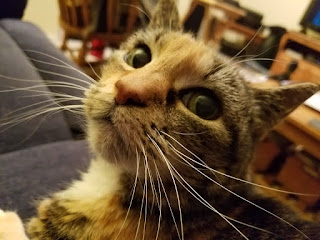 Hastur at her most Salvador Dali-ish, demonstrating her prodigious whiskers
Posted by John D. Rateliff at 8:53 PM No comments:

Is There a Leiberist in the House?

Or, even better, a Fischerian?

I've been trying to sort out which of the early drafts and fragments of Fafhrd & the Gray Mouser stories have been published in recent years. I know about three:

(1) ADEPT'S GAMBIT, by Leiber, a complete early draft of which was published in 2014 with an extensive commentary by H. P. Lovecraft. I have and have read this.

(2) THE GRAIN SHIPS, also by Leiber: a fragment of a novel set in Hellenic times that was eventually reworked and completed by Leiber and published as THE SWORDS OF LANKHMAR. Apparently this fragment was published a few years ago in a collection of misc. writings by L; I've ordered a copy of said book and shd soon have the answer to that one.

(3) QUARMALL, by Harry Fischer. This was eventually taken up by Leiber and used as the core of his THE LORDS OF QUARMALL. What I'd like to know is if Fischer's early version has ever been published, and if so where.

Anyone know the answer to this one?

Shirley Jackson was One of Us

So, a little more poking about in the Shirley Jackson biography (A RATHER HAUNTED LIFE, by Ruth Franklin) shows that though she does not seem to have written fantasy herself deplored the trend towards realistic children's fiction, having herself grown up on the Oz books. When she discovered that her daughter "had a series of dreams about an imaginary country, Shirley encouraged her to draw maps of it and (perhaps recalling the language she once invented) make up languages spoken there." (Franklin p.166).

The reference to Jackson's invented language harkens back to her college days at the University of Rochester:


Rather than following her syllabi, Jackson pursued
her own intellectual interests: at one point she spent hours
devising an invented language called Lildsune, complete
with grammatical rules, and even wrote poetry in it.
(Franklin p. 58)*

No wonder she liked Tolkien!

But the story about Jackson I liked best was The Dime of Wind:


When eight-year-old Laurence asked his mother how
he ought to spend a dime, she suggested that he give it
to the birch tree in front of their house. He promptly went
outside and asked the tree for a dime's worth of wind.
To Shirley's amusement, a massive hurricane struck that night.
"All we could figure was that wind must be very cheap indeed
for him to get that much for a dime" she wrote.
(p. 166)

*apparently Jackson's Lildsune material is now in the Library of Congress
Posted by John D. Rateliff at 7:10 PM No comments: