WIll the Circle Be Unbroken? (3)

Well I followed close behind

I tried to hold up and be brave

But I cd not hold my sorrow

When they laid her in the grave.

Will the Circle Be Unbroken? (2)

Well I told that Undertaker

Oh that body that you're carrying

Lord, I hate to see her go.

Posted by John D. Rateliff at 4:29 PM No comments:

Will the Circle Be Unbroken? (1)

I was standing by my window

And it was a cold and cloudy day

When I saw that hearse come rolling

For to carry my mother away.

Posted by John D. Rateliff at 9:05 PM No comments:

So, today we avoided the worst of a winter storm and drove down from Little Rock. Many meetings followed, and a lot got done. More soon.

*'selected', in this case, by The Voice of the People (e.g., internet fans).  About eight stories in; really enjoying it so far.

Posted by John D. Rateliff at 9:08 PM No comments:

Thought of the Day:

if all the shuttle services shut down for the night a half-hour before your flight lands.

current reading: BROWN GIRL IN THE RING, which continues to unimpress.

P.S., THE WIFE SAYS 'you might let them know I did get there'

Posted by John D. Rateliff at 8:51 PM No comments:

What's Wrong with This Picture?

So, thanks to the friend (Hi, D) who showed me a cover scan she found online of my book RETURN TO BAG END, the second half of THE HISTORY OF THE HOBBIT. Can you spot what's wrong with this image? 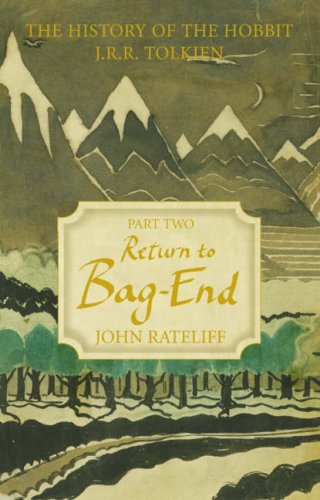 Here's a clue:: what's wrong with the image above is right in the image below: 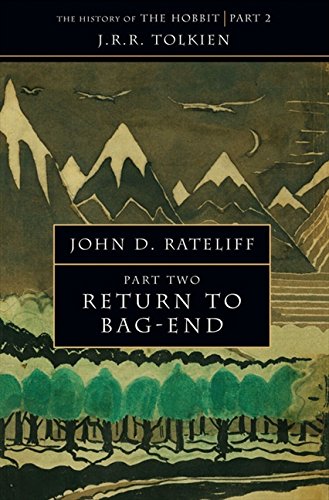 --current reading: a light novel, plus a little ways into  N.Hopkinson's BROWN GIRL IN THE RING (which might I suppose be called a heavy novel).

The Countdown to September

So, thanks to a recent (Feb. 10th) article in VANITY FAIR, of all places, a general overview of the forthcoming Amazon Tolkien is finally being made available, with images and snippets about many of the characters. The release date is September 2nd, so we have plenty of time to speculate, debate, and argue.  The most interesting detail for me is that they've taken the Shakespearean option, collapsing the events of the Second Age into one human lifetime.

Also new to me was word that a second Tolkien film project is also in the works, this one an animated film about the Rohirrim at the time of Helm Hammerhand; it's due out in 2024. Since the RINGS OF POWER project is supposed to run for multiple seasons (five I think) this seems to indicate that they want to have multiple projects coming out either staggered or at more or less the same time.

Get Over It, Ahab

The captain of the Audaine, Wush Oleander . . . came with an unusual prosthetic,

apparently an entry requirement for the job. In his case, it was a scrimshaw

left hand, beautifully carved to show a tiny vignette of a screaming Captain

Oleander dangling by the stump of his wrist from the jaws of a great sea serpent.

[One traveller] was particularly taken with it, and plied him with questions

about the event, and whether Oleander was filled with an obsessive desire

to pursue the sea serpent to the four corners of the Dreamlands, seeking vengeance,

but Oleander just looked at him askance, and said, no, these things happened and

you just had to accept them.

--satisfaction of never having to read again: KIM (Kipling) or LITTLE BIG (Crowley).

The Cat report (this week) 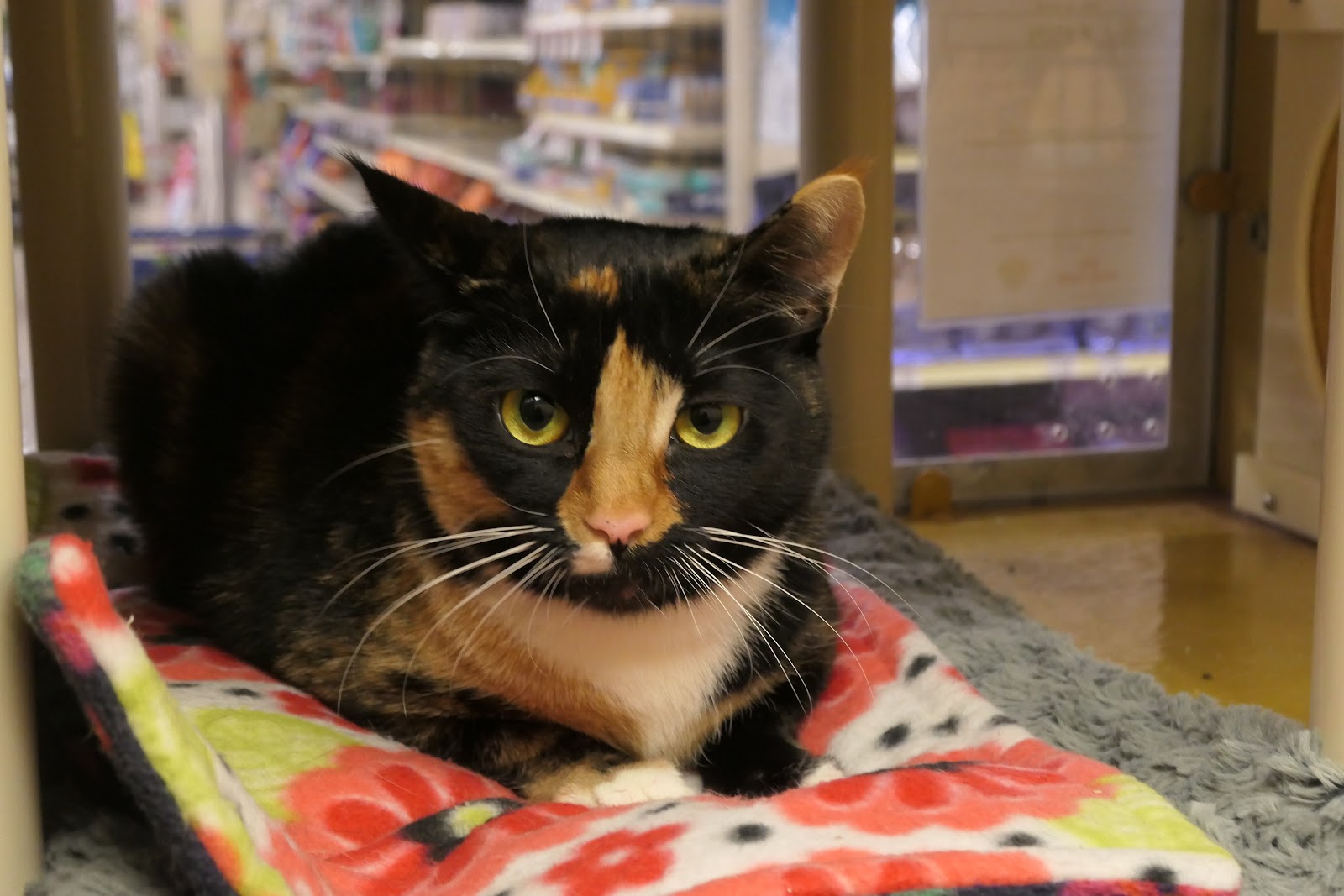 [above: photo of Buffy]
Another busy week in the cat room means a lot of turnover among the cats.
Mr. MARKLEY is still with us, and very much I think the room’s dominate personality. He went out on his usual walk and got a lot of attention (of the ‘if only I had room for another cat’ kind). Learned the important lesson that when he flops over belly-up he’s not asking for a belly rub but is just enjoying the cool feel of the tiles.  He ranged all over the store but had bad luck; it seemed wherever he went there was a dog there. Nice to see he's popular with the PetsMart staff.
Next out was dark calico BUFFY. Apparently recently a mama cat but her kittens are elsewhere. Only about a year old herself. Shy at first, she warmed up quickly, demonstrating her loud purr. When taken from her cage revealed herself to be a tree cat, moving around in the higher levels of the cat-tree. Very affectionate and very forceful about pushing her head against you to be petted. At one point climbed up on my lap. Eventually relaxed a little and even went exploring around the back part of the room. Cried at the end of my shift, unhappy to have to go back inside.
The new bonded pair of ex-kittens (only about a year look but look like adult cats not kittens) were REMI and MIKE (black and grey, respectively). Remi is the braver of the two and came out for a while; Mike kept thinking about coming out but not doing it. When I went to help his dithering at once turned into a determination not to leave his cage. Remi is something of a talker, though not in Mr. Markley’s league.
Of the five kitten last week two are still with us: dark calico BISKIE and little yellow LOAF. They clearly felt they had to wait too long for their turn but thoroughly enjoyed being out. It was fun to watch them playing sometimes separately, sometimes together. It was not till the end of shift that I noticed the little spot of orange at the tip of  BIskie's tail. They too were unhappy to go back into cages and joined in the chorus.
Happy to say the cats were much admired, with lots of folks ooh-ing and ahh-ing and taking their pictures. Hope their turns at adoption come soon, esp. Mr. Markley.
Health concerns: none that I noticed.
—JR

--Only the next day, and already three of the six cats have gone to their new homes: MR.MARKLEY, little BISKIE, and little LOAF. I'll miss our walks together, but I'm especially pleased that twelve year old Markley will have a place of his own.  --JDR

Posted by John D. Rateliff at 7:01 PM No comments: 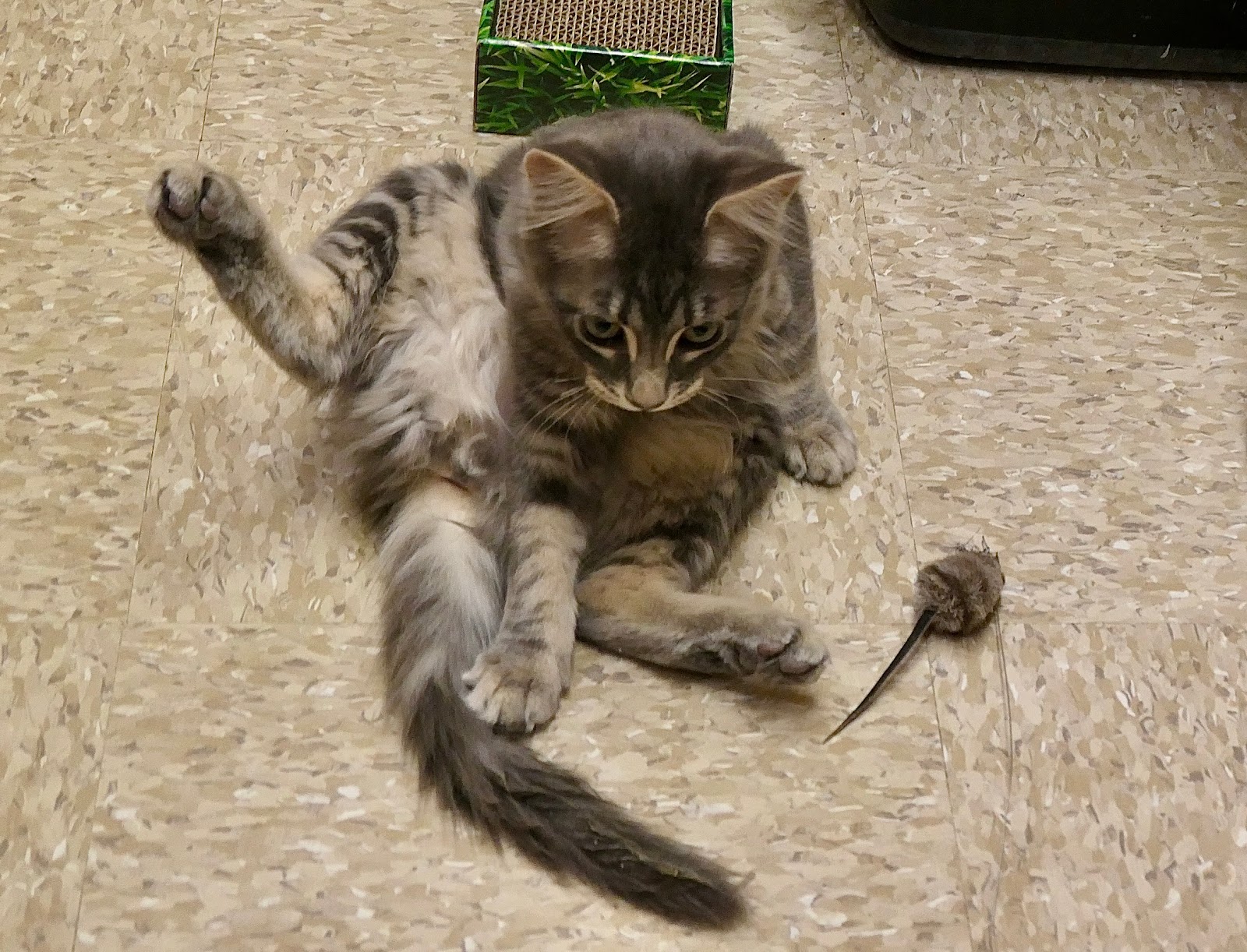 (So, I'm late in getting these notes posted but thought that since I did have them written up I might as well share.--JDR 2/11-22)
Today’s shift started with renewing my acquaintance with last week’s two new cats, MARKLEY and SMOKEY (the third, COLUMBUS ELLIE, having been adopted already), then meeting BONNIE (the new mother cat) and her five kittens: fluffy grey PEARL, sleeker grey SHADOW, yellow cat MR. LOAF, yellow-orange SQUIRRIL FLIGHT, and piebald BRISBY, the sole sister among them and, according to the behavior log in the cat room,  The Boss of this batch.
Once again Mr. Markley enjoyed a good long walk (about forty minutes), showing that he’s a smart cat (he’s now got down the lay-out of the entire store) as well as really sociable. Be wary, though: he’s found the location of the front door and needs to be watched carefully when up near the registers and all. His reaction to seeing a (small, quiet) dog was to give what I can only call a derisive mew. He got lots of attention and some petting, including over at Banfield, which he enjoyed.
Smokey was shyer this week than last (I suspect the abundance of kittens had something to do with that). Last week I was able to get her to settle down beside me on the bench for a nice quiet low-key petting session; this time she only stayed with me for a few minutes before heading back to her cage.  Last week I noticed that her ears need cleaning to get some of that black gunk out but didn’t make much progress, then forgot to follow up today.
That meant it was time to Let The Kittens Out. I extracted Bonnie from her cage with friendly persuasion but to no avail; before long she’d made a beeline back to her safe spot. She gladly accepted being petted while in there but no interest at all in coming out. Pity. She more of less ignored the kittens.  Did find out that she loves the gopher game.
The second  hour or so was Kitten Time. I lifted them out one at a time, whereupon they joined the Great Kitten Game of finding everything that could be a toy and making it one. They didn’t mind if I joined in their kitten games but they really didn't need any help. It was great fun to watch.  At times all five would be focused on the same toy. Interesting to see the different personalities. One of the grey ones (Pearl) likes to drag the toy off away from the others, while one of the yellow cats (Squirrel I think) would lie in wait for it, pouncing from cover when it got near.
Health Issues. The kittens consider an empty dirt box a challenge. Each time I scooped another came running to use the newly cleaned box. Proof that digestions were working well. Only thing to look out for I noticed was some vomit or feces on the little flat scratching post in with the kittens. Someone threw up while I was there (has to have been one of the kittens) having somehow gotten hold of a hair-tie that he or she had swallowed. Luckily looks like no harm done.
Now it’s time for visitors to show up, admire such appealing cats (especially Markley), and see if there’s a cat-sized hole in their homes.
—John R.

Posted by John D. Rateliff at 8:28 PM No comments:

Quote of the Day: Jonathan Howard

From "Johannes Cabal and the Blustery Day" by Jonathan L. Howard

Johannes Cabal and the Blustery Day

It never got that moment. A cheap plaster bust of Napoleon Bonaparte followed it down from the attic landing, fell the three stories accelerating all the way and

dashed the failure into failure pate upon the instant of impact.

Johannes Cabal -- a necromancer of some little infamy -- leaned over the bannister railing from which he'd dropped the bust and examined the effect of cheap statuary on reanimated flesh. It told him nothing new; he expected to commit this messy act of euthanasia every few months and the splash it made always looked very much the same. At the end of the landing was his remaining supply of ammunition, another five Napoleons. He would have to lay in some more if his current line of experimentation continued to be so disappointing.