What is This, and Why do I have it?

So, I was doing some more sorting yesterday when I came across the following: 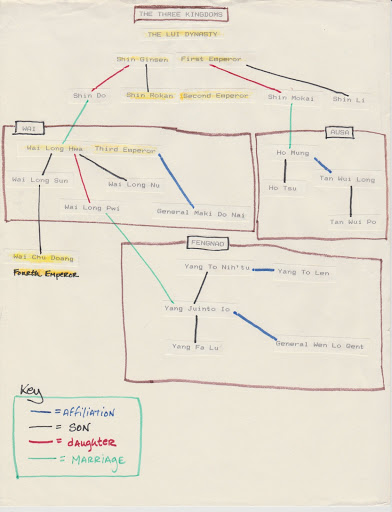 I have no memory of ever having seen this before. It was in a box with a lot of miscellaneous papers, mostly (but not all) associated with the initial d20 boom. Anyone want to claim it, before it goes into that great big sorting box in the sky?

Finished but not Done

So, unfortunately I was right that just because I'd reached the end of a piece, it didn't mean I was done working on it. In this case, the problem came when I did a practice reading of my essay and found that it took me twenty-four minutes to read aloud. That's a problem, given that each of us on the panel at Kalamazoo has about fifteen minutes.

So I've been trimming, trying to excise sections yet keep the argument as a whole coherent (and, hopefully, persuasive).  Fortunately  a practice reading of the Short Version today came out at sixteen minutes. That's much better. Some more polishing of the new transitions and another practice reading between now and then and we shd be good to go.

Oh, and I've changed the title of my piece, from "Valinor in America" to "The Lost Road as Faerian Drama".

Tarkus's contribution to all this is to prove the old adage that nothing makes a cat want to be in a room than a closed door keeping him out. Or then closing it to keep him in. Or not leaving it open after letting him out again.

current reading: the latest Murderbot book by Martha Wells (good so far but not  as engaging or gripping as most in the series). After I'm done with it (shdn't take long) I plan to go back to Carpenter's book on The Lost Generation.

Posted by John D. Rateliff at 1:01 PM No comments:

So, thanks to A. and D. for sending me to the link where I cd watch Verlyn's talk to the Tolkien Society on the 10th.

It's basically a look at Tolkien's use of negative space in his mythology. Taking Becket's WAITING FOR GODOT as her touchstone, with its characters on stage constantly awaiting the arrival of of someone who never shows up, Verlyn suggests the lack of The Tale of Earendel may be intended. A real mythology needs gaps, lost material, and Tolkien's failure to provide any full text of Earendel's story looks to her as deliberate, particularly (she notes) because Tolkien put in a number of references that shd lead up to the tale but stop short just where the Tale (or Lay) shd start.

I don't think I agree, at least not without going away and mulling over the argument for a good while.* As so often with Verlyn, who asks the difficult questions, it's thought-provoking and very well written. I conclude that we're going to need a third volume of her collected Tolkienian essays, to go with GREEN SUNS and ALWAYS BE A FAIRY TALE, somewhere down the line.

*I think it's more a matter of ambition on Tolkien's part: he had the habit where he'd no sooner start a Tale than he'd stop and re-plot it as part of some vastly expanded schema (cf. The Lay of Earendel, THE LOST ROAD, &c), after which the original tale in-progress tended to languish.

Happiness Is a full draft (and a Found Reference)

So, I've now finished the draft of my Kalamazoo piece. It's due to be delivered on the 14th, so I have the better part of four weeks to polish and practice it.

Plus I wanted to read one of Verlyn's essays that pertains to the same topic. Her piece came out before I'd come up the idea for mine, but was published after. So I held off reading it until I'd finished my own, since I didn't want my piece to be in reaction to hers. Now that I'm reading it I'm glad to find (a) that it's v. good, as expected, and (b) it takes a significantly different tack than I do. So it shd be fine if I just insert a note in the proper place noting (and recommending) her essay.

Speaking of notes, I have one substantial and substantive one I need to add to address a point Janice came up with during one of the many times she let me run parts of the essay by her.

As for 'found reference', I realized as I was wrapping up the piece that I was going to have to search through some twenty pages of Tolkien's late tangled metaphysical writing to try to find a specific point he made, probably somewhere in 'Laws and Customs among the Eldar'. And opening my copy of HME.X I found the passage I was looking for in some ten minutes. And I'd not only remembered the passage correctly, so that it actually made the point I wanted to make, but I'd made a mark next to it in the book way back on 7/16-05 to draw my attention to the passage when I needed it. I'd like to say this is good timing -- it's really serendipity --but whatever it is, it's welcome.

And tomorrow it's back to revision.

current reading: APPENDIX N resumed, midway through the Moorcock (which I disliked) and then on through the Lovecraft (in his Dunsanyist mode, but not v. successfully).

Tomorrow will probably be, of all things, Hemingway's poetry.

Posted by John D. Rateliff at 9:48 PM No comments:

Who Is 'the self-styled Ruler of Middle-earth'?

So, re-reading the Foreword to THE LORD OF THE RINGS last night I was struck by a familiar passage I realized I haven't fully thought through before. After pointing out that his book is not a roman-a-clef allegory of wartime politics of the World War II era, Tolkien gives an alternative summary of how things wd have gone in his book had that been the case:

The real war does not resemble the legendary war

in its process or its conclusion. If it had inspired or

directed the development of the legend, then certainly

the Ring would have been seized and used against

Sauron; he would not have been annihilated but

enslaved,* and Barad-dur would not have been

destroyed but occupied.  Saruman, failing to get

possession of the Ring, would in the confusion

and treacheries of the time have found in Mordor

the missing links in his own researches into

Ring-lore, and before long would have made

a Great Ring of his own with which to challenge

the self-styled Ruler of Middle-earth.  In that conflict

both sides would have held hobbits in hatred

and contempt: they would not long have survived

Although Tolkien does not name this 'self-styled Ruler of Middle-earth', he offers some clues as to who he, or she, might be.

First, we know that it's not Sauron, who has been defeated and imprisoned.

Second, we know it's not Saruman, since he's acting in opposition to the Ruler as his or her rival.

I therefore come up with a list of seven candidates:***

Of these, I think Boromir and Denethor are the likeliest: the ones most in favor of using the Enemy's weapons against him. Plus of course Boromir actually attempts to steal the Ring, and Denethor makes it quite clear that he wd have used the Ring had it been in his possession.
On the other hand, that not even Isildur cd master it cd be used to build an argument that sufficient stature requires the new owner of the Ring to have been Maiar, not Mortal. If so, the list of candidates shrinks to just three: Gandalf, Elrond, and Galadriel -- all of whom are already Ringbearers of the Three Elven Rings.
Set against this is the fact that Sauron seems to most fear Aragorn, once he learns of his existence, and you'd think the Dark Lord wd know better than anyone else who posed the greatest threat to him in terms of pure power politics.
So, though I cd make a case for any of these seven, Denethor gets my vote of likeliest to turn into the next Sauron, with Boromir close behind.

*This of course wd have been repeating Ar-Pharazon's mistake

**or it wd just wind up (briefly) in the possession of another Gollum.

***I exclude Bombadil from this list, for reasons I assume will be obvious

So, occasionally I like to check out The Dodo, a website largely devoted to stories of people finding and rescuing animals (esp abandoned kittens). Occasionally they do stories about someone helping a wild animal. But I hadn't seen a segment on rescuing a bumble bee before. Here's the piece:

And just because it's good from time to time to revisit the classics, here's the saga of Potato Cat

current viewing: HEMINGWAY by Ken Burns (up to 1929). One-third of the way through, and I'm baffled why they didn't do this on The Lost Generation (Pound, Joyce, Fitzgerald) rather than just Hemingway. Might dig out and skim Carpenter's GENIUSES TOGETHER, his book on postwar Americans in Paris.

Posted by John D. Rateliff at 9:22 PM No comments:

So, this year's Tolkien Society awards  for excellence in Tolkien Scholarship have just been announced:

Congratulations to all the winners, and the nominees as well. Here's the link.

--current reading: "Plato's Atlantis and the Post-Platonic Tradition in Tolkien's Downfall of Numenor" by Michael Kleu

So, today I finally managed to get the Covid vaccination. We were lucky and both got the one-shot Johnson & Johnson, and didn't even have to go more than about two miles away to reach the site.

Here's hoping others who have been waiting will soon share in our luck.

Ironically, today turns out to be exactly one year from when we wd have left for our big one-in-a-lifetime trip to see the pyramids and the sphinx, had the world not turned upside down.  I may go back in and rewatch some of the walking tours I dug out at the time we were planning our itinerary.

--currently watching: The Russian FELLOWSHIP OF THE RING

Posted by John D. Rateliff at 5:47 PM No comments:

So, two new books -- both of them on Tolkien -- have arrived within the last two weeks.

The first is TOLKIEN & THE CLASSICAL WORLD, edited by Hamish Williams, a substantial volume of four hundred pages. This addresses a topic you'd have thought wd have received a lot of attention before, but oddly has been the subject of just the occasional essay, like Reckford's piece from 1987 on Bilbo and Odysseus. The only previous book I know of on the topic is Morse's slim little volume (circa 1986), which is more a pamphlet than a full size book.  I'm particularly looking forward to the pieces on Atlantis, the Ring of Gyges, and Rohan.

The second is THE SCIENCE OF MIDDLE-EARTH, edited by Roland Lehoucq, Loic Mangin, & Jean-Sebastien Steyer. Oddly enough, the title page doesn't list the authors of the individual essays; you have to turn to the first page of each essay for that. There's been a book on this topic before (Henry Gee's eminently readable 2004 book, also called THE SCIENCE OF MIDDLE-EARTH) but even a quick glance shows there's much more to say. Another slightly unusual feature of this book is that its contributors seem to mostly have a French background, as opposed the the US/UK background of most writers of books on Tolkien.

Two other non-Tolkienian titles I'm reading as ebooks are a biography of Kipling (who turns out to be a deeply unsympathetic figure) and a light novel series.

Soon there will be the latest in the Murderbot series. In the meantime, Clarke's PIRANESI is waiting in the wings.

So many good, or potentially good, books waiting . . .

Posted by John D. Rateliff at 5:45 PM No comments: