So, I'm currently in one of my favorite places, visiting our friend Bijee at the Strange High House near Trout Lake, atop the little gorge of the White Salmon River, about midway between Mt. Adams and the Columbia River Gorge. 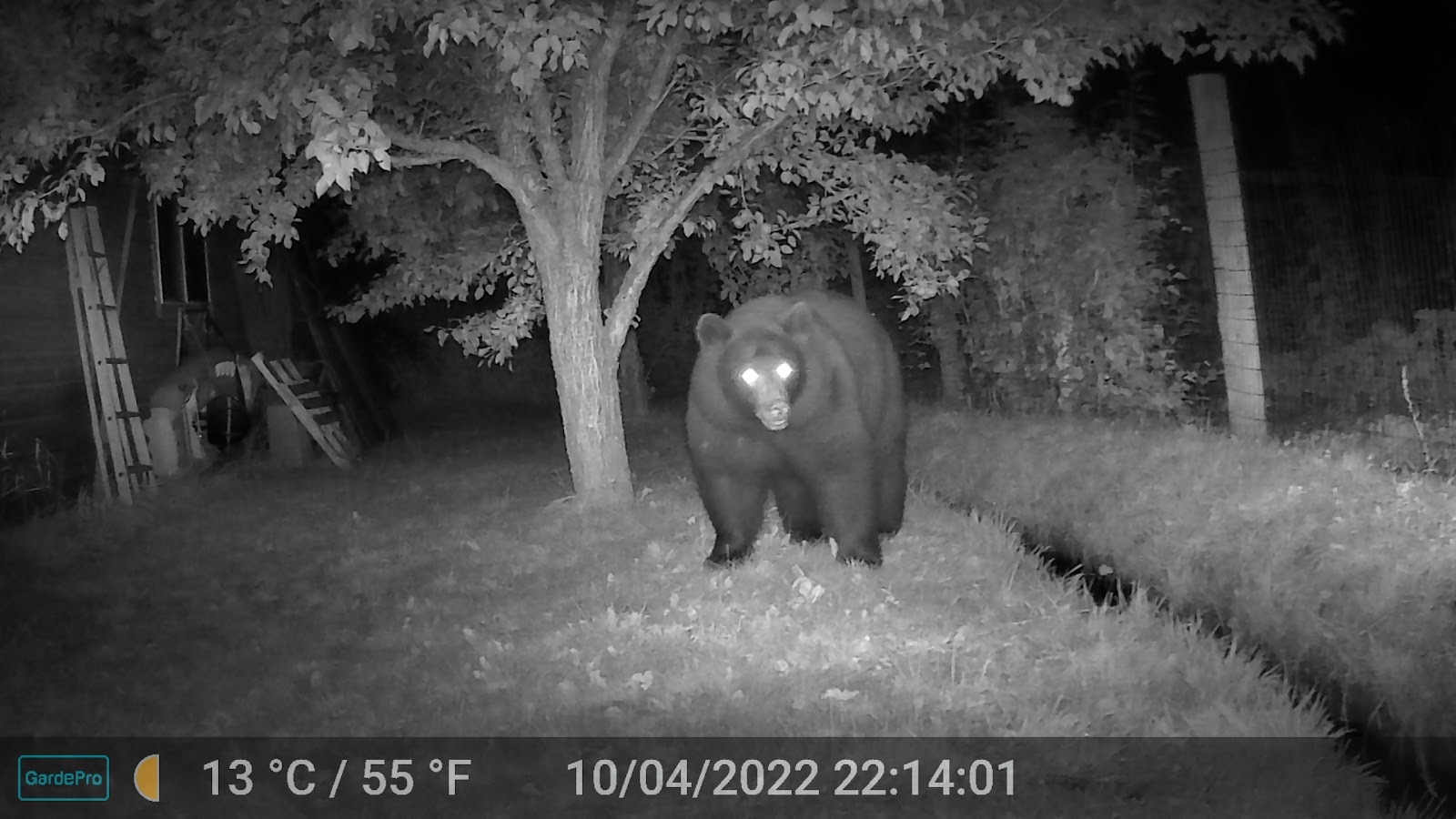 The big excitement this year has been the recent sighting of a bear who has raided the little orchard besides the house. I'm rooting for the bear (whom Bijee has nicknamed Gunther), as in hoping it vanishes back into the wilderness that surrounds us, in which it must have been resident all its years, before the local bear-hunters organize a pursuit.

As if a wandering bear with a taste for pears were not enough, I only found out this trip that Mt. Adams is considered  a hotbed of alien activity by those who go into such things:

The ECETI Ranch (which stands for Enlightened Contact with ExtraTerrestrial Intelligence) and the Self-Mastery Earth Institute apparently attract people from all over. Their medicine wheel looks interesting but I admit I have no idea what a Pleiadian Circle is or what it supposedly does.

For those interested in seeing how to monetize UFOs, connected with the site there's Liongate, whose icon is a surprisingly Narnian lion (https://www.eceti.org) and an array of offerings.

Within the last year or two there's even been a movie based on the Aliens-inside Mt. Adam trope --though not having seen this yet I'm not quite certain whether it's more mockumentory or sci-fi/horror fare.

--More on this one when I've had a chance to see (or at least skim) it.

--And now back to on-vacation relaxing.

Posted by John D. Rateliff at 2:20 PM No comments:

So, today the supplement to TOLKIEN STUDIES volume XIX arrived -- in rather battered condition, I'm sorry to say: the cover looks like it's been crumpled then flattened out again. Anyone else have this problem?

Glad to say the book is intact; in this case, condition does not affect contents.

And the content is impressive, and shd be welcome to all serious fans of the book. It's long been known that when the narrative of THE LORD OF THE RINGS split into multiple threads, Tolkien drew up charts so he cd keep track of who was doing what an when. Wm Cloud Hicklin has now edited these columns as THE CHRONOLOGY OF THE LORD OF THE RINGS, and it is being released as a stand-alone addendum to the latest volume of TS (XIX).

I haven't had a chance yet to look over this, but I'm impressed by the clarity of his presentation. I made several stabs towards transcribing this material for my own research in the early 2000s and cdn't arrive at a satisfactory way of transcription among the multiple, oft-altered material. It's good to see Hicklin succeed.

And it's always a good day in my book when we get some new, never-before-published Tolkien mss.

Speaking of which, my copy of Volume XIX itself has not yet arrived. Anyone else having this problem, or am I just impatient?

People Say Nice Things About Me

So, I've been looking at the catalogue for the currently ongoing Marquette Tolkien exhibition, I was very pleased to see the following description of my contribution to the reprocessing process, in Wm M Fliss's essay "A Journey Down the Great River of Wilderland: Mapping the Manuscripts for The Lord of the Rings".

The complete collection was digitally photographed in 2016; and a herculean effort commenced to map the drafts and isolated fragments, establishing connections between these manuscript pieces, in terms of both their emergence during the long gestation of The Lord of the Rings and their place within the evolution of individual chapters. The Tolkien scholar and Marquette alumnus John Rateliff has been instrumental in this maping process. Once upon a time, John worked with Taum Santoski to assist Christopher Tolkien in understanding Marquette's manuscripts so that Christopher could write The History of Middle-earth. John, aided by his own long history with the manuscripts as well as by access to the rich body of notes and correspondence between Christopher and Taum, has performed the yeoman's work of fitting these pieces together, work that will be continuously fine-tuned in coming years as other scholars interact with the digital system.   (page 28)

Earlier in the same piece (page 27) appears an image of what the schematic map looks like; a description of its function appears on a few pages later:

The mapping process has identified the various drafts for each chapter and a timeline of their approximate creation. Once all the metadata is inserted into the system, researchers will be able to move from page to page within a draft, from draft to draft, and from chapter to chapter across the entire history of Tolkien's masterpiece. (page 30)

It's a good feeling to see the result of years of work (about six years by my estimation) be so favorably described.

My ego is well and truly boo'd.

Posted by John D. Rateliff at 8:50 PM No comments:

As an adaptation of Tolkien: Appalling.

As a fantasy film, difficult for me to judge. In any case the final episode was by far the best.

Best characters: Adar and Celebrimbor. They're straightforward about what they want and move towards their goal without undue angst.

Special Penalty: to Galadriel, from  the librarians and cryptkeepers of Eregion.

Posted by John D. Rateliff at 7:15 PM No comments:

Quote of the Day: Annwn

The river was broad and shallow at that place, and singing over innumerable stones; and with many alders on either bank, and great oak-trees beyond the alders, The road ran down through the river between the trees; the sunlight dappled the shallow water there, gleaming down on it  through the leafage.  The two arnies wee on the plain facing each other, one on this side of the river, one on that.

Laconic Review of THE RINGS OF POWER Episode 7

All kinds of darkness.

Enter the Norns (wait, what?).

bonus: Celeborn the Wise as a silver crab.

Posted by John D. Rateliff at 4:21 PM No comments:

So, we got together Sunday for one of our rare meetings of Mithlond, the former Seattle area fantasy book discussion group. The weather being nice, we sat outside and enjoyed seeing what they'd done with their back yard and also got a quick tour of the Tiny House they'd built there ---the first time I'd seen one of these. Don't know how they do it, but they managed to make it look bigger on the inside.

Amid our sipping tea while discussing books and films and plays and a myriad of other things, we got into  a desultory discussion of various birds that came up to their yard, including whether the woodpecker they said they occasionally see was a flicker or a pileated woodpecker. Not long after I made a good case that it was probably a flicker, a pileated woodpecker flew in, circled the yard, and flew off again.

This marks the first tine I've ever seen a real, live pileated woodpecker.* I've seen a dead one in a parking lot (alas), and I've looked the wrong direction when people I'm with have seen one, including one time back in my Scouting days, when I used to go out on pre-dawn birding with Mr. Stirling Lacy and Dr. Charles Rogers, both of whom I knew from the church.  So I can tell a scissor-tailed flycatcher from a shrike, but birdwatching makes no promises. You just put yourself at a likely spot at a likely time and hope for the best.

Which is why most of my birdwatching these days is v. low-key: watching the hummingbird wars off the balcony, admiring the chickadees and goldfinches and juncos and sometimes a pair of flickers,** keeping an eye out for everything from red wing blackbirds to great blue herons and once in a long while a bald eagle (a pair nests just a mile or so from our townhouse).  And of course I used to feed the crows when I went out but I've scaled back on that a lot in recent years.

Might be a good time to dig out that copy of THE GRAIL BIRD which I bought several years ago but have never read.

*It looks just like an ivory-billed woodpecker, except for the color of its bill and not being extinct.

**They've been coming up for as long as we've lived here, so it must be a long line of descendents.

Posted by John D. Rateliff at 6:28 PM No comments:

So, yesterday I spent hours looking through the third volume of CSL's COLLECTER ESSAYS. And, as has often proved the case,  I didn't find what I was looking for but came across a number of interesting things in the search. For example, I'm not quite sure how to take the following passage from a 1959 letter to the great Arthurian scholar Eugene Vinaver.  (III.1083-1084)

Have you read Tolkien's lecture on Fairy Stories in the volume Essays presented to Charles Williams?  Part of my case against the Celticists wd. be his mixim that 'motifs are a product of analysis' -- not bricks out of which stories are put together but entia rationis ['mental fiction'] into which we analyse them -- rather like the metrical feet or grammatical conjunctions and declensions.

I thought I knew ON FAIRY STORIES pretty well, but this 'maxim' doesn't ring a bell. Could this be an example of what JRRT called 'Lewisification'?**

*Hooper's note explains that by Celticist Lewis meant figures like Loomis who explained everything in Arthurian legend as derived from Celtic soures.

**For Tolkien's description of being 'Lewisified', see  LETTERS p.89.

Posted by John D. Rateliff at 5:56 PM No comments:

Quote of the Day

It would be an ill thing

if wonders were for the seeing

and we without the seeing them

"The Story of Pwyll and Rhianon"

A More Laconic Review of Rings of Power episode 6