So, in the mini-essay on wargs (wolves) in MR. BAGGINS, part one of THE HISTORY OF THE HOBBIT (2007), I did a little mythbusting:

"Wolves do not, of course, eat people. But legend and folk-belief has maintained otherwise from time immemorial, from Aesop's fable of 'The Boy Who Cried Wolf' [sixth century BC] through fairy-stories like 'Little Red Riding Hood' [seventeenth century French] and 'Peter & the Wolf' to the modern day (Saki's 'Esme' and 'The Intruders', Willa Cather's My Antonia , Bram Stoker's Dracula, and any number of Jack London stories). Perhaps the most famous literary account of a wolf-attack prior to Tolkien's occurs in Defoe's Robinson Crusoe [1719] . . ."       page 216

". . . unlike wolves and eagles, bears really DO eat people -- a fact of which Shakespeare was well aware, hence his famous stage direction for one doomed character: 'Exit, pursued by a bear' (A Winter's Tale, Act III scene iii), followed by a gruesome off=stage mauling as the character is torn limb from limb. The largest land predators, bears maul people every year even today."   page 256

I have recently heard that I may well be in error. According to French Tolkien linguist Damien Bador, and quoted from a recent email with his permission:

There is one point where I need to mention that I believe you’re clearly mistaken. On several occasions, you take pains to stress that wolves only attack people in fairy tales, not in reality. As far as I’m aware, this is quite true for the American wolf, but not so much for the European (and Asian) one. Wolf attacks have been rather well documented in Western Europe since the XVIIth century at least and up to the early XXth century (in fact, France is probably the country with the best historical records, stretching from the 1300s up to 1920 and involving nearly 7600 fatal attacks, according to Wikipedia). In a large number of cases, this was linked to the wolf being rabid (which entirely removes its fear of humans), but there were also a large number of non-rabid wolf attacks recorded. Most victims were isolated children and women, especially during the summer, when people encroached upon the wolves’ territories during their pastoral or agricultural activities. What is probably the most well-known series of attacks involved the “Beast of Gévaudan” in mountains in Central France, which involved roughly a hundred fatal attacks from June 1764 to June 1767. While they might have been caused by several animals, most specialists still consider they were performed by wolves, or possibly wolf-dog hybrids (see the very detailed WP page in French on this topic: https://fr.wikipedia.org/wiki/B%C3%AAte_du_G%C3%A9vaudan).

So, it seems that I may have overstated the case.

Unless Americans are just less tasty than Europeans.

Thanks to Damien for the corrective.

My Favorite Writers Who Aren't Tolkien

So, last week David Bratman had an interesting post on his blog:

The two questions being asked are

(1) who is your second-favorite fantasy writer after Tolkien? *

(2) who are your two or three favorites among fantasy writers who came after Tolkien ( post-LotR)?

My answer to Question Number One is LORD DUNSANY, without a doubt.

My answers to Question Number Two wd be THE FACE IN THE FROST by John Bellairs, WATERSHIP DOWN by Richard Adams, and I think THE BRIDGE OF BIRDS by Barry Hughart.

If you'd pick a different author or book, feel free to share in the comments

*this assumes your next-favorite is fantasy, which is not necess. the case. It also assumes Tolkien is yr favorite, which again may not be the case.

So, I wdn't have guessed that the latest bone of contention to play a part in the slow-motion war in Israel-Palestine would be . . . ice cream?

Posted by John D. Rateliff at 9:52 PM No comments:

So, last week I gave away eleven hats, eight of them brown c-crown fedoras, the other three straw hats (two being fedora-style, the third a wide-brim 'plantation hat*'). I've worn hats for as long as I can remember, and my hat of choice has long been the fedora. I remember being glad when the Indiana Jones movies came out, because they made it easier to find the kind of hat I like (though his are wider of brim than my preferred style). The reason I had so many is that when a hat wears out I retire it and get a new one. Over the years I had built up a considerable stack of old hats atop a row of bookcases down in the boxroom; hats I no longer wear but cdn't bring myself to get rid of.  Janice had suggested donating them to one of the area's theatrical troups for use as props in plays, but then the pandemic hit, complicating everything. In the end, a friend volunteered to take them for use as props in a party game for an end-of-fiscal-year organization. I hope they contribute to an enjoyable event.

It has been interesting just looking over these old hats. The boxes that each hat was stored in bear witness, from the names on the sides, to the sad fact that like a favorite restaurant, a hat shop is not a permanent thing. I had a hat from Donge in Milwaukee's on Old World Third street,** hats from Sacred Feather on State Street in Madison. And I had quite a few hats from Bernie Utze, my favorite of them all, here in Seattle downtown near the Pike Place Market.

When the last of these went out of business a few years ago I planned ahead and bought three hats, which I thought shd last me a long long time: a hat I wear as my daily hat, a hat to wear when it's raining, and a back-up pristine hat I put aside to take the place of my everyday hat when it wore out somewhere down the line. Beyond that it seems likely that any future hats will probably be selected on-line --not a preferred method but hopefully workable.

Even though I gave away eleven hats, all in one fell swoop, I'm not exactly bereft of hats. In addition to the three Bernie Utz hats described above,  there's my fedora-style straw hat, which is getting a lot of use in this hot, dry summer. There's the straw hat I bought in Hawaii when we visited the rainy part of the Big Island, which endured trips to a volcano, a mountain top, and turtle beaches; one of my most durable hats. There's the handmade crafted hat bought on impulse during a visit to Trout Lake, which looks more like a Shire Hobbit hat and which we haven't actually worn in the year or so since we got them. And finally there's the old brown fedora, one of my all-time favorites, which during all this recent sorting out I decided I'd retired too soon and brought back into service. So that's seven hats I'm keeping.***

Janice, by the way, prefers collapsable hats: easy to carry and put on if the weather changes.

*a great hat, but not a style I can really pull off.

**where I had the worst shopping experience of my life, after which I quit going there. Janice, who witnessed it as a kind of innocent bystander, said it was funny.

***there's also the Fez, but it's more a roleplaying game prop than a hat I'd actually wear outside, where people might see me.

Posted by John D. Rateliff at 5:43 PM No comments:

So, I was pleased to hear that Andy Serkis, Smeagol extraordinaire, has recorded an unabridged audiobook of THE LORD OF THE RINGS in three parts (FR, TT, RK), due out September 16th. This is welcome news in that the old Rob Inglis recordings have been long overdue for replacement and also that I expect Serkis to do a bang-up job of it. Here's a sample Smeagol vs. Gollum track:

I hadn't realized until checking some links in connection with this story that Serkis has already released a complete recording of THE HOBBIT almost a year ago. Clearly it's time to update my JRRT audiobooks, my current holdings being a melange of cassettes, cds, audiofiles, and records. I also see there's now an audiobook of UNFINISHED TALES which I hadn't known about. So there's some new to discover and much older material to renew my acquaintance with. More later.

--current reading: THE THIRD INKLING (up to 1936, when Williams and Lewis made contact)

So, thanks to JC for the link to news about a petition asking Amazon Studios not to give their forthcoming Tolkien series the Game of Thrones treatment, with intimacy counselors and the like.

What's more interesting is that the journalist who wrote this piece, Collin Garbaring, clearly put some time in, down to researching the correct titles of papers from the recent Tolkien Society's seminar, and even seems to have watched some of the audience chat and Q&A from that event. He knows who Shippey is, and his significance, and located a credible Inklings scholar (Louis Markos) for a relevant quote.

For the curious, here's what seems to be the original petition, or two versions thereof, or perhaps two similar petitions, with widely divergent numbers given for sign-ees: 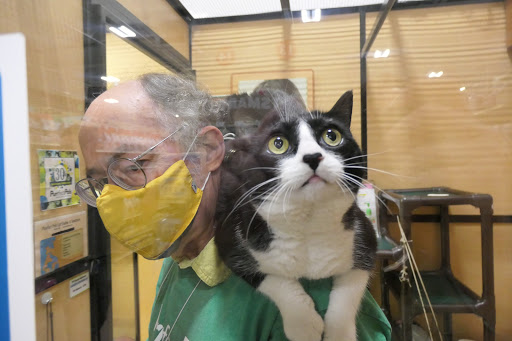 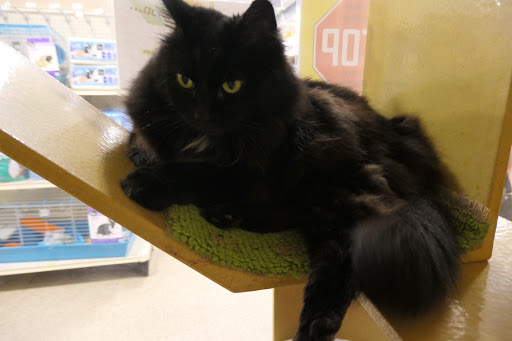 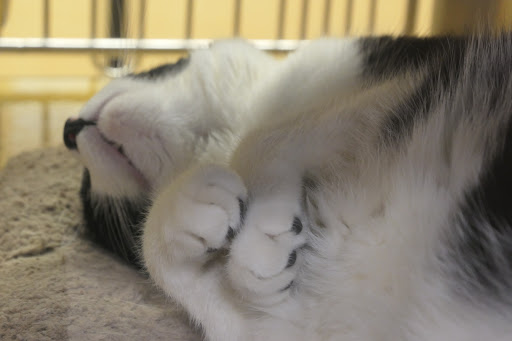 So, all four cats who were in the cat-room (Sophia, Sunshine, Tiffany, and Marley) got adopted, switching out our yellow cats and torbie/calicos with black and grey: tuxedo cat TEE, black cat bonded pair TABITHA and TOMMY, and grey cat pair JEREMIAH BULFROG* and JESSE.

TEE is an amazingly friendly and sociable cat. Within five minutes of my meeting her for the first time she was outside on the leash taking a walk. She did well, too, exploring the side of the store centered on the cat room without trying to make any sudden breaks. She liked climbing up on my shoulders, so that sometimes it looked like she was the one walking me. Without wanting strangers to pet her she nonetheless attracted a lot of attention while getting a chance to get out of the cat room for a while. Back in the room she wanted more attention and petting and games (the feather duster was a particular favorite) and went back in her cage reluctantly.

It was TABITHA and TOMMY’s turn next. He elected to stay in the big cage but came up to the front and welcomed being petted so long as he didn’t have to leave his safe space. He basically cuddled in the cage. His sister Tabitha (the fluffy one) by contrast came out gladly and stayed out. She loved games, esp the string game, but loved being petted even more. She too was displeased to have to go back in her cage, and several times made it clear she’d like to come back out for another round.

This week’s shy cats award goes to JEREMIAH BULFROG and JESSE, neither of whom wd come out, though they purred when petted in their cage. They’re truly bonded: with four cage-sections  (the whole bottom row)  to choose from they slept cuddled together in the same section. I cdn’t tell them apart but they know their names and each will respond to being called by his or her name.

I think as the new cats get used to the cat room they’ll be out and exploring more, at first cautiously and then with more confidence. Don’t think it’ll take too long either.
No health issues that I noted.
One person who admired Tee’s walking said he’d adopted a cat from this cat-room once, named Nikky (just guessing at the spelling). I gathered Nikky is no longer among us but got distracted by the cat-walking and didn’t get any more information.
—John R.
*somebody out there besides me remembers Three Dog Night
Posted by John D. Rateliff at 5:18 PM 2 comments: