So, over the past few days I've been reading a collection of interviews with Edward Gorey— ASCENDING PECULIARITY: EDWARD GOREY ON EDWARD GOREY (2001)—in the course of which I came across a reference to Charles Williams in this somewhat unlikely place. The interview in question is a short one, one of the last in the book: a poll conducted by Amazon asking authors what recently published (1998) "book or books they most admired".

Speaking of Sylvia Waugh's Mennyms books, which I'd never heard of before, Gorey compares them to CW:

"In their strangeness they bring to mind

the fiction of such authors as say, Charles

otherwise they are unlike anything

Gorey and Williams seem an odd pairing, but then Gorey was a great fan of mystery novels, esp. English, with Agatha Christie his particular favorite. It seems likely Gorey read him for his mysteries, not his poetry or nonfiction prose.

I shd also note that "unlike anything but themselves" is a pretty good summary of Gorey himself.

*Meyerstein was what we wd today call an independent scholar, living in Oxford but not affiliated with the university, much admired by young Inkling John Wain.

So, it's strawberry season again here down in the Green River valley. For a while it was beginning to look like the long string of cool wet weather might prevent the berries from ripening -- a real problem, given that the season is typically only about five weeks long, from the beginning of June to around the Fourth of of July weekend. But the last few days they were able to open and we were quick to take advantage of our good fortune. We got a half-flat (that is, six pints), which sounds like a lot but will go quickly -- there's nothing quite as good as fresh-picked fruit (and fresh picked vegetables).

Last year the Kent farmer's market shut down completely. This year we heard it'd reopened, but when we swung by we found only one farmer amid lots of booths featuring crafts. Not that there's anything wrong with crafts, but I don't go to a farmer's market for non-farm items.  Last year we went down to the Auburn farmer's market instead, where we found our two favorites of the Yakima farmers who'd fled Kent had set up booths in Auburn instead. There's also news of a second Kent farmer's market this year up on East Hill, so we'll probably stop by there this coming weekend to see if it's more our kind of market.

In the meantime, we've already made some inroads into this week's strawberries and will probably want to restock sooner rather than later.

--current reading: this and that.

Posted by John D. Rateliff at 3:25 PM No comments: 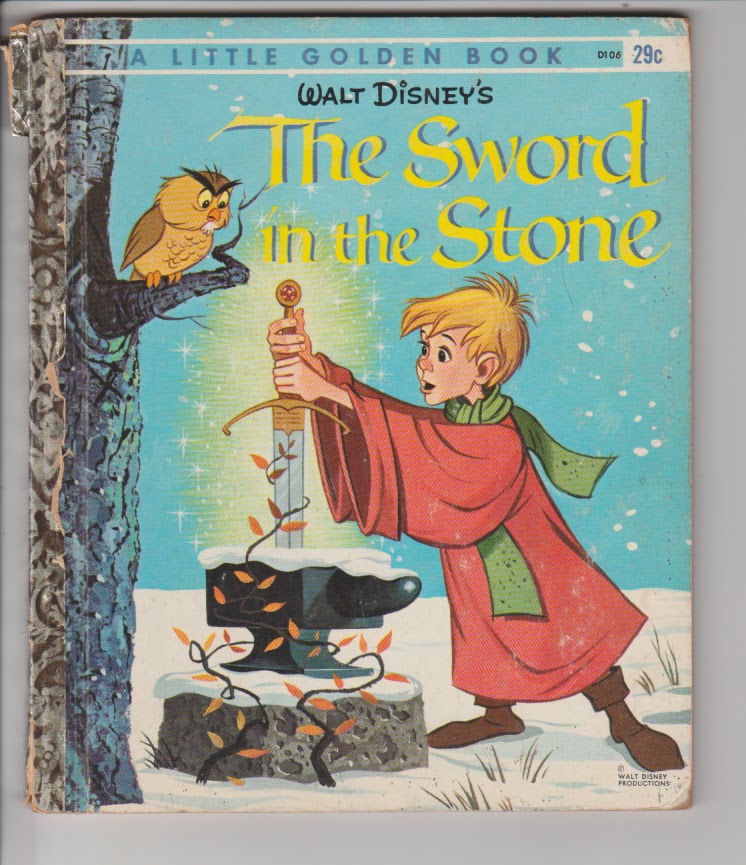 Here’s the oddest thing I’ve unearthed in a while, what must be one of the first books I ever owned. My guess is that I probably got it around the time I turned five, which also turns out to be about the time the film came out. I remember that the local supermarket in Monticello, Arkansas had a promotion where at check-out kids got a little plastic ring with a little sword in it you cd pull out and put back in and pull out and put back in and so forth. 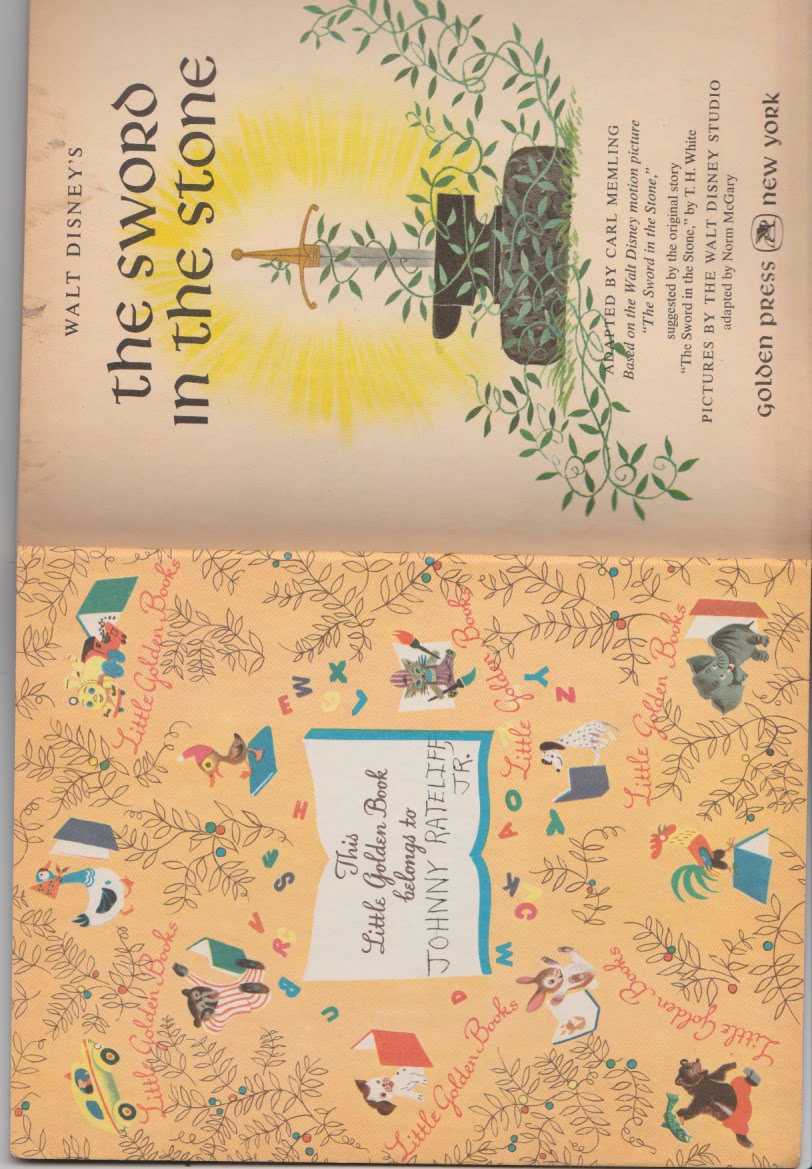 This book is signed in what is clearly my mother's handwriting (this being before I learned how to read).
The only book I think I’ve had longer is a battered copy of PICKLES THE FIRE CAT. This I loved so much that I kept the library copy checked out more or less permanently. I can still remember how every time it was due we took it down to the library, where I wd check it out again. Eventually my parents got me a copy of my own, which later passed down to my nieces and then later still back to me.  It's almost certainly my first book, but not necessarily the one I've had the longest.
--John R.
Posted by John D. Rateliff at 9:37 PM No comments:

So, last year I pre-ordered THE GREAT TALES NEVER END: ESSAYS IN MEMORY OF CHRISTOPHER TOLKIEN, edited by Richard Ovenden and Catherine McIlwaine and published by the Bodleian (which holds thousand of pages of Tolkien manuscripts edited by C. T. and then deposited in the Library). It's a book I've been v. much looking forward to but I hadn't known the exact release date. So yesterday I did the obvious thing: dropped the Bodley giftshop* a note asking the release date.

And, with admirable promptness, today I have my answer: my copy shd ship to me on June 24th, or the end of next week.  I know it'll take a while to get here, across an ocean and a continent, but it's nice to know that the release date is so near.

For those who have heard about this one but not any details, the names of the contributors shd be enough to show that this volume shd be of interest to just about anyone interested in Tolkien studies: Priscilla Tolkien, Verlyn Flieger, Wayne G. Hammond, Christina Scull, Tom Shippey, John Garth, Carl Hostetter, Stuart Lee, Brian Sibley, Vincent Ferre, and Maxime Pascal.

Having been waiting for this one for so long, I'm really looking forward to its arrival.

*For the book for Christopher, see

Note that the Bodley Shop also has an array of interesting Tolkien themed items, which can be viewed HERE: 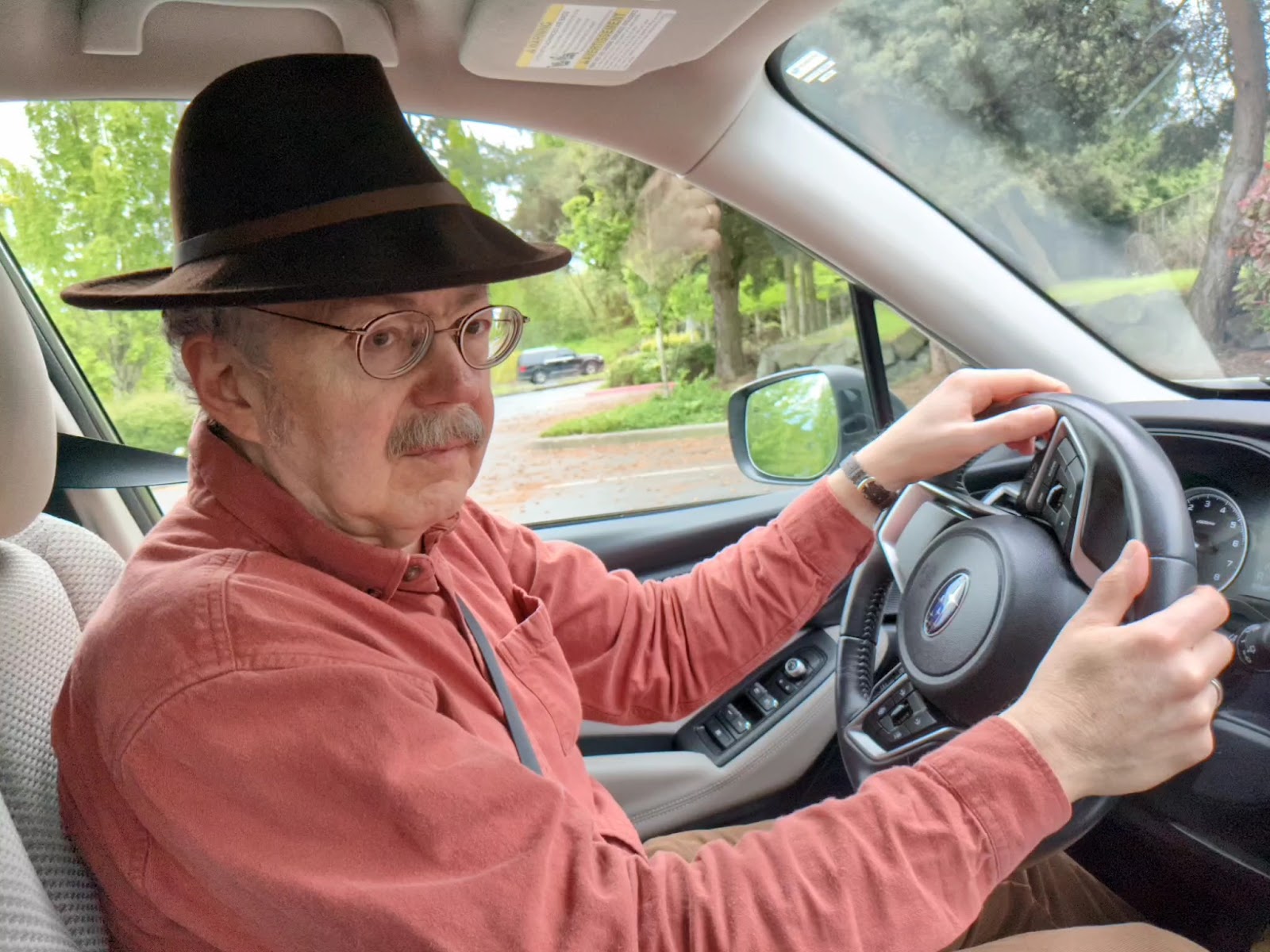 So, we bought a new car.

The old car had served us well -- we got it around the time I started this blog (its arrival being announced in one of my earliest posts herein). Being responsible car owners we've re-homed it to a new owner who shd get the good out of it.

I've given up driving, mainly because of the eyes, but Janice drove me over to a nearby park-and-ride (deserted on a Sunday) where I cd get behind the wheel and putter around a bit to get a sense of how it feels. Think this will be a good car for us for a long time to come.

As for Jasper, I was trying to think of a name. Given that it's color is a kind of metallic yellowy green I'd been inclined for Verne when Janice pointed out that this color was officially 'jasper'. So, for the time being at least, Jasper it is.

P.S. Thanks to Janice for the picture.

Lost Tales and The Lost Road

So, yesterday wrapped up the fourth and final session in Verlyn Flieger's online class

The Silmarillion: Tolkien's Unfinished Symphony, streamed through the Politics and Prose bookstore in DC.*  I'm glad I signed up, both for the presentation and discussion.

I particularly enjoyed the last session, dedicated to the Akallabeth, Lost Road, and Notion Club Papers, since I've long had a special interest in Tolkien's Atlantis myth.

Although I'd read (and written about) this material before, the presentation was thought-provoking and the contributions from the students interesting.

In short: a good course. I'd do this again.

So, thanks to Janice for the link to this story that shows just how amazingly popular, and profitable, our hobby has become.

It turns out that Wizards of the Coast, which includes Magic: The Gathering and Dungeons & Dragons, is the most profitable part of Hasbro. As in, it brought in eight hundred million ($800,000,000) last year. So much money, in fact, that it's attracting serious investors who'd like to see the ccg/rpg spun off as its own company.

This extreme profitability is all the more believable in that it might explain something that's puzzled me for years. Hasbro has a history of buying highly profitable companies, hollowing them out, and then shutting them down. It looked like they were about to do that to TSR/WotC in 2002, then they seemed to have changed plans and not followed through.  Now I wonder if that had indeed been the plan, but they'd had to call it off once they realized that D&D was, in the words of a TSR vice president back in Lake Geneva days, "a license to print money".  So much so that it's now being picked up to be used on NPR in a segment explaining proxy battles.

And we find we live in a world in which D&D and MtG sales are creeping up in a way that makes me wonder if it'll hit the billion dollar mark.

Have to keep an eye out to see if there's a follow-up piece after the actual shareholders meeting, schedules for June 8th.

So, Saturday I finished up a big project that I'd been working on off and on for some time now.

Now to write a mini-bio -- the inevitable accompaniment to any turnover -- and wait to hear back from the publisher.

In the meantime, I've started the next project, which is much more limited in scope; I expect it to run about 5,000 words and I have about three months to get the work done in. I take it as a good sign that I had no trouble finding the notes and synopsis for this one, right where I put them aside when I sketched out the piece last September.

Also good to learn that some eye trouble doesn't appear to have any major effect my ability to type or read.

More to come as the project makes its way through the printing process.

current reading: A NIGHT IN THE LONESOME OCTOBER by Roger Zelazny.

Posted by John D. Rateliff at 4:40 PM No comments: