So, thanks to Janice S. for the following link about a father who built a neighborhood park in memory of his son, an avid D&D player, complete with dragon and castle.

Thinking back on the efforts over the last decade or so to create a Gygax memorial park or statue in Lake Geneva, to no avail, I suspect the one was the result of single-minded determination and the other several different groups and individuals pulling in different directions.

In any case, if I'm ever in Carbondale, which I have to admit is unlikely, I'd certainly want to swing by for a look.

So, on Saturday I saw that the new Tolkien calendar was out, and available through Amazon. I'd realized the last time I was in Barnes & Noble (before the bad-air sequester) that their entire calendar section seems to have gone away, so I had no qualms about not 'shopping local'.* And trying to order through Amazon UK last year had been an unmitigated disaster.

And yesterday it arrived, just the third day since I ordered it. Now that's service.

As for the calendar itself, this looks to be one of the good ones. It features the work of three artists, all of whom have a long track record, dedicated fans, and a reputation for fidelity: John Howe, Alan Lee, and Ted Nasmith.** The general theme of the calendar is a celebration of UNFINISHED TALES --is it really forty years ago that this came out? It's always been a favorite of mine, and when I got the chance to have Christopher sign one of his books, this was the one I got signed.

The cover, by Nasmith, is my favorite of all the pieces in this calendar: the two Blue Wizards striding purposefully across the scene on their way east to make trouble.*** Other standout pieces include August ("A Chance Meeting"), a quintessential Alan Lee work, and October ("The Hunt for the Ring"), a brooding Howe piece divided between starkly contrasting halves, sinister Black Rider on the left and peaceful hobbitlands on the right.

The whole is wrapped up by what might be called liner notes by Brian Sibley about UNFINISHED TALES, including a brief recollection how he was able to put some of UT's revelations to good use with his script for the BBC radio adaption of LotR, then in the works.

Have to admit that I found it slightly odd that special events called out on calendar pages were both those found on most calendars (e.g. Martin Luther King's birthday) and Tolkien-specific (Tolkien's birthday). The latter are mostly limited to the original publication dates of various of Tolkien's works (e.g his BEOWULF translation). If they were going to include the latter I wish they'd have availed themselves of Wayne & Christina's excellent CHRONOLOGY and done more of it. But this is a v. minor quibble: the art is what matters, and they've done a good job with it.

**we have two original Tolkien pieces by Nasmith hanging in our living room downstairs, so obviously we're admirers of his work

***that is, if you go by the latest version of their legend found in HME.XII.385

Posted by John D. Rateliff at 4:22 PM No comments:

So, I was pleased and surprised when Janice shared with me this Tolkien-themed item posted earlier today, a new piece of art by friend Stan! celebrating Hobbit Day. 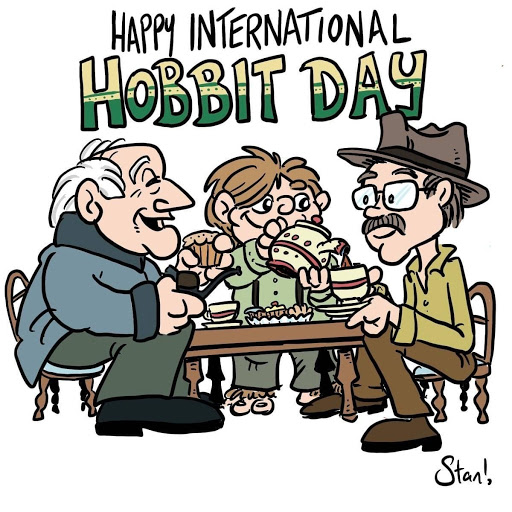 The Centre for Fantasy

So the best news I heard this past week was the announcement of the establishment of The Centre for Fantasy and the Fantastic, a center for fantasy studies at the University of Glasgow, which offers a MLitt in fantasy.

Here's a great short piece by Dimitra Fimi giving an overview of the Centre's goals and planned activities:

They launched the new programme with a 'webinare' event: a lecture by Ellen Kushner and panel discussion by Terry Windling, Brian Attebery, and Rbt Maslen:

A general overview of the Centre's planned activities --"the world's first research centre focusing purely on the fantasy genre . . . everything from the works of J. R. R. Tolkien to Dungeons & Dragons and Game of Thrones"--can be found here:

I was particularly interested in the requirements for the degree, as detailed under "Programme Structure" in the following link:

Looking at this, I'm immediately curious over the break-point between their two survey courses, Fantasy from 1780 to 1950 (Part I) and Fantasy from 1950 to Present (Part II). If I were to get the chance to take such a course the third topic I'd probably have gone for wd be either "Children's Fantasy Literature" (the distinction between fantasy for younger readers and for adults being a permeable one) and "Early Modern Mythmaking".

It's also exciting to know that dissertations are currently in the works on Terry Pratchett (the first person knighted for writing fantasy), stage-plays based on fantasy novels (which I assume will cover things like the popular adaptation of Pullman's HIS DARK MATERIALS and perhaps the LotR musical) and Tolkien as seen by younger readers.

I have to confess found myself wistful, thinking about what might have been had there been an option like this one back in 1981 when I was wrapping up at Fayetteville and looking around for someplace where I cd work on a doctorate while continuing my Tolkien studies. As it turned out, it was like pursuing two courses of research at the same time -- which is probably one reason it took me so long.

For all of those of us who were discouraged (to put it mildly) from researching Tolkien, and for those like Verlyn Flieger and Douglass Parker who found a way to teach such courses despite lack of departmental support (and sometimes downright disapproval), this is a great day.

Posted by John D. Rateliff at 5:37 PM No comments:

Waking up this morning I saw that the sky was yellow-grey, and thought today's theme song wd be Sting's "Wild Wild Sea/The Soul Cages" with its lines "pale yellow sky" and "the sky was the color of clay." Except that it's more like the color of hay, like walking around inside an old sepia photograph.

All this is of course the result of smoke --not just from the fires down in California and Oregon and eastern Washington but closer to home, in neighboring towns on the outskirts of the Seattle area such as Sumner and Bonnie Lake (about fourteen and twenty miles from here, respectively).

It's alarming to have to stay in because the air quality's so bad but things cd be much much worse.

The cats, for their part, know something is up and are staying close to us, keeping an eye on what we're doing, when not prowling about.

A Warning to the source study-ist

So, I've been reading David Lindsay's DEVIL'S TOR (1932), the last book he published in his lifetime. I'd read it before during my grad school days at Marquette --say 1984 or thereabouts-- but found I've more or less completely forgotten its contents. So I was bemused by the following passage from Chapter VII:

The torch in hitting the ground had escaped from his hand, so, staying down, he began to grope for it, but could not immediately find it. Then, as he proceeded to crawl here and there with lightly feeling fingers, they encountered something else small and hard on the rock floor, which was not the torch. Doubtless it was some tomb treasure that he had overlooked—it surely felt like a precious stone or talisman, half-round, half-flat. Out of the question it was to examine it there and then, so he slipped the thing into his coat pocket. A moment later the torch met his fingers.

Taken out of context, it'd be tempting to make the argument that this scene had some influence on the famous scene in THE HOBBIT (Chapter V) where Bilbo finds himself alone in the dark far below the surface. And we do know that Tolkien read Lindsay (albeit a different book, 1920's A VOYAGE TO ARCTURUS).
Except that it all breaks down as soon as we look at the context: we know from the dating that the two books were being written concurrently and it’s impossible for either to have been influenced by the other. It's good to be reminded that sometimes similar circumstances produce similar scenes --cf. Edgar Poe's "The Pit & the Pendulum" anyone?
—John R.
--current reading: DEVIL'S TOR and the latest 'Royal Spyness' mystery, along with some other long-read on-again/off-again works.
current music: McGear (1974)
Posted by John D. Rateliff at 9:06 PM No comments: