How Small is Too Small?

So, while in a nostalgic mood I was looking over another of my old editing jobs, the one time I edited Ed Greenwood. The project in question was the Living City compendium THE CITY OF RAVENS BLUFF (1998), the members-created home base for the RPGA, TSR's organized play AD&D setting.*

The turnover came in massively over the planned word count (not an uncommon outcome with Greenwood projects, given his ever-fertile imagination). I consulted with my boss, and rather than cutting the text by 40% we decided to keep all Greenwood's and the fan-generated text.
We made it all fit by reducing the font size to 7-point type.
For 1700 words per page.
For 160 pages.

My memory of the next month is of long hours spent at my keyboard down at the office, both during the weekdays and during all the weekends too until the project was done.

It wd be nice to be able to say that I got extra time to work on this one, given the amount of extra material I had to work on, but alas that was not the case.

Still, folks seemed to like it, which is the important part. And fans of the Living City who bought it certainly got their money's worth.


P.S.
For the sake of comparison, here's a page from the 1st edition PLAYER'S HANDBOOK, which now looks really small to my aging eyes. This is followed by a page from the current PH, which while smallish is much more readable. Lastly comes a page from THE CITY OF RAVENS BLUFF, just to show how small 7-point type is. 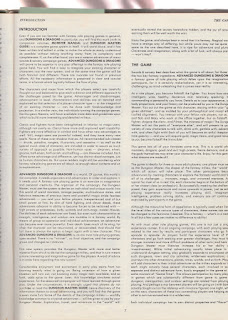 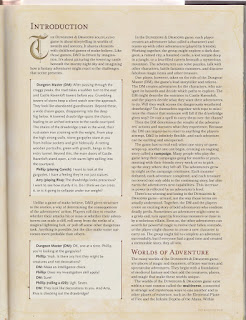 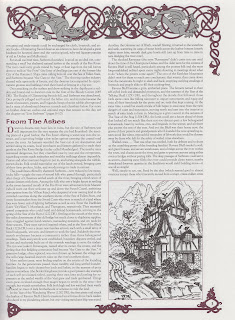 *One of the seven projects I edited that first year at WotC --ironically while waiting to begin work editing a project that never came to fruition: the DOMINARIA setting for AD&D. The team members for that one were Lisa Stevens, Jonathan Tweet, Jesper Myrfors, and myself, shortly thereafter joined by Chris Pramas

Posted by John D. Rateliff at 8:53 PM No comments:

Dunsany on the Pharaoh's Boat


So, amid the many pieces, good and bad, about Egypt I've been watching in recent weeks were some about Pharaoh Khufu's boat, found buried alongside The Great Pyramid. This reminded me of Dunsany's story about the pharaoh's boat. I'd read this years ago but not realized back then how large and impressive the ship was. For those who like both Egyptology and fantasy literature, the story can be found in THE FOURTH BOOK OF JORKENS (Arkham House 1948), pages 101-103.* For those without access to the original volume, here's a slightly abridged version of the story:

. . . I was doing a bit of archeology, digging near the Great Pyramid, a most fascinating occupation . . .

I don't know much about archeology, but my friend Ali Bey knew everything, and I asked him to come and dig with me for a few weeks, and we put up a couple of tents and employed a few workmen, and set out to look for that past . . . [H]e smiled when I said we would dig for a few weeks . . . He tried to get me to see that it would be a matter of months: and so it would have been . . .

[W]e had not been digging long when we came to rock, natural rock, but going down with such a queer curve on it that we soon thought it was not as natural as it seemed; and in a few days we came on a boat.  The rock was nothing else than a sepulchre, hollowed out to bury a boat in, a fine boat too, some twenty yards long. Well, of course we sent it to the museum, and some oars we found with it. And that night Pharaoh appeared to me in a dream.

He came into my tent in the moonlight, from the direction of the Great Pyramid, and asked what I'd done with his boat. Well, I said that I didn't think a man wanted a boat in a desert, and that I'd sent it away. And he said How did I suppose a king could row across the sky with the stars if he hadn't got a boat? That, of course, is a difficult question to answer, and I didn't do it very well; and I could see he thought me the damnedest idiot that ever had been. I tried a few lame excuses, but made no headway, and he was only getting angrier.

You see it wasn't any use to suggest an aeroplane, because Pharaoh would never have heard of one, and to try to make him see that a king needn't row across the sky was entirely impossible; one saw that at once: he merely thought me a hopeless idiot for having such an idea. Indeed my point of view seemed so idiotic to him that he was almost inclined to spare me, and stood there thinking, all dim in the moonlight but then he decided that not even my ignorance was any excuse for taking his boat away from a king, and said briefly that the penalty must be death. Well, that, though it didn't wake me up, stimulated my wits a good deal, and I said, 'Look here, you can't do that.'

'Why not?' asked Pharaoh, immensely astonished.

'You haven't the power,' I said. Which seemed pretty obvious, as he was not appreciably thicker than a shadow.

'I have great power in dreams,' said Pharaoh.

And the sound of the word made me realize at that moment that it was only a dream, and that I must wake at once. It took a huge effort of will. I realized that, if I stayed asleep any longer, I should be in Pharaoh's power. I could hardly do it, though I knew my life was at stake. It was a sheer effort of will. Well, I woke up and Pharaoh vanished, and I reached for my shot-gun. I always keep a 12-bore shot-gun beside my bed, in deserts and such places, because you never know when it may come in handy. Not loaded, of course, because a loaded shot-gun beside your bed may be more dangerous than anything else, but I kept the cartridges handy, and now I slipped two of them in, and just in time.

Certainly, said Jorkens. But don't you see that, if Pharaoh could send a dream like that to me, and a very vivid and detailed dream, he could just as easily sent it to my friend Ali Bey, whose tent was only thirty yards away. And that was the very thing that Pharaoh did. I expect he communicated easier with Ali Bey than he did with me, because Ali, like several Egyptians that I have known, had a quite unmistakable likeness to some of the busts of scribes and priests and officers of some of the earlier dynasties that used to reign near that pyramid; so that he was almost certainly descended from men who had long ago formed the habit of taking orders from Pharaoh. This naturally made it easier for Pharaoh to get in touch with them quickly.

Anyway, he did; because I heard bare feet near my tent, which I would never have heard if I had not been listening for them, and there was Ali Bey outside with a long knife in his hand, standing quite still. What made him stand still must have been the click of my gun closing, which to a sportsman and first-rate shot like Ali Bey must have been quite unmistakable.

The error I think Pharaoh made was one of the greatest errors a ruler can make: he was too detailed, instead of leaving trifles to his subordinates. What he probably did was to inspire Ali Bey to take a sharp knife in his right hand, and so on and so on . . . Of course he knew nothing of fire-arms; but if he had left the details to Ali Bey, who, as I said, was an excellent shot, instead of commanding him to come with a knife, there would have been no difficulty in shooting me through the side of the tent in the moonlight.

Well, Ali Bey walked quietly back to his tent after one or two words to me appreciative of the moon, and gave me no more trouble that night; and I left before dawn.

I often write to Ali Bey, and get charming letters in answer, and letters of a very high scientific value. I bought a canoe at the Army and Navy Stores and sent it out for Pharaoh, to be put in the hollowed rock; and Ali saw to that. But I never quite knew if it would satisfy the old king: you see, he had been accustomed to a boat twenty yards long; and, even if the canoe suited him, one never knew if his priests wouldn't say that it was the wrong make. No, I never went back to Egypt. I think the country is rather too full of dreams.

And for a glimpse of what one of the original excavated boats looks like, here's one of the myriad short video pieces on the topic. Since Dunsay's story was published before the discovery of the particular boat shown here (the fifth I think), he must have been drawing on one of the previous discoveries.


*Taking my copy of this book down from the shelves for the purposes of this post, I was surprised to see that it's autographed "Best wishes -- August Derleth -- 7/27/68".  According to my annotation I got this book on Saturday April 19th 1997 as a gift from my friend the late Jim Pietruez. So thanks Jim for the good deed, still much appreciated after all these years.

Tolkien and Gibbon's DECLINE AND FALL

So, a few years ago I posted on some online forum* a query about whether Tolkien ever read Edward Gibbon's famous THE HISTORY OF THE DECLINE AND FALL OF THE ROMAN EMPIRE. On the one hand, it is a standard work on a subject of perennial fascination, widely read and hugely influential. On the other hand, this work was on The Index, the list of books Catholics are forbidden to read without special permission. The list was abandoned but not abolished in the 1960s, but it was in force for most of Tolkien's lifetime.

Oronzo Cilli, in TOLKIEN'S LIBRARY, assumes Tolkien owned or at least consulted a copy of this book on Shippey's authority (Cilli 95-96). Shippey makes a good case for Tolkien's first-hand knowledge of Gibbons largely through inherent probability (Shippey's Road 1992 edition p. 301). Now thanks to John Bowers' new TOLKIEN'S LOST CHAUCER, we have direct proof. Bowers reproduces a manuscript page that is part of the draft for JRRT's commentary on Chaucer's translation of Boethius (Bowers page 144) in which Tolkien cites Gibbon, directing the reader to a specific chapter of DECLINE AND FALL. Based upon this, Bowers concludes "Tolkien knew Gibbon from his own reading" and also believes that JRRT "shared the historian's sense of decline when writing about the 'long defeat' in Middle-earth." (Bowers 147).

So, that seems to settle things. It's nice to have proof of what we already believed.

Of larger significance, this new evidence that Tolkien read at least one work on the Index has interesting implications of its own.

--John R.
--current viewing: House Judiciary Committee Hearings (in part)
--current music: "Why Don't You Love Me Like You Used to Do?" by Hank Williams (stuck in my head the last three days)


*I'm no longer sure which. Perhaps the Mythsoc list. At any rate, it seems not to have been on my blog, where I usually post such things, and so may have pre-dated the blog's commencement.--JDR
Posted by John D. Rateliff at 10:35 PM 4 comments:

So, I have Janice to thank for the following philosophical, not philological, take on Tolkien:


A little poking about reveals that they also do D&D. In fact, it's something of a running theme of theirs, with eight iterations so far: