"Why make a mistake once when you can repeat it over and over?"

So, here's what the excellent website for discussion of all things D&D-ish (esp. 3e) make of Ben Riggs' book, SLAYING THE DRAGON.

For those who have time, there are some interesting exchanges in the comments, including at one point some back-and-forth disagreement between two ex-TSR folk.

My favorite bit though is one poster's observation that

So many products I loved

would likely never had existed

if TSR was a well-run company.

The irony of that really hits home.

So, poking about on YouTube the other day (as one does), I came across a video review of Riggs' new book on the site GREYHAWK GROGNARD. In brief, this champion of TSR's early game world in general and Gary  Gygax's contributions in particular considers this a pretty good book, but faults it for being insufficiently deferential to Gygax on the one hand and for not portraying Lorraine Williams as a fiend in human form on the other.

In other news, I've been reading through the book, taking my time so as to enjoy the journey.

Plus, I got rid of seventeen boxes of books last week, so I now have that much more space to sort out the next lot.

The Fall of TSR

So, yesterday my copy arrived of Ben Riggs' new book, SLAYING THE DRAGON: A SECRET HISTORY OF DUNGEONS & DRAGONS (St. Martin's Press, 2022). I'm one of the former TSR people who was interviewed for this, particularly for Chapter Fourteen: TSR AND TOLKIEN, OR THE GAME THAT WAS NOT, about the time when TSR turned down the Tolkien license. Here's a link to a posting of that chapter; thanks to friend Matt F. for the link.

It's rare that I get to wear both my gamer and Tolkien scholar hats at the same time, so this was a fun one for me. Plus while I know a lot of the stories Riggs collected, many more are new to me, or cast a different perspective on events.

More on this one as I work my way through the book. 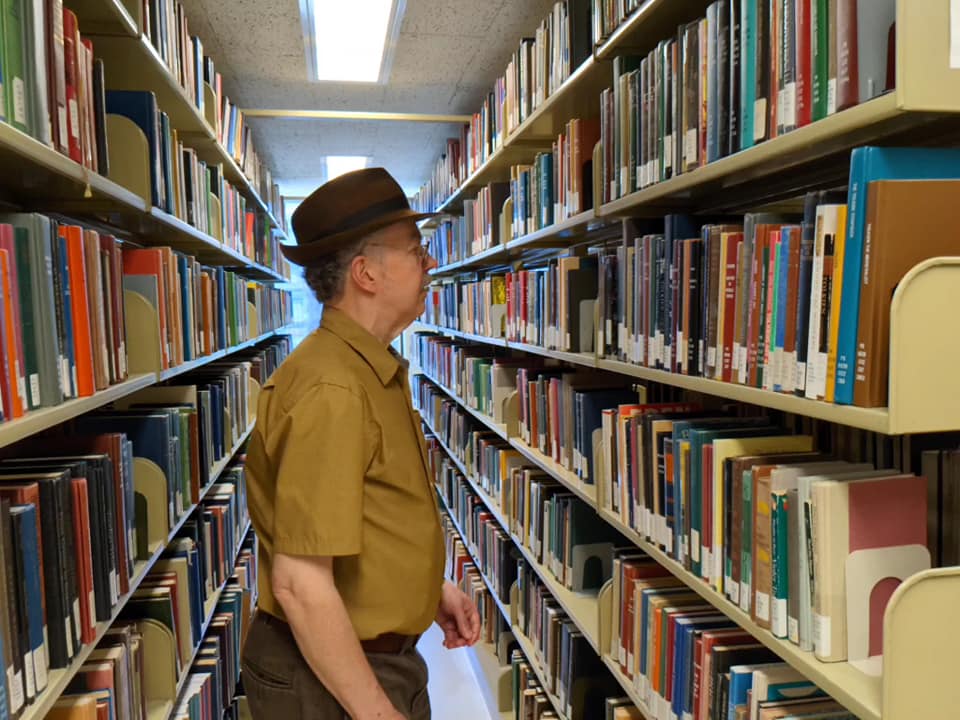 So, this week I went up to the Suzzallo-Allen library on the University of Washington campus --a place I used to visit regularly, especially when I was in the midst of a project and had to run down lots of bits and pieces, odds and ends you just can't find online. Plus, libraries are great places to find out about books you hadn't come across before.  It's no surprise, then, that in my string of research trips to Marquette over the last few years, I spent most of my breaks wandering over to their Memorial Library to do a thorough poke-about, mostly among the PRs and PSs.

But the coming of Covid and my giving up driving curtailed these visits, so much so that I think it's been about three years since I'd been there (I recall I was finishing up my Nodens piece at the time, for the Verlyn Fliger festshrift).

This visit was to renew my library card: non-student/non-faculty/non-alumna can get one by making a yearly donation to the Friends to their Library program, which we did. Then I went upstairs to poke around a bit and see if things were still more or less where I remembered them. They were.  I want to look up a quote by Roy Campbell but, as my preparatory online poking about in the catalogue had shown, the book I wanted was offsite in storage. I wasn't able to put in a request to have it brought up to the main library, since I needed the renewed card for that, and I cdn't get the card renewed without actually coming to the main library.

So, as long as I was there, I looked over their Tolkien shelves, then Larkin, then Lewis, then Williams, then Wodehouse, then (shifting to a different part of the library), Ezra Pound, then Shirley Jackson, amongst others.

Didn't go by the great Reading Room, my favorite place to work in the library, since this was a renew-contact visit, not a get-some-work-in session.

In two weeks or so, I'll see about getting that Campbell volume to see if the passages I remember (a) is actually there and (b) might add up to a note. Or not. We'll see.

current reading:  HAWAII UNDER THE RISING SUN: JAPAN'S PLANS FOR CONQUEST AFTER PEARL HARBOR by John J. Stephan (1984), a book I learned about from my friend David Bratman's blog.

Posted by John D. Rateliff at 7:30 PM No comments:

So, this morning I forwarded a comment, only to lose track of it. Can the person who posted it re-post?

Posted by John D. Rateliff at 8:02 PM No comments:

THE FALL OF NUMENOR volume

So, thanks again to D.F. for news of the next forthcoming Tolkien book, due out this November: THE FALL OF NUMENOR.  Amazon has relatively sparse information on it:

--that it is due out in November

--that it's a fairly substantial volume of 320 pages

--that it'll be edited by Brian Sibley, who's mainly known for his work on audio adaptations of Tolkien's work

--and that illustrated by Alan Lee, Christopher Tolkien's choice to illlustrate the works he edited.

Clearly this volume extends the BEREN & LUTHIEN and FALL OF GONDOLIN treatment to Second Age/Numenor material. The question is, how far does it go? The only text mentioned by name are the relevant passages from LotR Appendix B: The Tale of Years. AKALLABETH would seem to be essential, and THE FALL OF NUMENOR itself (the one they've taken the title from). But what about THE DROWNING OF ANADUNE?  Or THE MARINER'S WIFE?

Or, if the goal is to bring to the forefront some of Tolkien's most interesting lesser-known works,  how about his little known time-travel novel, THE NOTION CLUB PAPERS, along with his earlier similar attempt along the same lines, THE LOST ROAD?

One good thing: November's really not that far away, so half a year from now we shd know.

I'll be looking forward to it.

A NEW BOOK ON THE HOBBIT

So, here's a new (forthcoming) book on THE HOBBIT due out sometime later in the year from Palgrave/Macmillan, part of their Palgrave Science Fiction and Fantasy: A New Canon.

I had not heard of this one before; thanks to D. for the link:

Having written so much on THE HOBBIT myself, I confess I'm curious what approach Tally will choose. From the online description it sounds as if he's chosen a Marxist approach, which I don't think has been done at book-length before. Probably not my cup of tea, but I'll want to check it out for that very reason.

The Secret History of D&D

So, a few days ago I saw that Ben Riggs' book is due out in July. Then I did a double-take and realized that I was reading this notice on the last day of June and that, disguised by an unflipped calendar page, the release is only three weeks away,

SLAYING THE DRAGON: A SECRET HISTORY OF DUNGEONS & DRAGONS

This is a book I've been waiting for for a long time. I was one of the people he interviewed, and I was impressed by how great an effort he put into trying to be fair to all sides.  It'll be interesting to see how he puts the anecdotal information, the story as people remember it, together with the contemporary documentation.

My favorite quote so far, from the interview on the Noble Knight Games site:

"Really, after you get your first box of documents

from someone requesting to remain anonymous

that tells a story no one has heard before, it's hard

not to write a book about it"

current reading: Peter Cannon's Twayne US Authors series one-volume critique of H. P. Lovecraft. Makes for a good refresher, as it discusses pretty much all his stories in chronological order. Also it's v. readable, which makes a good contrast from some heavier fare.

Posted by John D. Rateliff at 5:03 PM No comments: 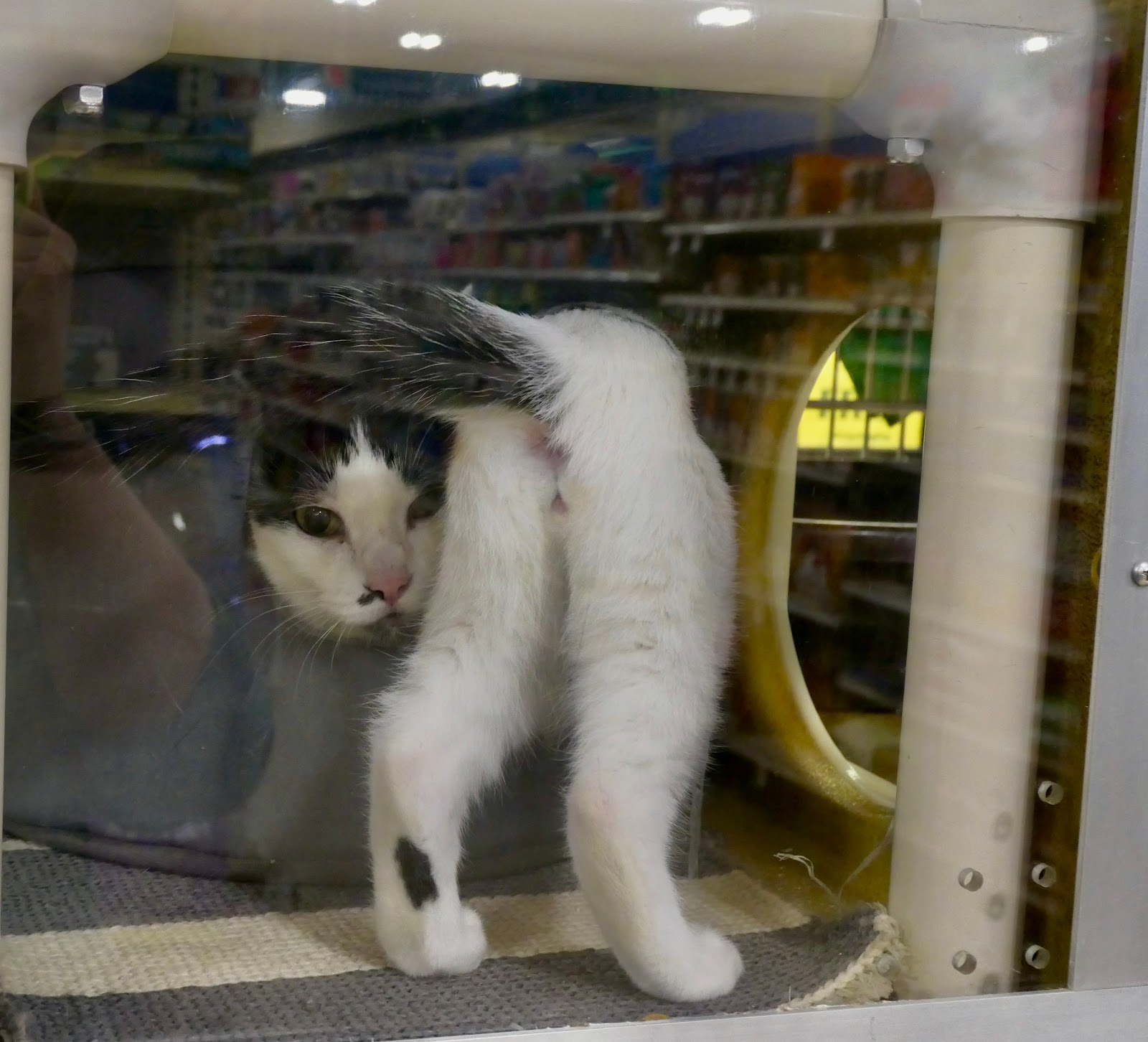 (Molly, front and back views at same time)

JOSHUA and OLIVE, our black and white adult bonded pair, have settled in after all this time and become comfortable with the room. They came out to explore, did an inspection, and passed judgment. It wasn't too long before they went back into their cages. There they gloried in attention inside their cage, alternating games with petting sessions.

Note: looks to me as if ears need cleaning, but that might be a two-person job.

Next was ZITA, chirpy as ever, our other veteran who's been with us a while. She particularly enjoyed the string game today, Seemed so relaxed and confident that I took her for a nice walk, about ten minutes. She generated a lot of comment. Then back in for more games. She loves the smell of catnip. She dislikes being picked up—perhaps it's uncomfortable for her? One of my cats, the late lamented Rigby, had a separated sternum, which meant we had to be careful when picking her up not to lift with a hand on her chest.  If Zita has a similar sore spot we might be able to move her more comfortably.

Our other adult bonded pair, newcomers  MALIFICENT and SKREECH, are a big black mother-and-son duo (weighing between fourteen and fifteen pounds each). He's the one with all the long black fluffy fur and she's the slightly smaller smooth mostly black one with some highlights on the face. Both very friendly. He was so relaxed and friendly that I thought I'd try him for a short walk, but he made a squirming motion that got him right out of the leash before I cd get it properly on him. Then he very gently nibbled on my hand—which I took as a pretty clear message how he felt about that. For her bit, after playing and exploring some she went back in the cage, where she head-butted me (head-to-head).

That left MOLLY, the new mamma kitty, and three very energetic kittens. She's not much larger than the kittens. Quite shy and prone to panic but went from hiding in her cat-cave when I arrived to doing a thorough but wary exploration of the room. She was on top of the cat-cave when I left, rather that inside as when I arrived, which I took to be a good sign.

The three kittens loved being out, playing all the games and tearing around the room. They're not fond of being picked  up but think will wear off as they get more socializing. It's difficult to describe, but they'd jamming one of their toys in such a way that it blocked movement between sections of their cages.

The kittens got a lot of attention; don't think they'll be with us long.

Posted by John D. Rateliff at 9:47 PM No comments: