So, of all the boardgames TSR put out over the decades without a doubt, hands down, by far the weirdest is Tom Wham's SNIT'S REVENGE (1977). 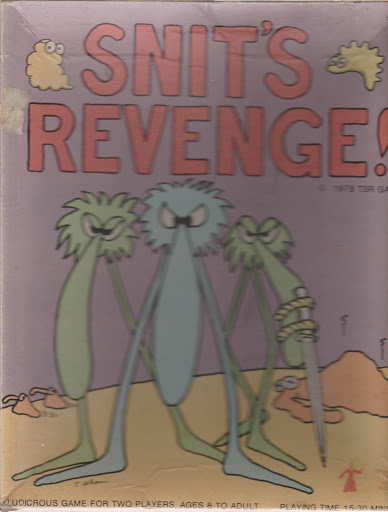 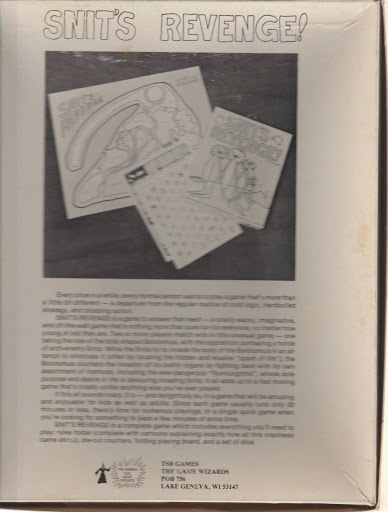 Like most of Wham's work,* this had originally appeared in DRAGON and was self-illustrated in Wham's distinctive cartoony style.

Most of the game takes place inside the internal organs of one monster (the Bolotomus), which is being invaded by a number of small, fast creatures (the Snits). The Bolotomus player marshals his or her defenses, sending out Runnungitms (essentially antibodies) to stave off the Snits. The Snits player runs riots inside their foe, kicking things to death.

Notably for such a silly game,** SNIT'S REVENGE has a stellar cast of credits. In addition to Wham's own contributions to 'Design & Art' and Gygax's nod for "Inspirations", "Development, playtesting, and other venerable aid" are ascribed to a who's who of TSR greats:

Most of these had moved on by the time I came to TSR, the two notable exceptions being Skip Williams (long a stalwart of the RPGA and later driving force behind the 3e Monster Manual) and Dave Sutherland (mapper extraordinaire). But Wham cd still be seen around town sometimes, puttering around in overalls around the Lake Geneva library (I  was told he worked there as a custodian). I was also told that he'd been married to Rose Estes, who wrote a number of the early Greyhawk novels.

Wham was also exceptional in that most of TSR's early boardgames were one offs, the only boardgame TSR produced for that author. By contrast Wham created a number of such games. There was not only SNIT'S REVENGE's predecessor (SNIT SMASHING) but also its successor (RUNNGUS'S GAME).

One of these games, THE AWFUL GREEN THINGS FROM OUTER SPACE, merits a post of its own, which shd follow in a day or two.

Finally, a few features of my copy of SNIT'S REVENGE are worth calling out. For one thing, it's autographed (on the gameboard) by Wham himself. For another, I got this game in a silent auction at RockCon in Rockford in 1993 but was not its first owner. Not only had all the little chits been carefully punched out but some sheets recording the names and stats of Snits, SuperSnits, and locations set down for some long-ago gaming session by one Mike Burba were inside the box. So I'm glad this game is one that didn't sit pristine on a shelf but got played and, I hope, enjoyed.

*By the way, the name is pronounced so that 'Wham' rhymes with 'Tom'

**It says a lot about the game that two and a half of its six-page rules come in the form of a comic strip explaining the cosmology behind the game.

I forgot to add the sku designator: it's product #5003