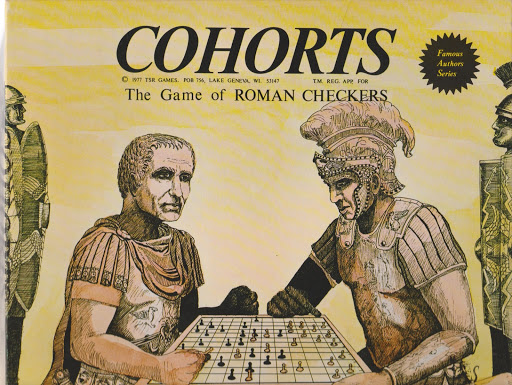 So, another of TSR's early boardgames is more significant for its associations than its gameplay. Published by TSR under the name COHORTS: THE GAME OF ROMAN CHECKERS,* it's a reconstruction of an ancient game, the rules for which are lost. The game has different names in different cultures. From a quick survey I suspect some of these are different games now associated together more than is perhaps justified.

More interesting than the game itself is the fact that it was the work of L. Sprague de Camp. At first de Camp seemed an odd choice to create (or re-create) a boardgame. Then it hit me: one of de Camp's most famous works is his LEST DARKNESS FALL (1939), a Connecticut Yankee novel about a modern-day engineer who finds himself back in Late Antiquity Rome.  If we consider de Camp, who was something of a polymath, an expert in all things Roman, his authoring a Roman or pseudoRoman game makes more sense.**

de Camp's name appears at the end of the rulesheet and on one of the box sides, which says

COHORTS, THE GAME OF ROMAN CHECKERS,

The box bottom  reads
COHORTS is the third title in TSR's "Famous Writers Series",
and this edition of the game was prepared by noted writer L. Sprague de Camp.

The phrase "Famous Author Series" appears in a starburst in the upper right corner of the boxtop.

So, what is the Famous Writers/Authors Series, and what are the other entries in it (presumably at least two, if this is the third one)? I assume the Leiber/Fischer LANKHMAR Game was one, and that the Larry Smith version of Tolkien's BATTLE OF FIVE ARMIES the other.

Finally, for those trying to sort out the seqyence, this game's stock number is #5002.

*Thanks to Steve Brown for my copy of this.

**This was not de Camp's only contact with TSR: DRAGON MAGAZINE reprinted one of the  Harold Shea 'Incomplete Enchanter' stories.

Regarding other games in the "Famous Authors" series, there is a 1977/1978 TSR catalog called "Games for Imaginative People" in which the entry for Cohorts says "The third in TSR's "Famous Authors Series" (LANKHMAR, WARLOCKS & WARRIORS)..." And towards the bottom of this post you can see an ad for W&W that ran in the Gen Con X Souvenir Program (1977), which says it was designed by "well-known author Gardner F. Fox" and that it is part of the same series as the other two games. Fox is probably better remembered now for his comic book work, but at the time he'd just finished his Conan-inspired Kothar and Kyrik series (each of which is referenced by name in Appendix N in the DMG) and was having similar Niall of the Far Travels stories published in THE DRAGON. For the 1977 Basic rulebook, Gygax (or possibly another editor at TSR) went as far as changing a short list of authors that Holmes mentioned in the "Dungeon Mastering as a Fine Art" section of the manuscript from "...the fantasy worlds of Robert E. Howard, Michael Moorcock, classical mythology..." to "...the fantasy worlds of Fritz Leiber, Robert E. Howard and Gardner F. Fox..."

Yes, it's pretty clear you've solved the minor mystery of who the three fantasy masters TSR meant; I'll add more on this to the next posting (re. WARWOCKS & WIZARDS).
--JR

You're right: once you'd pointed out de Camp's long association with Prett, and Pratt's fame as designer of what was probably the major wargame of its time, de Camp's appearing in the role of historical game re-creator makes perfect sense..