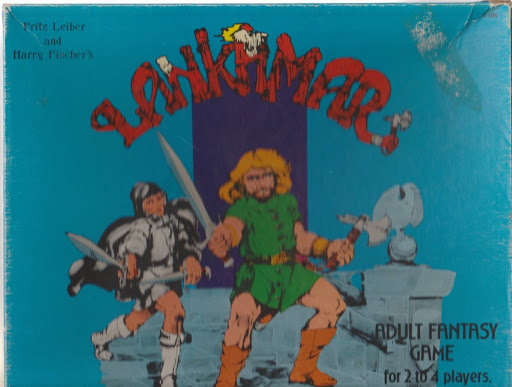 So, I like to make lists. For example, years ago when I was at TSR/Lake Geneva, I attempted to create a complete product list. Every D&D/AD&D rulebook and boxed set and module. Every boxed set or module for all the other TSR rpgs, like GANGBUSTERS and TOP SECRET and BOOT HILL.  Every book to come out of TSR's book department --not just all the shared world novels but also the pick-a-path books in their various guises. In the end I didn't quite manage to get everything, but I came pretty close: call it a good faith effort.

And while poking about in the company's history, I became aware aware that TSR had published a number of board games in the early days of the company. By far the most important of these, and the best known, are DUNGEON, Dave Megarry's boardgame encapsulation of D&D, and Mike Carr's FIGHT IN THE SKY / DAWN PATROL. The rest had largely vanished out of the collective memory.*

Once I was aware these games I started picking them up as opportunity offered. I have eight and know of a ninth;  I don't think there were ever more than ten or twelve in all. Anyway, thought I'd do a few postings for the sake of those curious about this long-ago sideline.

Being a big Leiber fan (nobody wrote sword and sorcery better) I was excited to learn that TSR had published a Lankhmar boardgame back in 1976. Leiber fans know that Fischer, Leiber, and a third person whose name I forget created a Fafhrd & Gray Mouser boardgame back in 1937, only about three years after Fischer & Leiber had created the characters. The game, rumored to be of great complexity, thus sounded likely to reveal new information about the characters and their world.

Imagine my disappointment then to discover that this is not the game Fischer and Leiber created back in 1937, but a modern (1976) redaction from it whipped up by Gygax, Rob Kuntz, and Brad Stock (a name I've otherwise never come across).

The full credits are of interest in themselves:

—this is thus one of the few TSR titles to include a credit for Arneson, albeit an ambiguous one.

The account of why we are getting this game and not the one we wd have expected comes near the end of the rulebook (emphasis mine):

THE HISTORY OF LANKHMAR:

Most readers will be surprised to learn that the Game of Lankhmar was originally conceived in 1937 and has been played down to this time! It has withstood a rather severe test of time, particularly for a game based on a fantasy concept. Those who have read THE SECOND BOOK OF FRITZ LEIBER (DAW Books, Inc. New York, 1975) will know that Harry Fischer was a prime force in the development of the world of Nehwon, Fafhrd and the Gray Mouser, etal. Harry conceived the basis for the game also, and he and Fritz developed it into an exciting contest, quite chess-like in its movement and combat systems -- in fact, the original playing board was squared off rather than gridded with hexagons. The result was a spectacular game with a gigantic board, raised terrain features, and impressive pieces with weapons bristling forth; and various newspapers printed pictures of the game and wrote about it over the years. In corresponding with Fritz Leiber the subject of the game was brought up, and soon a three-way discussion of its possible appeal now was underway between Fritz and Harry and Gary Gygax. The end result is the game you have before you.

Unfortunately there was no way LANKHMAR could be produced in the form that Harry did it in originally, not unless the game could be sold for fifty or a hundred dollars!  And if the form was changed much of its appeal would be sacrificed too. As changes in sone [sic] aspects were necessary anyway, a study was begun to see how the game would be affected by certain other changes as well. Would it be possible to change the board to a hexagonal system and incorporate the latest fantasy conflict game concepts into the original design? If this were possible it was envisioned that what was lost from the original eye-appeal and sweeping movement could be off-set by additions of greater mapboard graphic detail, more realistic combat simulation, and play which brought forth more of the flavor of the world of Newhon. After a long period of development work, Fritz and Harry gave their approval to this version of their game. The original Game of Lankhmar is still herein, but in a format which enables thousands to now enjoy playing the game which was formerly limited to just a few! We certainly hope that you will find it as interesting and informative and challenging as we do.

The upper right corner of the box top bears the stock number F 105. If I understand TSR's rather confusing designators at the time,  probably means that this, a fantasy game, is the fifth of their boardgames.

Since it never saw the light of day, I hope the original is preserved in a museum or special collection. At the very least it'd be nice to see one of those photographs mentioned.

Finally, I didn't know this when I bought the box, but the rulebook inside my copy is autographed by both Fischer and Leiber. Definitely a keeper.

*I shd have asked Dave Sutherland but never thought to.