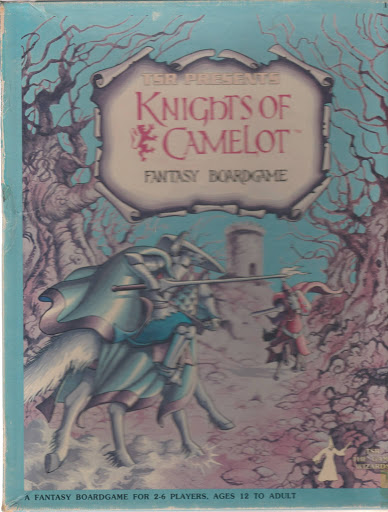 So,
the next game (product #1009) on the shelf is somewhat later (1980) and more appealing in its art and components, with an attractive cover and pleasant color pallet for both box and map. Written by the Rahmans, this is a much more substantial work than, say COHORTS of WARLOCKS & WARRIORS, with a thirty-six page rulebook, poster-sized map, encounters sheet, dice, chits, and cards.

This was another purchase from Crazy Igor, apparently a Christmas present to myself since I got it December 21st 1993 (a Tuesday). In all the time since I've only played this game once, some years back, when Steve Winter ran it for several of us who'd never played and were curious. I remember I was underwhelmed, but I don't remember why.

Similarly I know there were two editions of this game, not sure why. Maybe I'll see if I can run through a solo game before it goes out the door. It might be fun to see how well it might match with PENDRAGON. I do see from BoardGameGeek that there's a DRAGON magazine article offering rules on how to play a varlet rather than a chivalrous knight,* which again sounds worth checking out.

One final feature of note is that the map is credited to Darlene Pekul and the cover art to "Eymoth and Erol Otus". Eymoth I haven't come across before. Otus by contrast is one of the most distinctive artists TSR ever employed. I have to say though that the cover art for this game is unusually subdued by his standards and I wdn't have recognized it as his work.

Next up: something completely different (SNIT'S REVENGE).