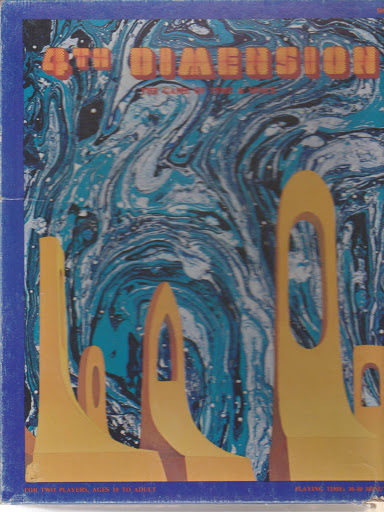 So, this one is a bit of an odd man out, being the American adaptation / edition of a previously published English (UK) game. It'd be nice to be able to say that this game about Time Lords was connected in some way with DOCTOR WHO, but no such luck. Instead this is a positional game all about positioning your markers most advantageously; it has echoes of Stratego and Chess

And that's really about it. Perhaps the design has appeal that's not apparent from just skimming the rules and setting up the pieces. Unfortunately none comes across in the two online play-throughs I found on YouTube / Boardgame Geeks. It also has the problem that the gamepieces look too much alike and the board is too small.

One mildly shocking feature of the game is its naming one standard type of move a "suicide".  There's an unfortunate bit of word choice that wd never see the light of day today.

The games' product number/stock number is #5004; it's also a bit later (1979)  than the other games I've been looking at in this string of posts.

In the end, I get the sense that this game functions better as a piece of set design in, say, an old episode of STAR TREK than being something someone wd actually want to play. Pity.