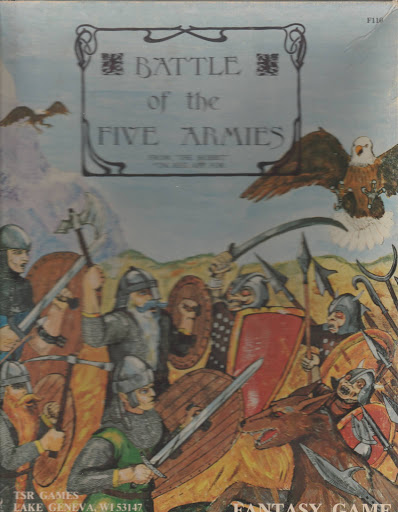 So, this might be known as The One That Got TSR in Trouble, were there not competition for that title (cf. WARRIORS OF MARS). Gygax tells the story in anecdotal fashion:

by the Saul Zantes (sp?) division of Elan Merchandising on behalf of

the tolkien Estate. The main objection was to the boardgame we were

publishing, The Battle of Five Armies. The author of that game had given

us a letter from his attorney claiming the work was grandfathered

because it was published after the copyrights for JRRT's works

had lapsed and before any renewals were made. The action also

orc, and warg from the D&D game. Although only balrog and

warg were unique names we agreed to hobbit as well, kept the rest,

of course. The boardgame was dumped, and thus the suit was

settled out of court at that.

Since it'd take a whole separate post if not more to unpack and fact-check Gygax's account  (e.g., Zaentz's 'Tolkien Enterprises' did not represent the Tolkien Estate, though they often found it useful to give the impression that they did), and because I've written about this boardgame elsewhere, all I'll say about it here is that my favorite rule can be found at the bottom of page 5 of the rulebook:

SMAUG VS THE DWARVES

--Think over that one for a bit. Kobayashi Maru, anyone?

Maintaining their confusing tradition in assigning stock/product numbers, this game is #F110

--that is, the tenth in their line of boardgames, this time tagged as a Fantasy title.

On a personal note, while I'm vague on exactly when I got most of the games I'm covering in their sequence of blog posts, this one I can be specific on: I got it at Origins in 1995 (Sunday July 16th), that being the only time I ever went to Origins. It cost me $18.95, probably because all the pieces have been punched and ziplock bagged. Finally, I bought it from Crazy Egor -- not just his booth but Crazy Egor himself. *

*I also bought the original boxed set of Chaosium's MASKS OF NYARLATHOTEP at the same time and place, but it cost me $29.95.  It was worth it. And now, all these years later, I'm coming to the end of playing the adventure.

Gygax's recollection errs in another point also: I believe "Ent" was also dropped, and replaced by "treant" ("tree-ent").

Since Tolkien was the first to apply the word "ent" to talking trees rather than giants in the generic sense (as it's used in Beowulf, for instance), it's probably for the best that TSR changed it.

Can you point us to your other discussion of this title? I'd love to read more. :)

Yes, there are a number of errors in Gygax's account, which is why I flagged it as anecdotal. Perhaps I shd have spelled them out, just to be thorough.

It doesn't occur here, but a particularly irksome filing off of serial numbers change was TSR deciding to misspell mythril as a way of asserting their creative independence.

I'll have to poke about at some point and see when that minor horror was perpetuated.

This was something I touched on as part of my 'Brief Sad History of Tolkien Roleplaying Games', the relevant section of which can be found here (scroll down to section II):

Looking back at it now, it's much briefer than I remembered. Pity. Maybe someone will writeup a full-scale account at some point.