So, just before leaving for Kalamazoo I got a message from my local Barnes & Nobel that an item I'd pre-ordered had come in: RISE OF THE DUNGEON MASTER: GARY GYGAX AND THE CREATION OF D&D by David Kushner (text) and Koren Shadmi (art).  Essentially this is a biography in graphic novel form, with word balloons sometimes representing the biographer's narration or commentary and sometimes the thoughts of the character being shown instead—usually Gygax but for one chapter switching over to Arneson (co-creator, with Gygax, of D&D). Often these bits of text sound like they're answers to a question, which is because many of them were taken from interviews.

Throughout their book Kushner & Shadmi try to be fair to both Gygax and Arneson, admirably so. There are few pure villains in their account (excepting the Blumes, whom they lambaste), which makes their unabashed Tolkien-bashing stands out all the more.

Here's the page in question: 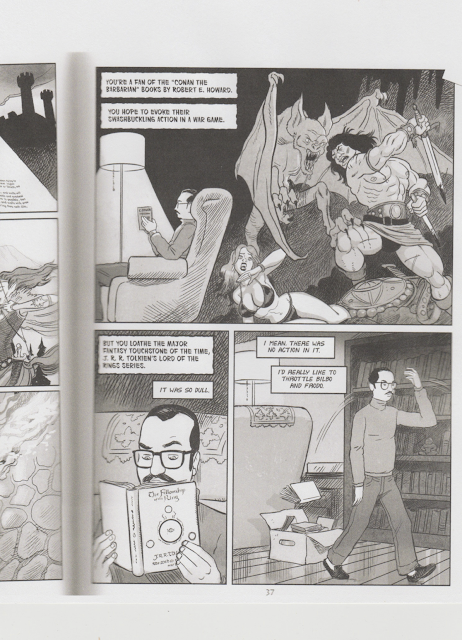 For those who can't read the tiny print, the top half of this page proclaims Gygax's love of Rbt. E. Howard's Conan stories, the bottom half his disdain for Tolkien's work.

— You're a fan of the "Conan the Barbarian" books by Robert E. Howard.

— You hope to evoke their swashbuckling action in a war game.

— But you loathe the major fantasy touchstone of the time, J. R. R. Tolkien's Lord of the Rings series.

(tosses the book into a box of discards)

This mainly raises my hackles because it misrepresents Gygax's relationship with Tolkien's works.

First, the two greatest influences on original D&D where Howard and Tolkien. Tolkien provided the player character races, a goodly proportion of the monsters (I once worked it out to be about a third), and the whole idea of the player-character party, the plural hero. But the world in which those characters adventure, and the kind of adventures they have in them, owe far more to Howard (and Howardesque authors, particularly the great Fritz Leiber).

What's more, Gygax's criticisms of Tolkien began only after Tolkien Enterprises (the movie people) sent TSR a cease-and-desist over their many obvious borrowings (mithril, balrogs, nazgul, hobbits, half-orcs) from Tolkien's work. After that point Gygax sought to distance his game from Tolkien, to deny (in the face of overwhelming evidence) any but the most superficial influence. But the flat dismissal they present here as his initial response goes beyond anything I've ever seen; I'd like to know their source.

Luckily it's possible to enjoy the graphic novel as a whole despite this passage.

I dislike Gygax as a fantasy critic, writer, and game creator, and have ever since is Dragon magazine editorials convinced me his ego far exceeded his talent. So I have an obvious bias against him.

That said, the the same you shared seems to fit very well with the Gygax comments on Tolkien I have seen. In fact, they might be taken, verbatim or nearly so, from the Gygax interview thread on the Dragon's Foot forums. There have an entire forum devoted to Gygax, who commented there often in his later years, IIRC.


I always thought he and Tolkien Enterprises rather deserved each other.

Those would be the Cthulhu Mythos and Melniboean mythology, which both appeared in the first printing of the DEITIES AND DEMIGODS handbook (1980). I happened to pick this up when it came out, since it was the first hardcover to come out after I started playing the game.

Both these two sets of (mostly evil) gods vanished because TSR didn't have permission from the copyright holders. A third fantasy pantheon, the one based on Fritz Leiber's Nehwon (Fafhrd & the Grey Mouser) stories stayed, TSR being on good terms with Leiber (they even published his and FIscher's 'Nehwon' game, albeit in a stripped down simplified form.

I think Gygax had great talent, and we'd never have D&D (or indeed rpgs) had he not been able to take Arneson's idea and turn it into a game others cd learn and play. I'd go so far as to call that genius. And his early follow-up releases contain much that is innovative and ground-breaking. But something went wrong with him in 1981/82, and he never produced a first-class design again.

Luckily the field has attracted lots of talent and others came to the fore as Gygax receded. But it's still sad that he wasn't able to sustain that early brilliance.

Thanks for the link, by the way; I'm glad that at the end Gygax made himself so accessible to his fans.

My problem with Gygax was the arrogance, and the unwillingness to admit his influences or credit his collaborators (like Arneson). But my opinion of him is driven purely by his public comments and persona, I'm sure he was very nice in real life, he was certainly very nice the one time I met him.

I'm embarrassed by that comment above, so many typos!

Yes, the biggest problem I have with Gygax is that he put his name on things other people wrote. Not at first, but as time went on and on he did this more and more. Most notoriously with ORIENTAL ADVENTURES (1985) but also to a degree with MONSTER MANUAL II (1983) and UNEARTHED ARCANA (1985).

But then people who take credit for other people's work is a bit of a thing for me, so that's something I'm totally judgmental on.

And thanks for the link to the graphic-novel review.