So, looking through my file of the original version I played, the one current in Fayetteville Arkansas in 1980-81, I found a bunch of character sheets. Characters tended to die very quickly in this game: no one ever advanced beyond third level because that'd make the DM have to go to a different random encounter chart, so he just killed anybody who was near leveling up (it's pretty obvious when all the monsters bypass the front-line fighters and unerringly focus all their attacks on that one character among the dozen or so in the group).

--to determine Reaction Time, divided Dexterityby 3, with the result subtracted from 8

--to determine Death Level, multiply Constitution by .03 and add 1, then multiply the result by your hits (=hit points).  That this is such a needlessly complicated process says a lot about this iteration of the game in a nutshell -- but I did take away from it a strong belief in some sort of negative hit points system so that there was a brief window during which characters who'd fallen to zero hp or below cd still be brought back.

I'm off tomorrow for Kalamazoo but will try to post some of the character generation material when I get back.

For now, dere's the character sheet: 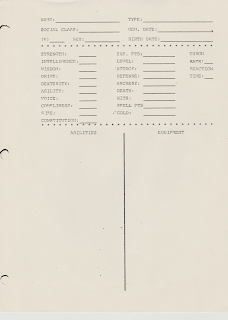 Interesting. I see some definite influence of Warlock, but also differences. The 1975 Warlock added Agility and Size to the 6 basic stats, and the 1978 Complete Warlock retains these. Neither has Drive or Voice, or Comeliness replacing Charisma.

The term "Death Level" appears in the 1975 Warlock (pg 29) with a very close formula - CON x .03 x HP (so, just missing the "+1" you indicated). The 1978 Warlock has this same formula on page 4, but no mention of the term "Death Level" (it might be called this somewhere else in the rules, though). I don't see "Reaction Time" or the formula for it in the sections on initiative.

The character sheet you posted has a line for "Spell Pts", which were a big difference in the magic system of Warlock. It's still semi-Vancian in that a M-U has to memorize spells to fill limited spell slots, but the memorized spells can be cast repeatedly if Spell Points are available, which are equal to hit points plus a bonus for high intelligence.