My Newest Publication (UNDER AN ANGRY STAR)

So my friend, gaming legend Jeff Grubb, was recently a guest of honor at the Lucca  comics and gaming convention near Florence, Italy. And as part of his guestly duties, they asked him to write and run a new adventure specially for the convention. He wrote it, I edited it, and they translated it into Italian and printed it as SOTTO  UNA  STELLA  FURENTE  ("UNDER AN ANGRY STAR"): 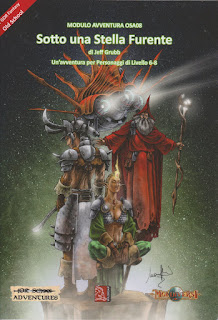 It's quite a fun adventure, and a challenging one combining al-QADIM (a game world Jeff created) with SPELLJAMMER (which Jeff also created) and featuring foes such as the neogi, yak-men, and giff, all of them inventions by Jeff, circa 1989-1994, along with various types of djinn and a few familiar but cleverly disguised monsters. It's been a long time since I edited a D&D project, and I enjoyed this one greatly. In fact, the only down side for me is that the print Italian edition has taken my name off the credits, replacing them with the person who edited the Italian-language edition. Pity, that.

Still, if you love old style D&D and wd like to see a modern exemplar of the craft, I highly recommend this adventure. Oh, and it helps if you read Italian.

P.S.:
One feature that shows a nice 'old school' touch on the part of the folks who thought this up and carried it off is that this module has a designator, just like in the glory days of G1, X2, S4, and I6.

These designators were much loved by gamers, who used them as a kind of in-the-know shorthand, but baffled TSR's marketing department, which eventually put the kabosh on them.*

In this case the code is OSA08, which I take to mean Old School Adventure 8. This is confirmed by a slash in the upper left corner with the mixed English/Italian words "Per GDR Fantasy / Old School". And on the back cover are shown the full front covers of the first six in this series (of which, I noted, Jeff's is the 8th), including modules by Zeb Cook ("L'Ultima Battaglia di Re Aemon"), Bill Slavicsek ("La Taverna Ubiqua"), and Douglas Niles ("If Flagello di Giltshire").
--JDR


*I went ahead and assigned them ones for use in Games Library, right up to the end of Second Edition.


PPS: Here's the back cover of Jeff's module, for those who are interested in seeing more of the context: 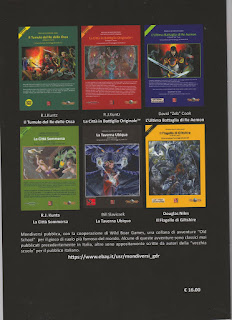 Does Jeff have any plans to publish the English edition?

Man, you should upload the English version on the DMs Guild. Congrats for the material.


Dear Unknown: it wd be great if it were available, but I don't have any right to circulate it. I think that exclusivity is part of the added attraction for the folks who pick up one of the v. limited print run at the con itself.