With the adoption of the oddly named big brown tabby OREO on Friday the 8th (yay for Oreo) and poor little TAZZ being rushed back to the shelter, we're now down to just two cats in the cat-room. Which is just as well, since both little torbie HOPE and black cat KABOODLES are solitaires who prefer to be only cats. They can share a room this size by ignoring each other's presence, but there's no comradery between them.

E&E had both cats in a good mood when I arrived, relaxed but attentive in their respective cages. Both have health issues: Hope's boney lump near her ribs (not a dangerous condition, just a little alarming to someone who picks her up without knowing about it)* and Kaboodle's little tumor on his forehead.

Since I'd heard in one of last week's reports that Hope had actually gone for a walk and done pretty well, I took her out for what turned out to be a good twenty minutes or more on the leash. While she's not a natural walker like Oreo looked likely to be (being confident and curious), she did well. She reacted strongly to some (mid-sized, active) dogs and mostly ignored others (big, quiet).

E&E shared a warning that Kaboodles looks likely to be a door-dasher, and that this morning he'd actually made it out and over towards the water tanks before being retrieved (with thanks to the PetsMart employee who helped). So I tried him on the leash, but he got spooked early on and it took some doing to get him back in the cat-room. I'd recommend his walks be when there are two volunteers so it's quick and easy to open the door and get him back inside if need be.

Sad news about poor little TAZZ being strickened with Calqui (a viral cat-virus) and rushed back to the shelter for treatment. This is only the third time I've ever seen it: once back in the Tukwila cat room and once here in Renton. I feel bad not to have spotted the warning signs: I had actually wondered if she had calqui but ruled it out after seeing her last Wednesday, since she didn't have the drooling that's been so striking a feature of it both of the other times I'd seen it. Even though obviously not feeling well she welcomed attention, especially gentle petting. It was clear that she wanted to eat but only able to get down canned pate made into a kind of meat-paste slurry (which she came back to several times over three hours).

Question: we had a slim sleek black cat named Kaboodle ('My Pal Kaboodle') in the Tukwila adoption room who loved to climb up in the cabinet and bury himself under the cat-blankets. It says on our newcomer's background information that he's a Return. Is this the same Kaboodle?

*our cat Rigby had something similar, which our vet diagnosed as a separated sternum, and it never distressed her or prevented her from being a mighty leaper.

I didn't get last week's session at the cat-room written up, but here's some Sketch-notes for a cat-room report for the previous week

Bonded pair James (Picasso) & Jesse (Leonardo) and also grey torbie EJ had all been adopted during the previous week, leaving just three cats in residence:  HOPE and OREO and TAZZ.
All three were glad to see me and greeted me with friendly mews. Wet food went down well with all three.
Big boy OREO came out right away. He had a nice long walk and picked up on the rules quickly.
HOPE stayed in till lifted out, then napped happily on the cat-stand. It was only when I pick her up that realize what a tiny little thing she is (half Oreo's weight).
TAZZ was not feeling well, as several people had pointed out. She wasn't grooming herself very well and while interested in canned food wdn't or cdn't eat it till mixed with water and made soupy. She felt about the same weight as Hope (seven pounds) rather than the almost ten pounds on her record sheet.  She knows her name and likes to hear it.

PetsMart employees expressed concern about Tazz's nose; good to know they're keeping an eye on the cats when we're not there. 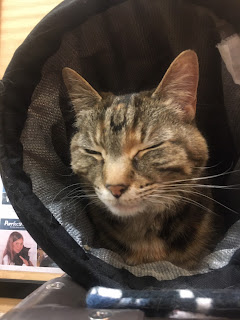 Tazz, very sweet but not feeling at her best. 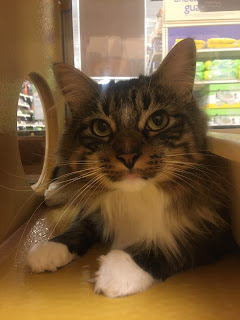 Oreo in all his majesty. 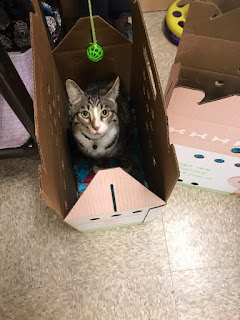 Jesse happy to go in the carrier to his new home 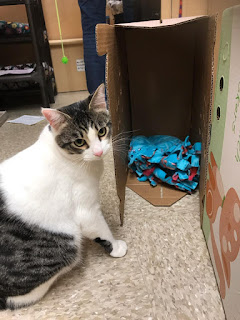