The addition of three newcomers to our bonded pair already in residence brings our total in the cat room up to five cats: KINTA, TINA, LEO DUCATI, TWIX, and BABY RUTH 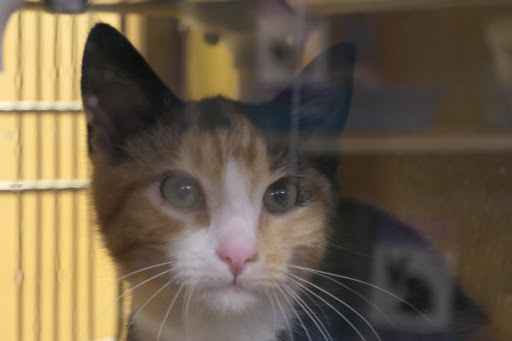 Baby Ruth lights up the room.
Since TINA objects strongly to other cats coming into what she considers her space, I had to let the cats out in phases.
First up came the pair of three-month old kittens, ball-of-fire Tortie BABY RUTH and Tabby TWIX, who were adorable. They tried out various games and enjoyed them all. They don’t mind being picked up too much, though the squirming starts if you hold them what they consider too long. They're still very much in the explore everywhere stage.
LEO DUCATI sat quietly in his cage, enjoying a catnip-suffused sachet, until the kittens had to go in their cage and give him a turn at being out. He was so mellow that I took him out for a walk. He did great! — v. self-possessed. He stayed out a long time and wd gladly have stayed out longer.
Finally it was KINTA the Yellow and TINA the Black, time for our semi senior cats. There’s been a good deal of growling and hissing from Tina inside her cage at the uncaged cats passing by, which must have gotten on Kinta’s nerve, since he uncharacteristically hissed at her as they were coming out. He had another long walk and once again did really well. Poor Tina asked for a walk, growled, asked to be petted, hissed, and generally was so worked up by the other cats in her cat-room that I had to pass on walking her. Next time I’ll do her first of all the cats, before she has time to get upset, which has worked well in the past.
We had a lot of lookers and, at the end of my shift, two separate serious inquiries, one for Leo and the other for little Ruth. I gave both would-be adoptees the information on contacting the adoption counsellors. Hope their applications go well.
No health problems that I noted, but we did have someone who brought a great big dog (a huskie or something of that size) and parked right outside the cat room for a minute or two. Everyone but the kittens took it calmly enough: Twix puffed his tail out a bit and came over close to me, while little Ruth took refuge under the cat-tree, from which she happily came back out when the episode was over.
Amused by a conscientious potential adopter who was concerned that the cat’s information sheets said he ‘enjoyed pets’, since he intended to adopt him into what wd be a single-pet home: I reasured him that this meant the cat liked being petted, not that it wd do best in a home with multiple cats.
—John R.