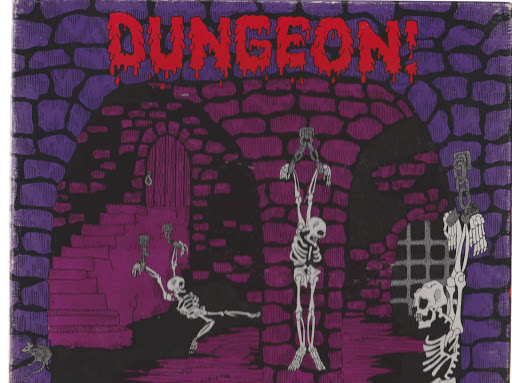 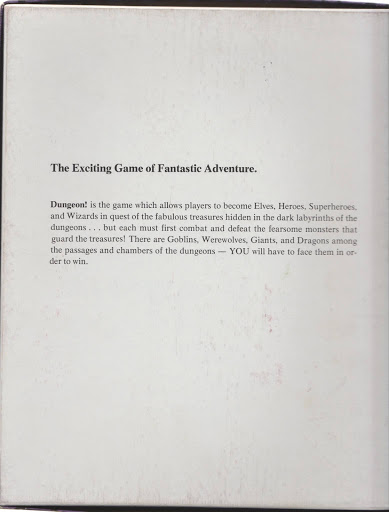 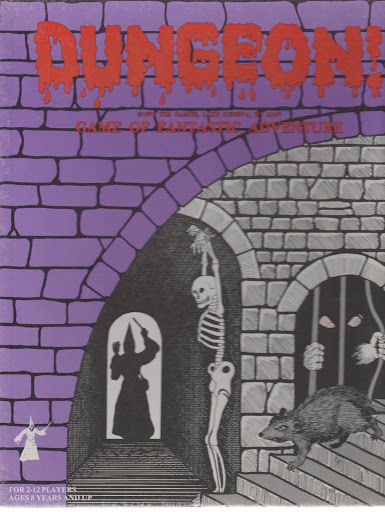 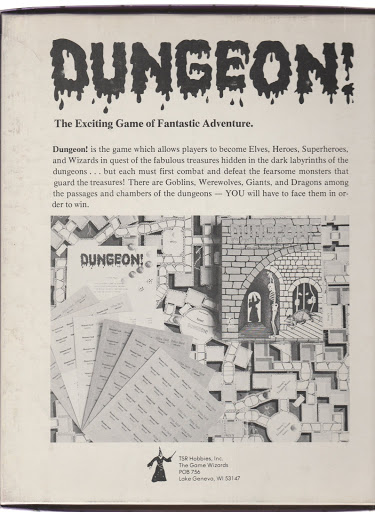 So, perhaps the most successful TSR boardgames of them all was DUNGEON, the creation of Dave Megarry,*  which went through at least six editions, the earliest as far back as 1975 (the year after D&D itself debuted) and the most recent almost forty years later in 2014. Part of its longevity was no doubt due to its conveying the feel of a dungeon crawl. This must have made DUNGEON a godsend to those who wanted to play D&D but cdn't find a DM or reliably put together enough people to form a PC party.

Once again my cache of this particular TSR boardgame turn out to be a misc collection of incomplete copies which fortunately can be combined to make a playable game.

Like a few of the other early bookshelf boardgames from TSR, this one has a horizontal orientation, changed to the standard vertical orientation in the next edition (cf the same shift between the 5th and 6th editions of Fight In The Sky). Most of those box bottoms are blank but this one is an exception, with a paragraph of text pumping the game.

My copy has the game board, which someone has carefully  marked up, apparently to show production what color goes with each space. Also in the box are the cards,  pawns, and dice. There's no rulebook, but there is the following intriguing note in with the other components: 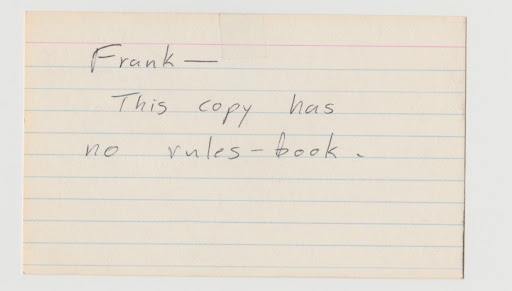 When I showed this to some of the TSR alumni I game with, they not only confirmed that 'Frank' wd have been Frank Mentzer, Gygax's right-hand man, but to all our surprise Steve Winter recognized the handwriting of this note to be his own.

This box may just be a reprint or variant of the above rather than an 'edition', but in any case combining this with the first edition fortunately enables me to fill out a complete playable set. The box lacks the board and playing pieces (pawns) but contains what seems to be a full set of cards (unpunched), the rulebook, and two copies of the double-sided 'Introductory Game' rules. This version of the rules gives the following credits:

Monster and Treasure Card Artwork: Tracy Lesch
Printing: Patch Press, Inc.
NOTE: also in this box is a copy of the rules for the next (third) edition of the game. I'll defer discussion of that till I get to the next section, other than to note that these artists' names are unfamiliar to me; I suspect they were part of the Minnesota gaming contingent rather than belonging to the TSR stable.

Here we have an almost playable game: the board (an actual board this time, replacing the earlier postermap), two copies of the rules (each including the 'Introductory Game' rules sheet), cards, two unpunched sheet of chits, pawns, dice, and a 'Gateway to Adventure' 1981 TSR catalogue.

The credits here are a good deal different, and more closely resemble The Usual Suspects:

The thing that most stands out for this edition is the great Keith Parkinson's  cover. That, and the fact that my copy is water-damaged so that artwork is almost entirely obscured.** In fact my copy of the Third Edition's bottom is stuck to the top of my copy of the Fourth Edition's top.

A pity, really, since here I've got the whole game: playing board, cards, dice, plastic miniatures (replacing the pawns of old), and digest-sized rulebook. Once again the credits have changed quite a bit:

I bought this one at the Barnes & Noble at SouthCenter on Monday April 29th 2013 --i.e., a good while after I'd left TSR/WotC/Hasbro for the last time. I played it with Steve Winter and Luis that same night. I liked it, but since it's since sat on my shelf undisturbed for eight years maybe it's time to let someone else enjoy it. Of them all this one is obviously in the best shape and includes all the components: board, rules, cards, tokens, paper stand-up figures, dice.

The credits once again reflect a generational turn-over of creative staff.

--plus another two dozen or so who affected the product in some way (management, art, playtesting)

-- I don't have this edition, but I'm told it's pretty much the same as 5th edition except with different art, more cartoony in style, no doubt in hopes of attracting a younger audience.

And there it is. If I've left out any editions, let me know.

*TSR seems to have been unsure how to spell Megarry's name. It's given as Megary on the sides of the first edition box, Meggary on the title page of the second edition rules and in this edition's credits, while the third edition title page and credits give Megarry, which seems to be the actual name.  Meggary was part of one of the two great pools of talent TSR drew on in its inception: he belonged to the Minnesota games who came to be associated with Arneson (the other being the Lake Geneva area games who came to be associated with Gygax).

**To cut a long story short: when we moved to the house in Delavan I thought the storage shed's roof didn't leak and stored a lot of games in there.  It did.

Tracy Lesch is also credited in several other early TSR products, including Blackmoor (Supplement II), Eldritch Wizardry (Supplement III), the first edition of Boot Hill, where he did the cover, and the original tournament version of Tomb of Horrors that was reprinted with the deluxe version of Art & Arcana.