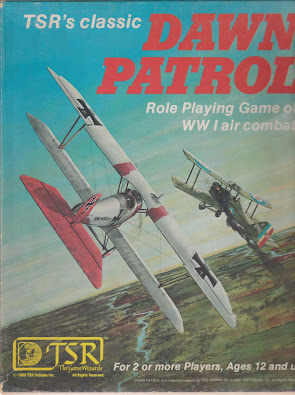 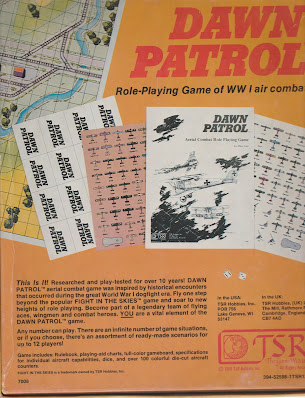 So, by the early eighties TSR had its flagship game (D&D) in addition to their well-known stable of secondary rpgs, all of which went through several editions: BOOT HILL, GAMMA WORLD, GANGBUSTERS, STAR FRONTIERS, and TOP SECRET, soon to be joined by the MARVEL SUPERHERO game.* TSR also published one game that straddled the line between an rpg and a combat game: DAWN PATROL (sku#7008). Like BOOT HILL, this was a shoot-'em-up with an overlay of roleplaying, as is suggested by the description on the box top: DAWN PATROL: Aerial Combat Role Playing Game. This is confirmed by the layout of the rules, which limits the "Role Playing Aspects" section to four pages and moves that out of the 32 page rulebook into the supplementary charts.

What's really interesting about DAWN PATROL is that it had an independent existence before and after TSR. In fact, the game sold by TSR as DAWN PATROL was the 7th edition of a game previously known as FIGHT IN THE SKY.  Inspired by the 1966 movie THE BLUE MAX, game designer Mike Carr** created a World War I flying combat game which has the distinction of being the only game played at every GenCon --or so I was told when I got to play the game in the early '90s, guided through the rules by Skip Williams. I thought this was at GenCon, but having just turned up my character sheet ('rank novice') from a game on Friday January 7th 1994 I think it must have been at Winter Fantasy instead.

For much more about a game from the era of dinosaurs that managed to evolve into a bird, see the FIGHT IN THE SKIES society's website:

For more about my copies of some of the earlier versions, see the next post.

*CONAN, INDIANA JONES, AMAZING ENGINE, BUCK ROGERS, all came later, as did WotC era rpgs like ALTERNITY, DUNE, and WHEEL OF TIME, only one of which (ALTERNITY) managed to establish itself for more than a brief run.

**Otherwise best known as the editor of the AD&D PLAYER'S HANDBOOK, perhaps the seminal book in our industry, and for designing one of the best-known early D&D adventures: B1. In Search of the Unknown.