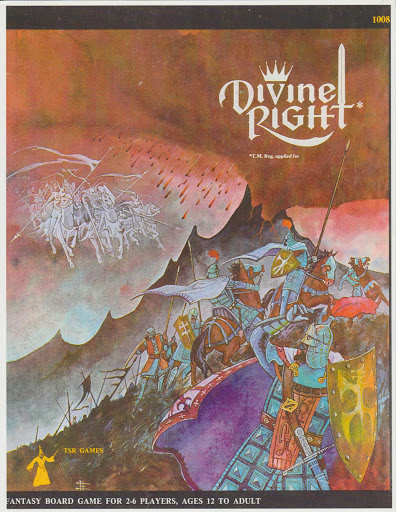 "DIVINE RIGHT is more than just a game.

So, with DIVINE RIGHT (1979, sku#1008) and the remaining two games in this series we leave the obscure, games that for the most part made little splash and sank without a trace, for games that were, in their day, successful and fairly well known.

One such was DIVINE RIGHT, written by the Rhaman brothers, Glenn and Kenneth. I lack a complete set, the only original component in my folder being the (20-page) rulebook. The rest is high-quality color photocopy: Box top, bottom, and sides; map sheet (in 8 1/2 x 11 pieces), cards sheet, counter sheets.

For this I have Brian Thaldorp in the Mail Order Hobby Shop to thank. One of the oddities of this relic of the TSR's Hobby Shop  was that apparently it had been part of their mission statement to be able to replace lost counters or rulebooks or cards or the like from games TSR had done that involved counters and similar small, fiddly, easily lost pieces. For the sake of customer service they kept pieces belonging to games TSR had once published, some of which had long since gone out of print, so that they cd help out anyone who wrote in requesting a replacement chit or card. At some point I borrowed the missing pieces for this game and made good-quality copies of it before returning the originals. I wish I cd say I then took the next step of cutting out all the pieces to make the set playable, but as is the way with collections I never got around to it and it just went on a shelf.

For an enthused tour through the game's virtues, see the following link to a detailed write-up of the game showing a lot of its art and some ancillary material:  clearly a labor of love.

One reason I never attempted to play this old game lies back in my early days in the hobby, when I had just started first reading DRAGON Magazine.  I was greatly put off by a recurring section related to this game called Minarian Legends that ran for something like twenty issues, an apparently endless stream of background material about a game world I didn't play in set in a world I wasn't interested in. But then I've always been put off by reams of backstory: It's as if Tolkien had written all the Appendices and skipped the stories that made them interesting. To put it another way, I'd much rather take part in a conversation that begins 'tell me about yr character' than 'tell me about yr campaign world.'

It's only now, as I'm getting rid of it, that I'm taking a closer look and gaining an appreciation of what looks to have been an interesting game.  In fact it looks very much like what I'd hoped the Lankhmar game wd be that it fell short of: a game full of quirky elements that seem to have stories behind them.* A boardgame that encourages a roleplaying style of play.

My own awareness of DIVINE RIGHT comes mainly from having been at TSR at the time of the game's near revival, circa 1994-95. Once a year, TSR r&d staff wd be asked to each produce an idea for a new game world.** This particular year editor Jon Pickens, who had one of the longest tenures at TSR (1980-2000),  proposed revising the DIVINE RIGHT game as TSR's next D&D game world, it having the advantage of a lot of the worldbuilding already having been established.

After some initial enthusiasm, the idea faltered when it seems like the people who created the game might still have some rights to it. Rather that strike some mutually beneficial agreement, the Powers That Be decreed that TSR wd not use the Rhamans' game, instead instructing R&D (the designers and editors and artists) to come up with a similar but different world. This turned into BIRTHRIGHT --which, ironically, was based on a pre-existing game world, one which designer Rich Baker had created as a background to the fantasy novels he wanted to write.

So in the end DIVINE RIGHT did not take a reappearance (not from TSR anyway; other publishers have revived it more recently).

*I'm told Stafford's WHITE BEAR AND RED MOON shares this feature but have bnever played (or indeed seen) this game.

**The last expression of this tradition wd have been when it was turned inside out in the fan contest that led to the EBERRON campaign setting (2004).