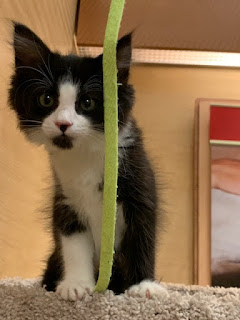 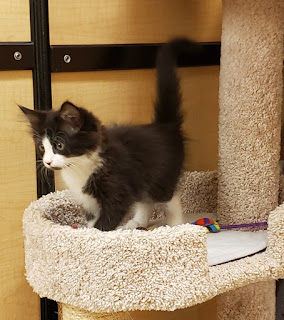 Two pictures of Little Mary, who I expected is all settled into her new home by now. 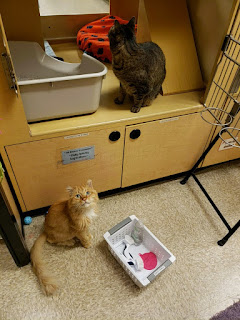 And a final picture of Tim Tiger, trying to think of some way to get a treat.

A lot of activity in the cat-room lately. First LITTLE MARY got herself adopted. Then seven kittens — a set of three (the ‘Friends’ Kittens) and a younger set of four (the‘TMNT’ Kittens) — arrived for a Kitten Event. The three bigger kittens got adopted right away without my ever having seen them, all I think going to the same home. Then bonded pair BLANCHIN and WAFFLES, who’d been here a few weeks ago, returned. So by this time last week (W.7/17) we had sweet puddle-cat DUBLIN, young-mom WAFFLES, overgrown kitten BLANCHIN, and the Four Kittens: LEONARDO, RAPHAEL, DONATELLA, and MICHAELANGLO. Thinking the kittens wd need games I brought in a cardboard box with holes cut in it for kittens to play with. It went down well.
DUBLIN got a walk that was more like a carry, but think it did her some good to get away from the kittens and bonded pair. While very shy and apt to look for cover she seems to have a good start on a mental map of the store. Waffles mostly kept to herself, but Blanchin loved all the games and didn’t mind if the kittens joined in. For her part, Dublin slept on the bins, away from the kitten-activity. A time or two when someone jumped up there she froze, waiting for them to move on — no hiss or slap from her, I’m glad to say. She did like the laser pointer, but not the string game.
July 24th
Since last week Blanchin and Waffles went back to the shelter (does our cleaner make his eyes water?). Two of the four kittens got adopted, and the two remaining siblings are behaving more and more like a bonded pair. Little RAPHAEL (the fluffy all-black one) likes to seize a toy and drag it off. Little LEONARDO (maybe ‘Leonardi’ or just ’Nardi’ wd be better?), the kink-tailed dark torbie likes to chase her toys around. Both especially enjoyed the string game, the bee, and the feather duster. Raphael has the odd habit of nursing on his sister. Odd, but doesn’t seem to be doing any harm (they both purred the whole time).They’ve definitely become a bonded pair.
Dublin had a good long walk (over twenty minutes) that got her away from the kittens and got her moving around some. She’s doing much better on the leash and may turn into one of our good walkers. Afterwards she loved getting attention while stretched out atop the bins: there was a good deal of soft purring (the kind you can feel more than hear). Petting and one-on-one attention turns out to be what Dublin likes best. A bit worrying that she has places where the fur is thin or even missing. Also discovered that she has very long, strong, and sharp back claws.
Since it was a quiet day I let several people in the cat-room, one or two at a time, to see the cats. Made sure that everyone who came in to see the kittens petted Dublin as well.
Tom picked up lots of stuff both last Wednesday and today to go back to the main shelter. The work people put in re-arranging and straightening up the cat-room makes a big difference and is much appreciated.
Hope Tiger’s doing well and that Blanchin and Waffles get better soon.
—John R.