So, here's an example of something turning up unexpectedly. I knew I had a drawing by Dave Sutherland someplace, and I thought it was his picture of Orcus, but it's been misplaced for years.


And now it's turned up. It was among some other misc. TSR art in a box full of calendars --mostly old Tolkien calendars (lots and lots of these) but with some TSR/D&D calendars as well from Lake Geneva days, which must be how they wound up where I found them. Now that they've resurfaced I've put them together with the slender pile of other TSR art so I'll know where it is henceforward. 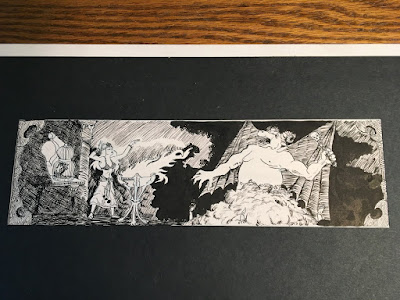 The piece itself is not signed but the matting it came in is. I think Dave, at my request, signed it when I bought it (i.e. the signature dates from 1996, not 1976).

At that night's CTHUHU game I consulted some of my friends from TSR days and one of them, Jeff G., identified it within a matter of minutes as coming from ELDRITCH WIZARDRY, Supplement III to the original three-booklet first edition of D&D. Sure enough, there it is on the bottom of page 45, illustrating the Artifact Queen Ehliss's Marvelous Nightingale.  Since the published version is shrunk down to just 4 1/2 inches by 1 1/4 inch, the reproduction loses a lot of the detail in the cross hatching et al. I can even make out some light blue underdrawing on the original.


As for how I came to have such a thing, that's due to that reprehensible charity auction in December of 1996, when upper management at TSR organized an auction to raise money from their employees for some good cause (I forget what), knowing that they were going to be laying off a significant portion of those employees the end of that week.

From what I can tell, this is one of the two oldest pictures of D&D's Orcus, the other (which I assume predates it) being on page 35 of the same book.


So there it is: unexpected, but welcome. Now to look for a suitable frame and a place to hang it out of the reach of bouncy cats.  It's good to have this as a memento of someone I knew, and liked, and respected.