So,  one of the things that used to fascinate me during my TSR days were the bibliographic ghosts: products that existed only on schedules or in announcements of forthcoming releases but never saw the light of day. Some of these got so far as to be including in the catalogue, often with a brief description, cover art (often prototype), and author listed.  Some were in fact written, edited, and ready to go when The Powers That Be changed their mind one day and cancelled the product (and often the entire line); many more were more ephemeral and existed only as projections. Here's one of the most notorious of TSR's many never-released games: THE CREATURE THAT ATE SHEBOYGAN.

Here's the original (SPI) version of the game. 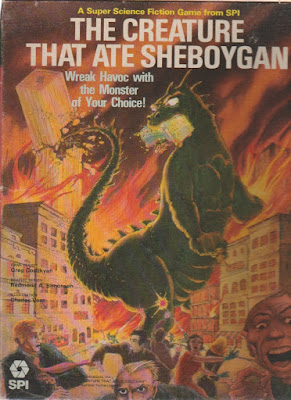 And here's the entry in the 1992 TSR catalogue describing the new version of the game, never to be released: 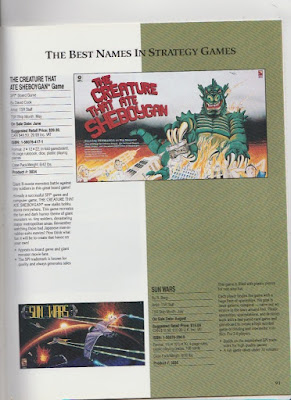 Another benefit of sorting: now that I have a place to put these TSR catalogues, I'm assembling my file of them from where they've been scattered throughout many boxes with the goal of getting them in sequence. Maybe at some point I'll have time to go through and make a listing of at least some of the more interesting entries in them for things that, for whatever reason, disappeared. It's almost like a glimpse into an alternate history.

--John R.
--current reading: four different books, all of which I want to get read but don't seem able to actually make myself sit down and finish reading.