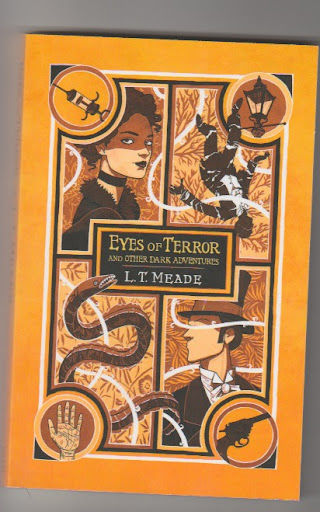 So, a few weeks ago a new collection of weird/suspense stories by L. T. Meade arrived --  an author I'd never heard of before ordering this book. Now that I've read it I'm somewhat disappointed; the stories are readable but uninspired. The best ("The Dead Hand") is a first-person narration by a palmist who is called in to read the palm of a murdered child in order to identify the killer: this one benefits from a sympathetic and appealing narrator. Meade wrote a book's worth of stories about the character (THE ORACLE OF MADDOX STREET, 1904) that might well be worth tracking down. For those interested in ghost-hunters there's A MASTER OF MYSTERIES: THE ADVENTURES OF JOHN BELL -- GHOST EXPOSER (1897).

Historically Meade is more interesting for her career rather than by any literary virtue of her work. A professional writer for venues like THE STRAND (famous as the home of the Sherlock Holmes stories), she more than held her own as a woman thriving in a man's world. She was also amazingly prolific, averaged a bit over 2000 words per day for a total of some 300 books, either novels or short story collections featuring one of her many series heroes or villains (and villainesses), in addition to many non-series stand-alone stories. As if this were not enough, she edited ATALANTA, a literary journal of fiction for girls.

Her productivity was no doubt in part due to her never taking a vacation and to her working method. She dictated each story or novel chapter to a secretary, then revised the resulting typescript.*

Finally, readers of Dorothy L. Sayers' work may be interested to learn that one of Meade's many collaborators whom she relied upon for scientific or medical advice was Rbt Eustace, who later played the same role with Sayers'  THE DOCUMENTS IN THE CASE.  Embarrassingly enough, he gave her inaccurate information which invalidated the crucial bit of evidence that enables that mystery's solution, which is probably why she didn't collaborate with him again.

*this was also the method of Earl Stanley Gardner, who famously took 5 weeks to write each of his Perry Mason books.

current reading: THE BARDS OF BONE PLAIN  by Patricia McKillip

today's song: "Get It Straight" by The Rossington-Collins Band