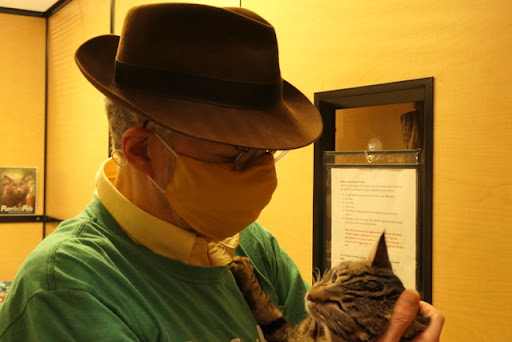 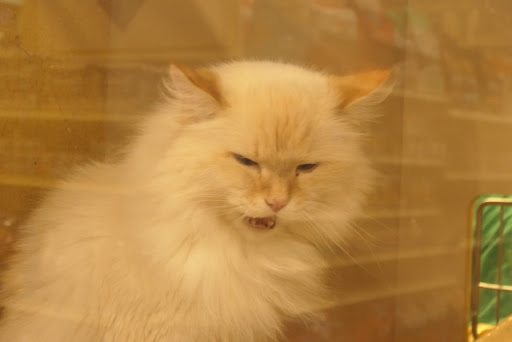 With only three cats in the cat room it was walks for everybody. Unfortunately I was so busy walking I didn't make any notes, hence this light-on-detail report.

CADDIE, our beautiful marbled brown and black cat, had a good forty minutes out walking and made good use of it. She tended to ignore people, walking right past them, but was nonetheless much admired. She knows about doors: discovering the door between the cat room and aquariums she sat down facing it and waited for it to be opened for her (which of course didn’t happen).  She tried to exert moral pressure once she discovered the cat-beds, taking the position that since they were cat-beds and she was a cat, she shd be allowed to climb inside and try them out. But on the whole she did great and I think enjoyed herself.
That left our little sandy lions, one longhaired (Simba) the tother shorthair (Zoey).
SIMBA got half an hour, filled with lots of petting: he walks up to people and invites attention. Between his sunny disposition and beautiful long fur he was much admired. At one point he was in the perfect pose: on the store’s main aisle sitting next to the red ‘Adopt’ sign with an arrow. Unfortunately I couldn’t take a picture and manage the leash at the same time.
ZOEY also got a half-hour or so. She spent the first ten minutes huddled up on the little cabinet thing just outside the cat room door that holds the key. Then she shook herself, jumped down, and started exploring. She went further than either of the other two, and took time to roll over belly-up on the cool tile floor. It was interesting to see that she's okay with dogs so long as dog is well behaved with no barking.
health issue: the bit of what looks to be cat acne on Zoey’s chin has taken the form of a small scab.  Suspect it’d be better to keep an eye on it but otherwise let it heal up on its own.
—John R.