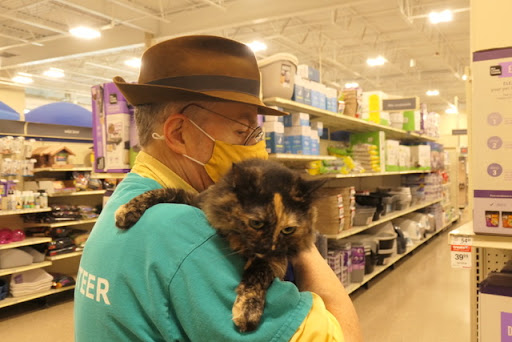 It was good to get back into the Cat Room yesterday. After more than a month away it was a roomful of cats I didn’t know (nine in all: four cats and five kittens). A good day for cat walking.
ARIEL and LUCETO, our pair of beautiful tortoiseshells, had the first walk. Janice helped me get the blue harness on the dark torbie (Luceto?) to start with but afterwards at the end of the walk  I wasn’t able to open the snaps and had to pull the harness off over the cat's head. Luckily she’s  a fairly low-key cat and didn’t object. Next up the orange torbie (Ariel?) had her turn with the collar. She too did very well. Beautiful, beautiful cats.
The other fluffy pair, ZOEY and SIMBA, each had a turn on the leash; like the others two they spent their time exploring all the cat-trees up and down near the cat-room all the way over to the niche between the cat room and the fish. Both pairs had to deal with dogs passing by that got closer than I was comfortable with but fortunately the cats stayed calm and the dogs were well behaved. I’d put that down as ‘wary of dogs’ and recommend they not be adopted to a household with a dog.
The three two-month kittens, Naveen and Ariel and Tiana were shyer than I expected. They were shy of being picked up or of my approaching them but on their own they played and explored and hide and pounced as kittens should. Toys that had a little distance also got the many-toed thumbs up. Naveen had an admirer who wanted to adopt him then and there: I showed her the Q-code and encouraged her to send in a query to Arlington right away, which I think she did.
The two three month kittens: McGhee and Zora, our little black panthers, were independent and full of energy: they loved just about every game that was offered to them. McGhee rode on my shoulders at one point. He got a short walk at the end of things, during which I discovered that he knows the rules but just thinks they don’t apply to him.
Here’s hoping they all find good homes, sooner rather than later.
—John R.
Question: do we really have two cats (of different generations) with the same name? Or as seems more likely have I gotten my notes muddled on this point?
UPDATE
And today came the word that those beautiful affectionate tortoiseshells have been adopted. — JDR 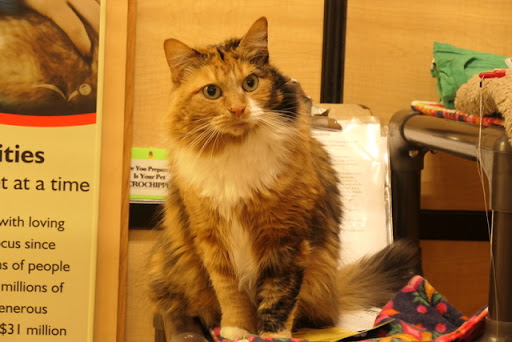