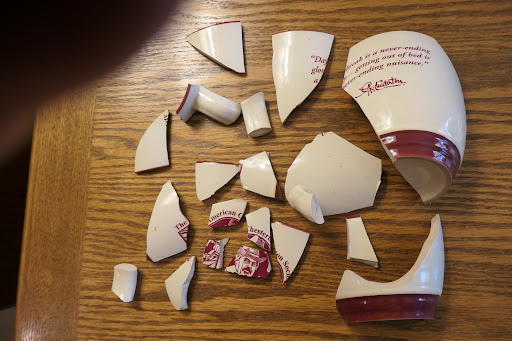 So, several months ago I took the first stab at straightening up my office (which still has a long way to go) and the top drawer of my desk. Last week I made another effort that turned up some things I'd been looking for for quite some time. And last night I gave it another go, aimed at the middle and bottom drawers. Things I turned up include candles and matches, many little scraps of paper, some interesting rocks, a letter from a nun, cat-treats (some of which Tarkus and Tyburn tested to see they were still good), lots of pens and some pencils, and this (see above):

I'm pretty sure I bought this at one of my visits to the Wade Center. I had clearly put this aside in hopes of at some point re-assembling it. But looking at it now, years later, I've concluded it's a lost cause. So, alas, out the door.

The quote on the mug, by the way, reads

"Daybreak is a never-ending

The logo identifies it as coming from The American Chesterson Society, a group I've never belonged to. Based on other things it was found with suggests that it became an x-mug around 2013, so I probably got it a few years before that.

---current reading: "The Bridge of Khazad-dum"

"What an evil fortune!" [muttered Gandalf]

"And I am already weary."