The Cat Room Has Kittens 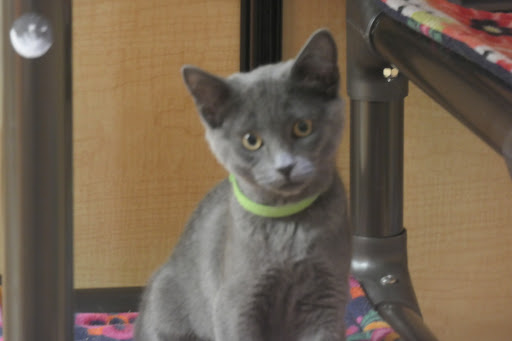 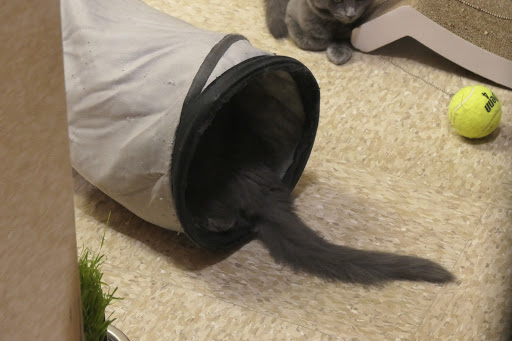 Quite a crowd in the cat room today, even with the two sisters/bonded mother cats pair (Willow and Maple) having already been adopted. We had senior pair TIKA and KINDA, young LEO DECATI,  little ROCKY ROAD (the solitaire kitten, off in a cage of his own), and eight little grey kittens — some light grey, some dark as black; some smooth, some with a bit of fluff; all adorable.

So, a dozen cats in all. First things first, so I got the leash on TIKA and took her out. She didn’t seem to enjoy herself much, but still think the change will do her good in the long run. She mostly sat on the half-high cat stand outside the room and watched everything go by. I also carried her about some. Next came KINDA, who did his usual explorations all over. He got some good comments by staff and customers alike. When he (reluctantly) went back in I put him and his sister back in their cage. Whoever recommended the blanket blocking their vision from the rest of the room was right: both settled down and didn’t do any hissing or growling aimed at the other cats that I heard.
LEO DUCATI had his turn next, and explored even more than Kinda. He turned on the charm and made a big impression on folks he encountered during his explorations. I wanted the kittens to have a turn, so eventually he had to go in and I put him back in his cage, where he settled down.
Then it was Kitten Time. I took them out of their cages one at a time and gave them the run of the place. After that it was kittens everywhere. I liked how they have distinct personalities already in what toy each likes, favorite spots to hide in, tolerance at being petted, and the like. Little Road kept to himself, except when one or two of the grey kittens sought him out to see what game he was playing. He likes to seek out interesting places —say, beneath the cushion atop the bins.
I hope both kittens and senior cats find new homes soon.
Reminder: Next Friday (the 11th) I won’t be able to come in that day for my usual shift.
—John R.