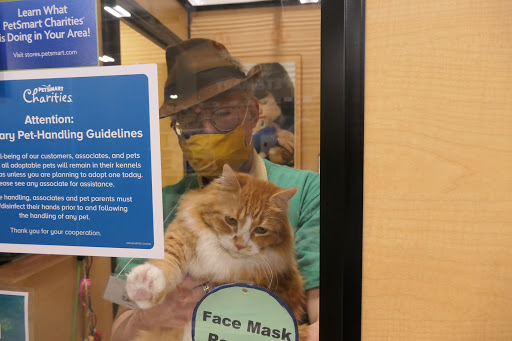 So, back in the cat-room after missing just a week, and I find only one cat I knew, all the rest having been adopted. I’m particularly glad that Tika (?Tina) and Kinda (?Kinta) found their new home at last.  And it’s good to hear, if I understood the messages right, there’s a potential adopter due in tomorrow for little Rocky Road, with another standing by to follow if the first adoptor doesn’t work out. Hope tomorrow is his big lucky day.

It’s hard for a kitten to spend so much time in a cage, so I let little ROCKY ROAD out first thing. He bounded about playing with all sorts of toys and generally having fun. He loved the feather duster, which he carried around as a trophy, and the swishy bug-on-a-stick, and the string game. But his favorite was the litter box that’s usually in the big cage. For some reason, I assume to better accommodate such large cats as Sophie and Sunshine, this had been removed, cleaned, and set upside down on the floor in the inner room. ROCKY discovered he could squeeze under it and had fun for the rest of that first half-hour dragging various toy under or out from under his little turtle shell.
After about half an hour I made him go back in his cage, reluctantly on his part, and let out the bonded kitten pair, BUTTERFINGERS (the little yellow tabby) and SNICKERS (the little brown tabby). After that it was ‘we’re kittens and we’re out’ as they played together, and separately, with me and on their own. They too loved the on-a-stick game, the pingpong games, the claw sharpening cardboards, the string, and the ’turtle’ as a lair. They’re squirmy when picked up but don’t mind a quick pet so long as it doesn’t interfer with their current game.
Then it was the turn of our two solitaires. Both are dilute torbies, both shy about coming out, but both purrmonsters when petted in their cages.  MARLEY is the one who looks like she’s been splattered with black ink about the face ; TIFFANY is a little greyer about the face, front, and paw. Marley let me pet her some, but Tiffany just melted.
Finally came the majestic super-sized SOPHIE and SUNSHINE. Sunshine is the shyer of the two and took longer to warm to me; I had to sit inside her cage and pet her from in there. Sophie by contrast was happy to come out and loved the attention of being petted. Think she’s a good candidate for walking but didn’t get to it this time.
Here’s hoping this roomful of cats quickly find new homes.
—John R.
Posted by John D. Rateliff at 6:14 PM