So, in a discussion Monday night we were talking about the timing of release of various early (mid-seventies) rpgs --that is, the sequence of events of which specific game or game product came out. The RPG Timeline on Wikipedia was surprisingly helpful but of course incomplete.

In the course of the discussion I was reminded of something from the early eighties--after the period we were discussing but still before my time: the TSR staff newsletter, RANDOM EVENTS.

I had recently unearthed my file of an incomplete but substantial run that I have courtesy of Brian Thaldorp, who presided over the Mail Order Hobby Shop (located between the main part of the TSR building and the warehouse). I don't think Brian gets mentioned much in histories of TSR, but he went way back and was happy to reminisce sometimes about personalities from the past. And at one point, since I was (and am) interested in things like that, he loaned me the Hobby Shop's run of this interesting bit of ephemera, which I photocopied before returning the originals to him; it's this set of photocopies I've relocated. 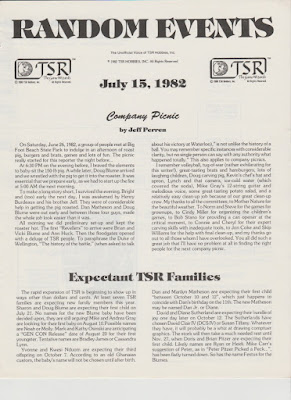 This particular issue is fairly typical. Only four pages long, it features an account of the recent TSR picnic, as well as some gossip about names expectant TSR parents had picked out for their news sons and daughters.

Inside is a two-page spread giving the current Org chart (unfortunately without giving the names of the people who filled all those little boxes).

The last page lists local and area businesses who offer a discount to TSR staff.

Like any newsletter, RANDOM EVENTS was hungry for copy, and so far as contributors went the barrier for entry is disarmingly low:

"If you can put a subject and a verb between a capital and a period,

Random Events wants to hear from you"

--current reading: ADVENTURES OF M. DE MAILLY by David Lindsay, TAM LIN by Pamela Dean, and THE WORLD OF CRITICAL ROLE: THE HISTORY BEHIND THE EPIC FANTASY by Liz Marsham

--today's music: THE ARCHIES GREATEST HITS, the most Mr. Bubbly of all bubblegum rock.