In Praise of Len Lakofka

So, I was sorry to hear of the passing of Len Lakofka. I never met him, but his was one of the big names in the early days of my interest in D&D, the author of not one but two of my all-time favorite adventures: L1. THE SECRET OF BONE HILL (1981) and L2. THE ASSASSIN'S KNOT (1983). 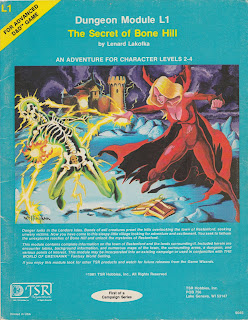 I laid out just why I rate these two adventures so highly in a piece I did years ago back when I was still at WotC. I'm glad to find the piece is still up on the WotC website and can be seen here:

On a more personal note,  THE SECRET OF BONE HILL became my own campaign's home base. Our PCs wound up cleaning out the old castle on Bone Hill, fixed it up, and made it their own home --having discovered that while it was prohibitively expensive to build a castle or keep from scratch, it was far quicker and more within their means to restore a damaged but essentially intact ruin.

Clearly not everybody's cup of tea, then or now. But I still rank it among the greats and think it holds up well, even all these years later.

*fair disclosure: I was one of the judges who proposed titles for the list and voted on the results; I'm even quoted in some of the entries, like the one for L2.

Thank you for sharing that. I hadn't seen that Arness write-up in Children of the Night: Ghosts. It makes so much more sense for her to have been the Baron's half-sister. Clever twist on reusing an old school NPC while leaving her original use intact. :)

And I agree, btw, that most AD&D worlds, if those 'raised' were evil and retain any memories of their afterlife, conversions would be an issue!

Thanks Paul.
Would it surprise you to learn that yours is the first comment or critique I've seen on this point in the twenty-plus years since writing and publishing this?

It does surprise me, a little bit. It seems like an obvious point. But I'm never sure how many people think in terms of philosophy and theology when considering their RPGs, however. At least beyond the teenage angst of the '90s White Wolf crowd or the Nietzschean angst of the Elric/Conan fan boys of the '70s and '80s.

And, sadly, when you added your wonderful Lakofka sequel NPCs to Return to the Keep on the Borderlands and this bit of Children of the Night, the L series was obscure.

Of course, its all obscure today for young gamers. I posted a review on my blog of Kings of War recently, and I mentioned Battlesystem as my fantasy wargame of choice. There was a lot of discussion on the Kings of War Facebook group, and it was amazing how none of them had even heard of Battlesystem.