So, recently I came across some pictures of gamers gaming that I thought I'd share. These were taken in the old Games Library in the TSR building sometime between October 1991, when I came on board, and December 1996, when I walked the plank. Since no one appears in them who came on in 1995-96, my guess is they date from '93-'94.*

If you've never worked for a game company, you may have wondered what people who write and edit rpgs all day long do on their breaks. The answer is they play games for fun between playing games for work.

The Games Library was supposed to be our reference library, containing every rpg, wargame, and boardgame TSR had ever produced (though many, esp. the rarer items, had gone missing), as well as many by other companies: many review copies for DRAGON magazine wound up here. Having worked in a library during my undergraduate days,  I took it on myself to organize the Games Library and to add new TSR products as they came out. But mostly it was our dedicated gaming area, where you cd set up a complicated boardgame and still have it be there the next day, and the next, and the next, for however long it took.** It was also a good place to run short scenarios of rpgs: I remember running GANGBUSTERS and BOOT HILL at  one pt when I was educating myself on old before-my-day TSR rpgs.

Here are the four photos that turned up: 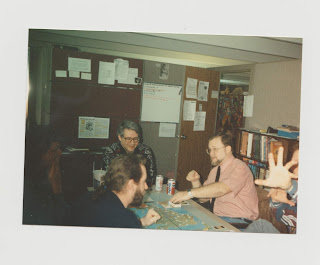 Photo #1, right to left: Bruce Heard, Jon Pickens, Thomas Reid. For the obscured figure to the right, see photo #4 below. In the background between Bruce and Jon is the infamous Whiteboard. 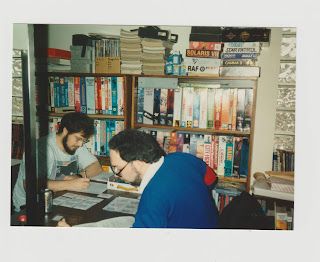 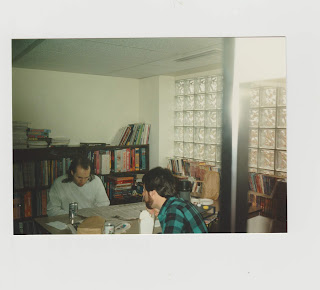 Photo #3: Colin McComb to the left, with I think Bruce Nesbit on the right. 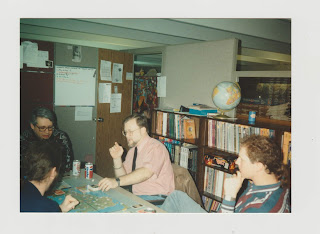 Photo #4, left to right: Thomas Reid, Jon Pickens, Bruce Heard, and Steve Winter. An alternate shot of #1, where this time you can see Steve at the right but not Thomas's face to the left.

I showed these to Steve Winter and Jeff Grubb, who were able to confirm my i.d.s; ironically Steve's face having been the one I cdn't identify on my own. Steve was even able to identify what boardgame they were playing.


*Bill Slavisek, who came in about a year after I did, appears, so that narrows it a bit.

**I remember one BLUE MAX game that ran for weeks.

In photo #1, I also see Bill Connors hidden in the shadows on the far left.

I'm impressed: I hadn't even seen that there was a person there, much less be able to identify him. Looking at it closely now, I think you're right. Thanks for the clarification.