So, there's no way we can replace Hastur. But we can see what we can do about that cat-shaped hole that's opened up in our lives. Originally we were thinking of waiting a few weeks, the first part of which was brightened by Persephone, our friend's cat who came to stay with us for about two weeks while her owner was away.

But no sooner was she gone than the place felt so empty without a cat in it that we started looking for a new cat (or, better yet, a bonded pair to keep each other company). We found a great little cat at a shelter over in Burien, but he was already spoken for. A visit to the local shelter here in Kent let us meet some v. nice cats, but none that seemed to be what we're looking for. So today we drove up to the main Purrfect Pals shelter up in Arlington, where they were having a kitten adoption event. Again we saw some cute cats but none that made us think this is the one. Before we left though the adoption counsellor mentioned that they had another bonded pair in a different building we cd see if we wanted, though they cdn't be adopted until one's injured toe had healed. 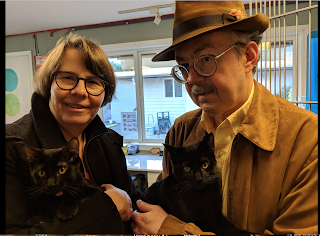 Within seconds of Janice's picking up the little girl cat, she had started purring loudly. Her brother took a little more persuasion, but expressed a perfect willingness to be held and petted. The upshot of which is that they'll be coming home with us as soon as the shelter's vet gives it the all clear that the toe is healing nicely, which cd come as soon as Thursday.

Their names, we're told, were Thumper and Stumper, but we'll be calling them TYBURN (or LADY TYBURN) and TARKUS.