Another RPG Purge and a disgruntled cat 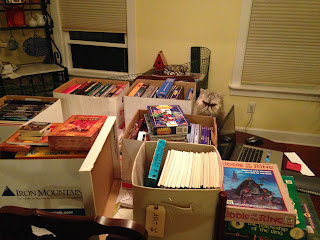 Note the disgruntled cat (not one of ours) as he surveys the boxes of old rpgs.

On the way back from my most recent trip, I was thinking of getting back to work on various projects once we got home. I'd made a stab at straightening my desk before we left and now began to think of ways I could free up some space in my office. My shelves are drowning in books and the area around my desk in piles of papers and stacks of books, which makes finding what I need at any given moment more difficult than it need be. The only solution was to move some stuff out of my office to make room. So I decided, partly inspired by the example of my father-in-law and also of some friends in decluttering, that it was time to let go of a lot of the old rpgs I never play (or, in some case, have never played). This included all of MERP (for which I found a good home) but also other games like JAMES BOND 007 (for which I kept only the boxed set, giving away all the supplements), CHILL (likewise), DOCTOR WHO (likewise), EVERWAY (plus its three supplements), EMPIRE OF THE PETAL THRONE / TEKUMEL,* et al.  The only things I kept everything of from all the games kept in my office were (1) all the AD&D/D&D stuff (of course),** (2) all the CALL OF CTHLUHU, and (3) all the PENDRAGON.

By now being on something of a role, I next tackled the old TSR games on the shelves down in the box room. Aside from the original Marvel Superhero Game (which felt prey to water damage long ago) and the WotC Star Wars game (which I never had any interest in), I had pretty much all the rpgs TSR had put out before and during my time with them. So out the door went AMAZING ENGINE (except for the two that I worked on), all of ALTERNITY (including DARK MATTER), BUCK ROGERS (both IN THE 25TH CENTURY and HIGH ADVENTURE), CONAN (by Zeb Cook!), DUNE, INDIANA JONES (all), DRAGONQUEST, DRAGONLANCE SAGA SYSTEM, MARVEL SAGA SYSTEM, all of d20MODERN, all of STAR FRONTIERS; even BULLWINKLE and POKEMON JR.  The only things I kept were all of GANGBUSTERS, all of BOOT HILL, all of the original TOP SECRET (getting rid TOP SECRET / SI), and the original GAMMA WORLD box and first two modules.  Whew.

All these have now found new homes --- quite a bit of it with a friend whose cat, pictured above, was displeased that his owner's attention was on the new games and not said cat.

Next up, it's time to purge those d20 shelves. Which will take a deal of sorting.

Being both a collector and something of a horder, I hate to see all this go, but it's a good feeling to have more shelves to work with. And it'll be worth it to have what remains be so much more accessible and to have my office in much better shape.


*I kept only the original 1975 EMPIRE OF THE PETAL THRONE boxed set, the much later T.O.M.E. boxed set, and the one JUDGE'S GUILD adventure for EPT (i.e., three out of thirteen items).