So, in the interests of equal time (Poe being both a great prose writer and a great poet), here's the least-known of all Poe's major poems and a great favorite of mine.  It's an early work, written about 1829 when he was about twenty, and one we almost lost, given that Poe never published it during his lifetime
(he wrote it in a friend's book as a sort of extended inscription). I think I may have posted this one before, but if so it's been a while and a good poem bears repeating (and re-reading).

The image is a photograph (daguerreotype). Poe only grew the famous mustache the last five years of his life; before that he'd been cleanshaven, with sideburns. But since he became famous in 1845 (about four years before his death) for writing "The Raven", which was an international hit (he dedicated the English edition to Elizabeth Barrett), and since daguerreotypes were only invented in 1839, most of the pictures we have of him (some seventeen in all) are photos taken from near the end of his life.

Here's the picture, followed by the poem: 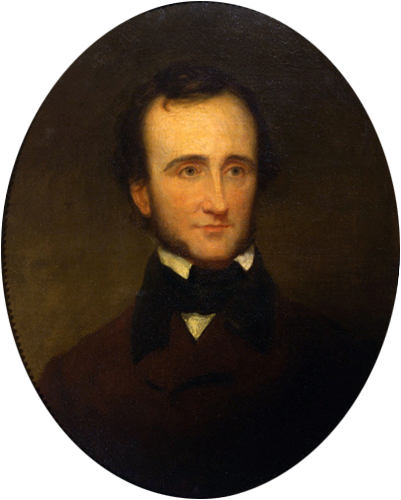 From childhood's hour I have not been
As others were — I have not seen
As others saw — I could not bring
My passions from a common spring —
From the same source I have not taken
My sorrow — I could not awaken
My heart to joy at the same tone —
And all I lov'd — I lov'd alone —
Then — in my childhood — in the dawn
Of a most stormy life — was drawn
From ev'ry depth of good and ill
The mystery which binds me still —
From the torrent, or the fountain —
From the red cliff of the mountain —
From the sun that 'round me roll'd
In its autumn tint of gold —
From the lightning in the sky
As it pass'd me flying by —
From the thunder, and the storm —
And the cloud that took the form
(When the rest of Heaven was blue)
Of a daemon in my view —