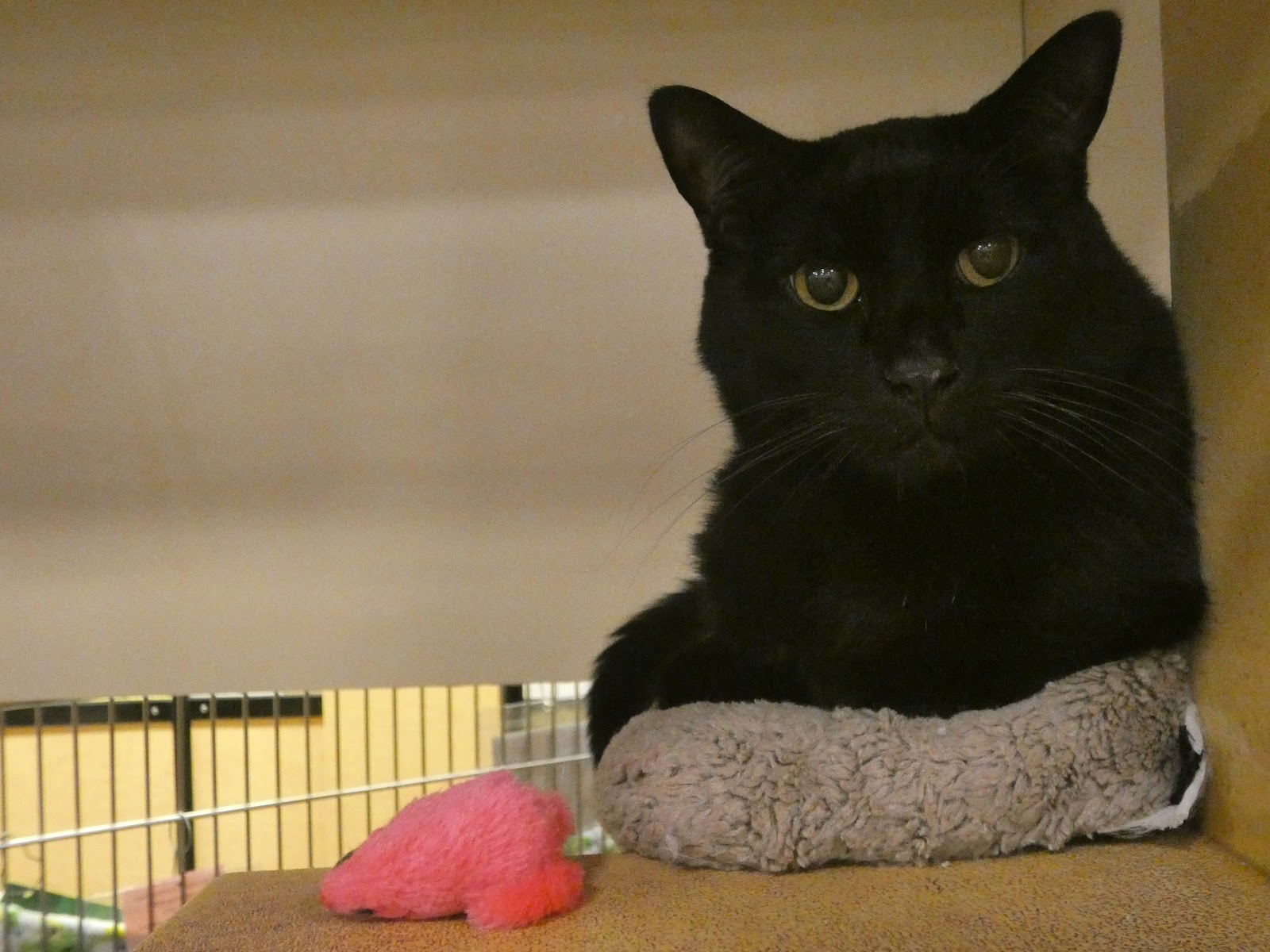 Photo, by Janice, of Mr. Kramer.

Friday was an unusual day in the cat room. Half of it was devoted to walking cats, the other half to socializing. I was so focused on the cats that I didn’t make any notes, so the following is based on my memory two days later.

A fellow volunteer joined me to pick up some hints re. cat-walking, and we experimented with various combinations of harness, leash, and collar. It was mutual, with us learning about the individual cats while the cats learned what was expected of them when out of the room. The result was good, in that we got all five cats out. Some explored and some hunkered down and some cast a hopeful eye on the cat-beds just outside the room, but on the whole I think being out and about did them good.
It helped a lot that we started with Mr. KRAMER, who struck up quite a conversation with me. First I climbed in his cage and got to know him a bit (this was my first time meeting him), then lifted him out, got the leash on, and we were off. He’s the kind to approach people he meets and offer them the chance to pet him, then he’s off again. Back in the room I only saw one prefunctory hiss (at B&B’s double-cage as he was giving the room a quick inspection). Otherwise he seemed happy just to doze.
Next came our sedate semi-seniors BINGO AND BONGO. One of them (Bongo I think) treated the harness as a thunder shirt, and kept plopping down and looking around. They got a good deal of petting as well. Back in the room they wanted some petting but weren’t enthused about games.
BUTTERS and HOUDIN were unsure about the walking but decided to trust us and did fairly well.  Back in the room they were happy enough to be petted and didn’t much mind being picked up.  What they liked best were games.  The string game seemed their favorite, but they can make a toy out of just about anything. Affectionate but more interest in chasing and pouncing and dragging a toy away than petting. Two great little cats.
And that’s about it. The time just flew —giving the five cats each a walk took up a whole hour. And it’s so much easier to get a cat being walked back into the room if there are two people: one to keep a hand on the cat and the other to deal with the door and lock.
Many thanks to my fellow volunteer for coming and having a practice run for walking some of those cats.
--John R
Posted by John D. Rateliff at 8:59 PM