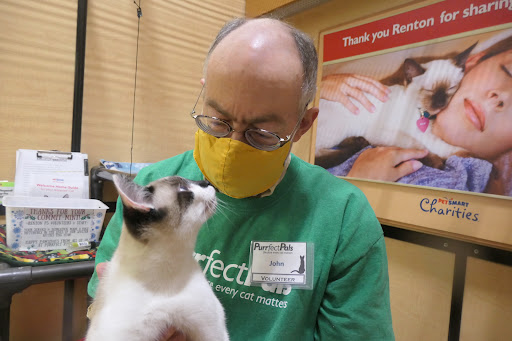 What an amazing end of the year it’s been, with so many cats finding new homes in October, November, and now December. I’d no sooner gotten to know Shy VIOLET and sweet PARIS (a tree cat if ever I saw one) than both were in new homes (hurray!) and six new cats arrived (if I’ve got my notes right): CLYDE* and STELLA, SCORPIO and TAURUS (11 month old little black panthers), BONNY (four month old a little grey tabby) and her partner CASANOVA with his remarkable markings (I’d never seen a Snowshoe before).
Of these, not only did Clyde get adopted before I’d even seen him, but the same thing happened with Stella. When I arrived for my Friday midday shift at noon to find one of my fellow volunteers  who’d just completed Stella’s adoption. And at the end of the same shift at two o’clock another volunteer came to take care of the adoptions of SCORPIO and TAURUS.
In between I’d let the younger kittens out first (for about an hour), then the older kittens for their turn. I was surprised that the little black panthers were ready to go back into the residences after a half hour or so. So the smaller kittens (Casanova and Bonny) had another turn, which they appreciated. They loved dashing about chasing toys; Casanova in particular likes to drag the toy away. I offered each of the four little cats a walk but got firm refusals all round. I did manage to get the leash on each one for about five minutes or so within the room, thinking it might be a first step towards actual walks to come, kind of like a bike with training wheels. In-between playing with kittens I cleaned and sanitized what I assume had been Stella’s cube.
Lots of people stopping by to look at the cats, who were happy to be on display in the windows.
Now if only our two remaining kittens can find a home over the next week or so what a great finish on the year it’ll be.
—John R.
*my cat Parker, famous (notorious) as 'The Cat Who Bit People', was originally named 'Clyde'; I had renamed him PARKER before finishing the ride home.
Posted by John D. Rateliff at 11:24 AM