Poor MAESTRO having gone back up to Arlington over concerns about his not eating (and throwing up much of what he did eat), with five new cats arriving at the same time, once again we had a whole new roomful of cats.
Of these, two (CINNAMON BUN and ELLIOT) have already been adopted. Sorry not to have met them, but good for them finding new homes so quickly.
That just left three cats by mid-today, with some potential adopters already in the works.
First there’s AUTUMN SPICE , a beautiful, gentle, and lovable Tortoiseshell with lots of long soft fur, orange and black swirled together, more orange than black. She doesn’t like to be picked up and is not a fan of being held but she loves, loves, loves to be petted.  I sat down on the bench and she joined me, even climbing in my lap for part of the time. She let me comb her fur, so that’s what we spent most of her time out of her cage doing.  Decided not to walk her, since I didn’t think I’d be able to pick her up and get her back into the cat room if something upset her.
Finally, she’s a talker. She mews in greeting, when she wants to get your attention, when she wants you to do something, and the like. It’s not chatter so much as conversation. It’s hard for a senior cat to find a new home at age fourteen; here’s hoping she’s soon sharing a couch with her new people.
P.S.: She likes catnip but wasn’t much interested in games, preferring being groomed instead.
ATLAS & MARLY, the bonded pair, and six-month-old former strays, subsequently prison cats. Atlas is the lynx point tabby and much the shyer of the two. Neither of them likes to be picked up or held, but Atlas has a harder time of it.
Marly is the yellow tabby — shy but willing to sneak out several times and explore the place. He loves games, though he’s currently too shy to throw himself into them whole-heartedly. He likes to purr, and his purr helps calm down his partner, Atlas.
I can’t get Atlas to come out at all, so I petted him in their cage and set up a blanket where he cd get some privacy yet it was easy to see him from outside the cat-room looking in. It took a while, but eventually he joined into a game (the stick game) and showed he’s still kittenish when not overwhelmed by a strange new place.
—John R. 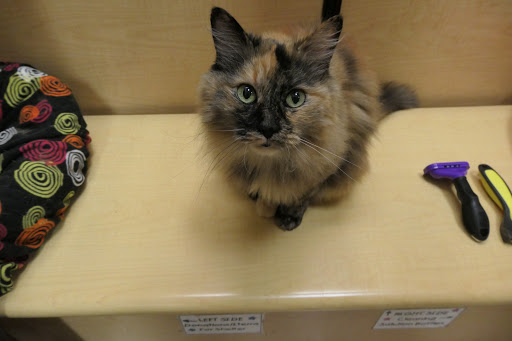