So, the box I starting sorting through last week turned out to contain relics from GenCon 1994, the most interesting of which was the following table (posted in the Games Library)*
predicting which of TSR's designers and editors wd snap first from the strain of working on their current projects while at the same time getting everything ready for the panels and playtests they'd be doing at MECCA and all the madness that wd ensue. The two depicted as under the most pressure were Michele Carter (who annotated her own entry: "Sick, a Flint CD project, and GenCon--I'm much closer than 'even odds'") and Julia Martin ("Favorite in a crowded field"). The two voted most stable were Skip Williams ("Former RPGA--this looks like a vacation next to that") and Jon Pickens ("Chosen 'individual most likely to turn out the lights at TSR' for 5 years running"). I'm in there too ("It's always the quiet ones"). 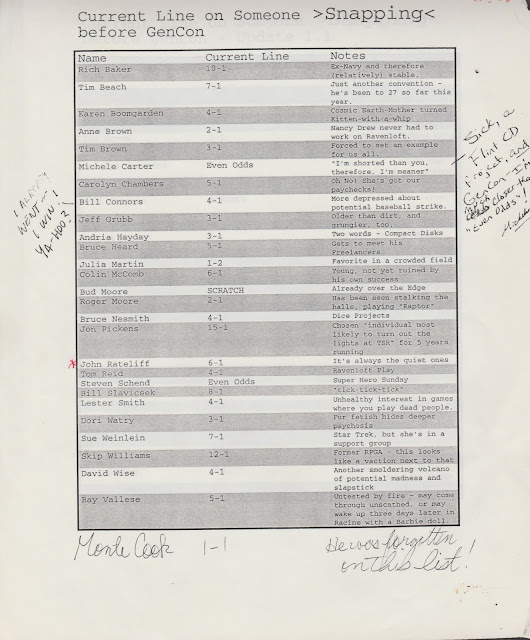 Quite aside from all the in-jokes, this is a nice listing off all the folks working on rpgs at the time, with two ringers: Carolyn Chambers, who was one of the Olympians (i.e. executives) with whom we had limited contact (their offices were in a different part of the building and we were encouraged not to go that way), and "Bud Moore", a blow-up life-sized doll, the subject of many tacky jokes.