So, for a long time I wondered whether there were any Tolkien pianos left in the world. We knew that Tolkien's ancestors were known for making pianos and, earlier, clocks (and, at least one of them, for writing music). But that was more than a century ago: did any of those old pianos survive? Eventually I heard that yes, at least one had made it down through the years, still in the possession of a member of the family.

And now it appears that total of known surviving Tolkien Pianos has increased to two. I was skimming through the latest issue of AMON HEN when I saw the following notice about someone who had a Tolkien piano, complete with stool, that'd been in his family since 1919, having been made about thirty years before that. And, in an act of stunning generosity,  he wanted to give it away to a good home. Here's his picture of the piano in question: much less utilitarian and more elegant than I had expected. 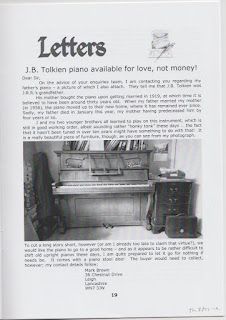 And here's hoping it finds a good home.

John, I hope you alredy know my texts on J. R. R. Tolkien's ancestors from the 17th-19th centuries:

This is who is who among the ancestors of J. R. R. Tolkien in Prussia, Danzig (Gdańsk) and London.

We have one! I'd love to know more about them. Ours is much much more elgant than the one in the photo. Silk backing behind fretwork etc. Its very grand.