So, two weeks ago today we went to the Boeing Museum of Flight to look at their APOLLO exhibit  ( http://www.museumofflight.org/Exhibits/Apollo ).

It you're at all interested in the space program, and especially if you remember the Apollo moon missions from yr childhood, I highly recommend you try to get to this.  Though it'll be hard: general admission tickets had already sold out and we were only able to get in by joining a museum membership. It was well worth it, and we had time beforehand to look over some of their impressive permanent exhibits, such as the one tracing Amelia Earhart's route.*

In the space program exhibit they've got everything from a cosmonaut's suit (pink) and re-entry capsule (which I mistook for an old-fashioned bathysphere) to a box they brought back moon rocks in (including one of the rocks, in a case next to a photo of it resting on the surface of the moon),** a moon-buggy astronauts used to train in, the console used by mission control (a v. familiar sight to anyone who'd seen the live footage of launches), and much more. Particularly impressive were the pieces of a Saturn V, still the biggest rocket ever built, the culmination of Van Braun and Goddard's work:*** part of it unused, having been intended to launch either Apollo XVIII or XIX, both missions having been cancelled when the space program scaled way back. The other pieces are the burned and scared remains from an actual launch, some of the huge bits that were ejected on the way up and fell off once the first stage of the launch was over, now retrieved from two and a half miles under the ocean by a Jeff Bezos funded project a few years back


Here's a picture of me next to the Apollo 11 command module, the only part to reach the moon and return (as opposed to the lunar module, which stayed behind on the surface of the moon, and the service module, which burned up in the atmosphere during landing). It's surprisingly large when you see it and yet surprisingly small when you think of fitting three men inside. 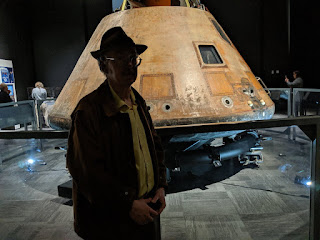 All in all a good exhibit and I'm glad we made it to it. Though to my mild disappointment they weren't selling those little paper some-assembly-required models of the Apollo 11 lunar module that they gave away at the time at Esso stations. I wonder if any of those are left out there somewhere.

--John R.
current reading: all kinds of snippets re. JRRT for the paper I'm working on (an expansion and revision of my Kalamazoo piece).
current viewing: the Pratchett/Gaiman GOOD OMENS miniseries.


*we had to pass this time on what are to me the most interesting planes staged in the most depressing area: World War I planes (which are great) mounted over a recreating of a Western Front trench (which is harrowing). Luckily, having a museum membership means we're likely to come back several times over the next year or so to poke about more.

**turns out they were v. concerned about contamination -- not that the moon rocks contained some kind of space-virus, a la THE ANDROMEDA STRAIN, but that earth's biosphere wd quickly overwhelm any trace of non-Earth life on or in the moon rock.

***they also have a reconstructed V2 , not as part of this exhibit but on permanent display.

I envy you. My knowledge of the Apollo missions comprised mostly of anything printed in the National Geographic, including a flimsy 45rpm record that had to be popped out of a page of the magazine and laid on top of a vinyl record on the turntable to keep it flat.

I did later have a children's Apollo activity pack of documents and pictures that included a cardboard template of the various spacecraft parts. As I remember it, the Command and Service modules remained in orbit around the moon, while the Lunar Excursion (sounds like a Bank Holiday trip) Module landed. Later, the Lunar Ascent Module returned to orbit, leaving the Lunar Descent Module on the moon, but was itself left behind in lunar orbit (presumably to crash later) while the astronauts returned to earth in the Command Module, still linked to the Service Module. I don't think that anything that landed on the moon (barring astronauts and commemorative covers) returned to earth, not even the lunar spacesuits, which were left in the Lunar Ascent Module.

Retraction: The basic Apollo space suits were worn for the whole mission, and therefore did return to earth with the astronauts. What was left behind were the overshoes and the life-support backpack, left on the moon to save take-off weight.
My apologies for typing before checking.