So, we had a plumber in last week, which meant we had to move about fifty boxes to the other side of the box room so he could open up the wall and get at the pipes that were misbehaving. This being too good an opportunity to miss, we sorted through several boxes that have lain undisturbed for a long while now, throwing away a good portion of what was in them but plucking out some items of interest, at least to me.

Case in point: a seating chart at Wizards of the Coast, showing who was in which cube. This was clearly in the old building on Lind, not the current location.

This page is of added interest because I marked it up at the time to show who got laid off in the June through July 2001 layoffs, including myself.  I can date it from indicators like the absence here of Jon Pickens, who had been the longest serving department member when he left in the previous round (December 2000), and the presence of Charles Ryan, who came up to join us in Seattle at that point (the only member of Last Unicorn to do so when WotC shut down the offsite autonomous branch). And it's distinct from the next round (which came sometime in 2002, I think), which took out some not marked here, like Dale Donovan.

Not all of the people marked here as leaving the department left the company. Some left on their own dime, like (I think) Thomas Reid, who wanted to concentrate on his novels. Some, like Dave Eckelberry and Jennifer Clarke Wilkes transferred to other departments, like Cards R&D or boardgames. And some, like me and Duane Maxwell, Jason Carl and Owen Stephens, Steve Miller et al, were simply out of luck.

At any rate, a curious historical relic wh. I thought I'd share, since one thing WOTc had in common with TSR was that its inner workings were entirely oblique, so that the outside world was usually completely unaware of who was in-house and who was out-of-house/freelance, and who did what on what project. This gradually changed as the internet made it far easier to keep track of such things, but even as late as when I left for the last time in December 2005 most people who followed the game closely still had relatively little idea of the department as a whole, and who did what on what projects. 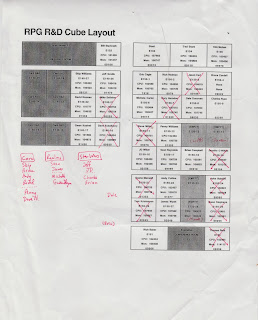