So, I wrote up my cat report last week but then got busy and didn't post it. So here it is, followed by this week's week-in-cats. --JDR

[WEDN. JUNE 21st]
Just three cats this morning: AVERY and MINERVA (Harvey) and TABITHA. They pretty much got along (not without some hissing when they felt it called for), even when two cats wound up in the same cage from time to time. All had used their litter boxes, but none was interested in a spoonful of wet. One did lick a little of the sauce off, but that was it.

To my surprise, Minerva came right out. I’d brought in a box for cats to jump in and a little bag of catnip to sniff, which she discovered while I was still cleaning and seemed to thoroughly approve of.  Also to my surprise she scratched at the door wanting to go for a walk. And once out she did a lot of walking, down past the fish tanks and right up to the front door. When picked up and carried away to a different spot, she worked her way around to the door from a different direction, and then did it yet again. She clearly has her mental map of the store and knows where she wants to go (out). It was a long walk and she did really well on it.
Avery was a little shy about walking until I took her over to the training room, where she prowled about with great satisfaction, purring when I talked to her (she likes the sound of her name). She behaved very differently when in the inner or outer room (friendly, relaxed) vs. when in her cage (tended to swat at hand reaching towards her). I stayed an extra half-hour because she had a visitor who came down from Lynnwood to spend some time with her.

Tabitha doesn’t like walks. She’ll let herself be carried all around, but after a while the mewing starts and it’s time to come back in. She likes to do her exploring in the cat-room, and loves pouncing games. A guy met her during her walk who had a lot of questions about her and took her picture before he left. Think he’s interested but is about to go on a trip to Hawaii; we might see him again when he’s back if Tabitha is still with us then.
On the whole, a fairly quiet morning in the cat room.
health concerns: Avery got in various dirt boxes several times and dug around but only did any business once or twice.
Minerva/Harvey does have a little trouble jumping up and seems to favor her back legs. But she had no problem walking. Moving her to the bottom row was a good idea.
—John R.

[WEDN. JUNE 28th]
Back on my normal (11-to-1) routine today, last week having been the last for me taking the (9-to-11) morning cleaning shift, and so had lots of time to socialize the cats.  When I got there Emma and Lisa already had them out and well taken care of, so I plunged right in with TABITHA. She did the same anxious mew mew mew as last week for about half of the walking time, then she got distracted and interested, and forgot to mew while she did some exploring. I took her down to the training room at the far end of the store and she relaxed in there, treating it kind of like a big, big cage.
AVERY was reluctant to let me put the leash on; once out I took her straight to the training room, where she relaxed and did a lot of prancing about, rubbing legs, and asking to be petted. When it was time to leave the room she navigated her way back to the cat room without any trouble, so looks like her mental map now includes pretty much the whole store.

As for CHESTER, what a beautiful, friendly, charismatic cat. Quite the charmer. Hard to believe someone would give him up for adoption; don’t think it’ll be long before he’s in a new home. He’s clearly been out on a leash before and did really well. He’s the kind of cat who walks up to people and asks for attention, which they were happy to give him. Oddly enough, when towards the end of my shift I decided to give him a second short walk, he kicked up a terrible fuss at the idea of having the leash on again so I gave up the idea.
Avery went into her cage after her walk and pretty much stayed there, hissing and swatting at my occasional offers to pet her — she’s clearly adjusting to her plans to become boss-cat of the room having collapsed with the arrival of Chester. Think she’ll settle down over the next few days.  Tabitha (‘Queen of all String Games’) demanded games, and Chester wanted to join in. She’s perfectly okay with getting close to him, but he’s wary of letting her close and sometimes hisses her back. I brought in a paper bag, which they all ignored. By contrast, the cat-nip spray was a big hit (except with Avery, who thought it might be a spray-the-cat water-bottle). Both Tabitha and Chester loved the string game and the mouse-on-a-stick game (I left that behind as a gift). In addition, Chester showed great enthusiasm for the feather-duster. In short, both cats got to exercise their inner predator without anyone getting hurt.
Speaking of which, I feel bad for Minerva. AND the person she bit. Twice!  She had been so much better last week getting out and about on the leash that I hoped she was opening up. It’s hard to be a senior cat in a cage. Hope she does better at the next cat-room.
And while it’s too bad not to get to meet Kit/Luna — never seen whiskers that long on a cat before — I’m glad she got re-united with her owner so quickly. Can we have the whole story on that someday?
no health issues,  but happy to report a donation from a PetsMart customer; I pinned this to the calendar.
And that’s it for another week.
—John R. 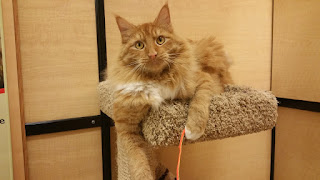 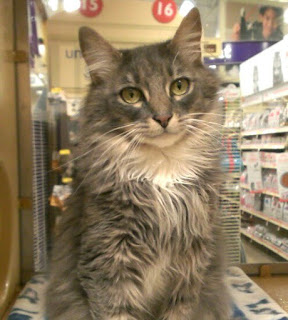 UPDATE Wednesday evening
I just have to add that upon returning home I found our cat FEANOR thinking he was due a walk himself, so I obliged. He doesn't go far these days, just around the back porch and into the side yard, but he enjoys smelling outdoors things,  watching birds or bunnies, and eating some grass. It was his day for seeing other animals up close -- first our next-door neighbor's dog Sidney (whom he knows pretty well, they having stared at each other a lot from our respective balconies) and then The Grey Cat, a neighborhood cat who seems fascinated with Feanor and comes up and watches him sometimes when he's out. This time he got to within about a cat's length of him whereupon Feanor mewed a time or two. Then they went their separate ways. Hastur, meanwhile, was upstairs on the desk in a box; she only ever wants to go out when it's getting dark (which is a bad time for me).