Great news that Mr. BOSCO found a new home. He was a charismatic fellow and I have no doubt he’s already won the hearts of his new people.
That left us with four cats in the cat-room: AVERY, MINERVA, TONKS, and TABITHA.
Everyone came out right away except Minerva, who enjoyed games (laser pointer) and petting in her cage. She’ll let you know if she wants you to stop, with a slap if needed to drive home the message. At one point we had quite a ruckus when Tonks jumped into Minerva’s cage, who proceeded to give her the what-for. There was much hissing and much swatting but after Tonks had gotten back out of there she didn’t have a scratch on her — it was intense but unarmed, so to speak. Minerva is the only one who didn’t get a walk -- even though I got her out enjoying herself on one of the cat-stands at one point, she was back in the cage when walk-time came around and I thought digging her out of the cage a second time wd just rile her up and start off the walk on a sour note. I’ll have to remember to start with her next time.
Avery was moody, although I think glad to be back in the big cage now that Bosco's adoption had freed that up again. She spent most of the morning in the outer room, keeping an eye on the other cats and occasionally joining in a game. She had a good walk over in the training room, purring all the time. Her fur’s finally grown out, just a beautiful as expected. Think maybe she needs more one-on-one attention.
Tabitha was charming. She came out right away and curled up on the bench, purring whenever anyone gave her some attention. I can finally tell her from Minerva! (Minerva has an all-black nose). She enjoyed games, but she’s a lazy predator and wants to swat at things that come in range, not to have to chase after it or leave her comfy spot. She had a short walk, mostly a carry, which I cut short after she started mewing. She was happiest when someone sat beside her.
Tonks was adorable. Into everything: wanting to climb in every cabinet, play with every toy, ride on your shoulder, and see if whatever you’re doing is a good game. She had a good walk, especially when she discovered the end-cap with catnip toys: she thought it was a great idea to have them all at her level where she cd sniff each in turn. She wanted to play with everybody, but nobody wanted to play with her except me. What a great little cat.
In the still-new-at-the-Cleaner-thing department: I forgot to check off the boxes on the clipboard. Sorry about that.
health concerns: none, but I did notice that (1) none of the cats ate their wet catfood and (2) they all love to sneak into each other’s cages and use other cats’ sandboxes.
—John R.

UPDATE (Friday morning)
And yesterday comes the news that little TONKS got herself adopted and by last night was settling in, already making herself v. much at home. A happy ending. Here's a picture to remember her by: 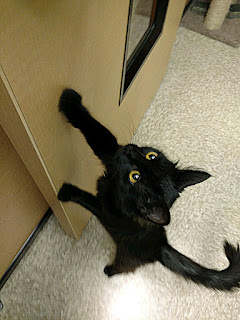