The Week in Cats

So, last week I went in and walked the cats (Sheena, Peetie, and Old Man Hank) twice

It all started Tuesday morning (the 10th) when about a hundred crows all started cawing at the same time, a sure sign something has gone wrong (they were even joined by some seagull keening). Sure enough, checking below our feeder I found an injured pigeon, clearly the victim of a hawk or cat. I managed to get it to the Sarvey animal rescue folks on Rainier, who think it has a good chance of pulling through. Then, since I was already in Renton, I thought I’d swing by and see if any of the cats wanted walking.

They did. All three had a turn, followed by Hank having an extra turn, since he seems to have been having a hard time lately.

I found out that everyone in the store knows HANK, greeting him by name. He loved being out and about. 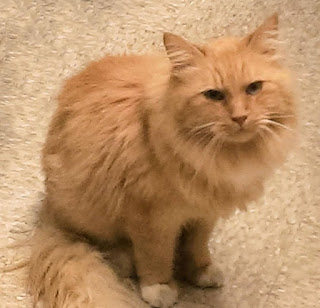 One important thing I noticed is that Hank is afraid of dogs. I was holding him when a dog went by, and he trembled as long as it was in sight. And that was a smallish, well-behaved dog that never even saw him. So that would tend to suggest that a home with a dog might be hard on Hank.
Today (W. Jan. 11th) there was more walking. I noticed that HANK has two modes: he mews when anxious or exploring but is quiet when curious/interested or in stealth mode (moving away from a dog, for example).  Also, Hank likes you to talk to him. It doesn’t matter if it’s babble or whatever: he just likes hearing your voice while he’s on the leash.
Hank had disappeared when I got back to the room after Peetie’s walk, but it wasn’t hard to find him, since one of the cupboard doors that’d been closed when I left was now ajar. Sure enough, he was in there where he’s not allowed, happily sitting on laundry.

PEETIE  is getting better at the walks — he no longer tries to get under shelves or the like (Sheela’s also much better about this). But he is undecisive. When put down he’ll go back and forth up and down the same row, unable to decide where to go next. He is getting better at recognizing how to get back to the cat-room from pretty much anywhere on that side of the store. He saw some dogs and, while not pleased, stayed calm enough.  He also purred for me back in the room, and enjoyed the string-and-chain game. 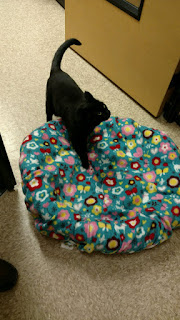 Sheena does not approve
When it was SHEENA’s turn, she’s also doing much better. She mostly gets carried around the store: when I put her down, she goes in circles and mews. She clearly has no sense of direction, and no idea where she is in the store or how to get back home again. Think the carry-about is worthwhile, though, for the change of scene and the getting her attention from people in the store. Plus she’s getting less fearful at being out of the room, though still on the anxious side.
We had some potential volunteers come in today; I gave them flyers. They petted all three cats; Sheena was particularly glad to get attention from them.
Here’s hoping all three find homes soon, esp. Hank.
—John R 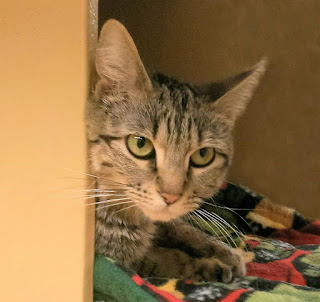