So, Monday of last week marked the last day before we went back on the low-carb diet after holidaytide feasting (i.e., eating all our old favorites; anything we want).  And as a way of marking the occasion, we had planned to go to The Museum With The Stupid Name* to see their Star Trek exhibit. Unfortunately, we got a bit of a late start, and baulked at facing Seattle traffic. Default to plan B: a trip down to Tacoma to visit the LeMay car museum.

We've been here before, but the exhibits change from time to time, and besides it's a really neat place. My favorites remain the Ford Model T and Model A's, which I think just represent in my mind the default of what a classic car shd be like.**  Which is not to say I didn't appreciate the many, many other neat cars they had, particularly the Packards.  The most interesting car was the Stanley Steamer: they had the hood up so you cd see the boiler, and get a sense of just how complicated this car was to drive. There was no sign of a firebox, which was puzzling. It's easy to forget that once upon a time we had a choice: in those early days there were electric cars (reliable start, quiet ride, low mph, limited range/charge), steamers (great cars but more likely to blow up than gas-powered cars), and the gasoline-powered cars (great range, higher speed) whose descendents ruled the road for the next century.

Among the other notable cars I saw a Crosley (my father's first car was a secondhand Crosley, or so I'm told), their Cord, some 'James Bond' cars as part of a British Invasion exhibit, and much else. I was on the look-out for a mid-50s Plymouth, this being what my grandmother drove before she traded it in for the push-button car, but to no avail.

As the visit wore on I found snippets of songs about cars ("gee our old La Salle ran great") running through my head. You'd think the line that kept running through my head wd be "they took all the cars and put them in a car museum"*** but no, it was as I was motivating over the hill, sparked by seeing a Coupe DeVille, the very next line being I saw Maybelline in a Coupe DeVille. And sure enough, now that I was looking for it I spotted a V8 Ford not far away, that being the other car called out by name in Chuck Berry's song, one of the first great rock n roll hits (though I prefer Johnny Rivers' cover version, recorded about a decade late).

All in all, we spent hours there and had a great time. I've since learned that the original site for the LeMay museum is still open, so we'll have to head down there sometime (our previous visit having been quite some time ago, before they opened the new site).

Finally, here are some photos the museum took, which I think came out pretty well: 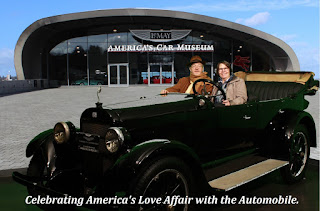 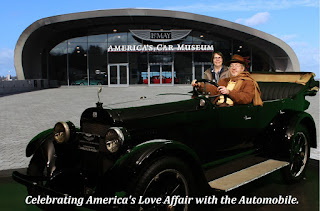 And here are two that Janice took of the Stanley Steamer. 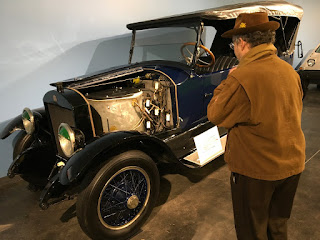 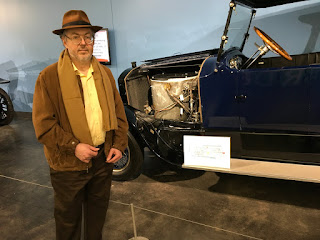 current dvd: THE BEATLES Saturday morning cartoon (last seen by me in about '67, when I was seven years old and they were being broadcast new).


*MOPOP, formerly the EMP; affectionately known as 'Paul Allen's Attic'; the one that looks like kaijun fewmets but includes such interesting exhibits as Stoker's typescript for DRACULA, Buffy's stake ('Mr. Pointy'), and an unpublished letter from J. R. R. Tolkien.

**got to ride in the rumble seat of a Model A once, and though far from comfortable it was great.

***with apologizes to Joni Mitchell
Posted by John D. Rateliff at 5:14 PM